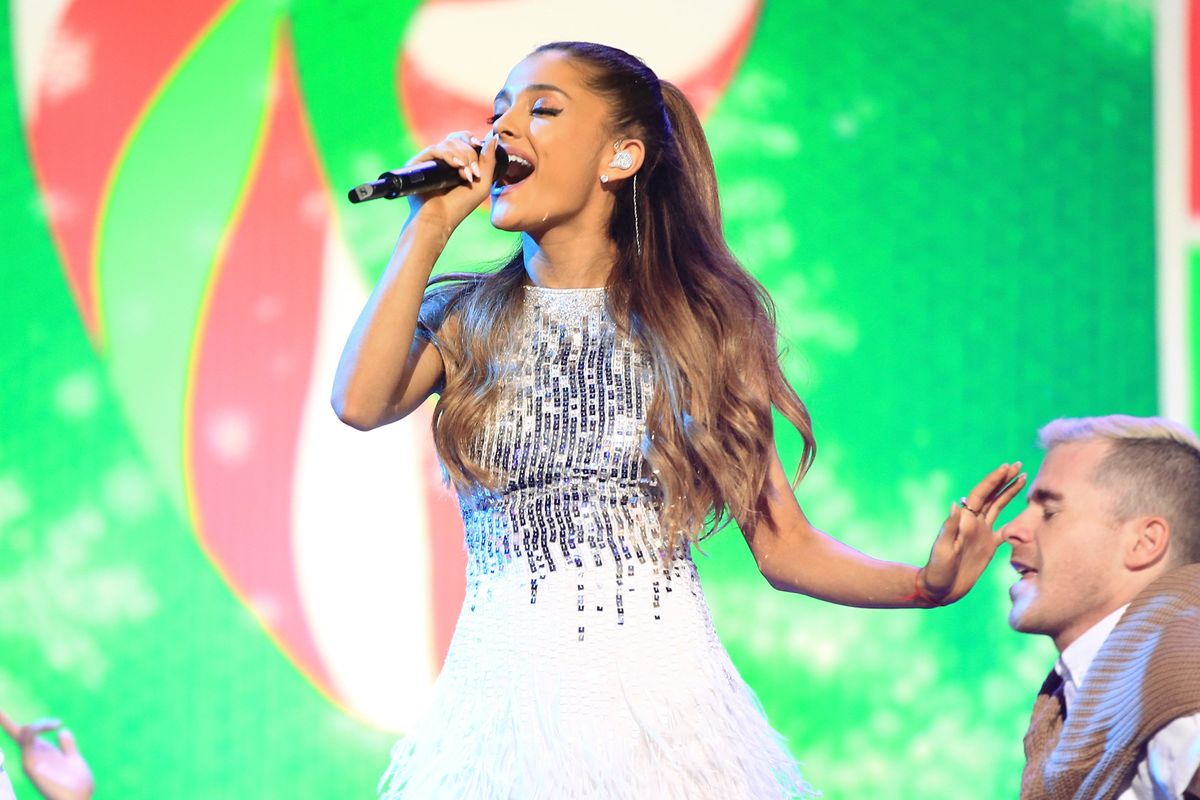 Do not be shocked by the existence of this list. Thanks to patriarchal reinforcement of binaries, we understand that holiday music is either wholly inoffensive and puritanical in essence or, like, jaw droppingly horny and sacrilegious. You know: "naughty" or "nice." Furthermore, the holiday season is chock full of camp, and every pun about "unwrapping gifts," "milk and cookies," Santa's cries of "ho, ho, ho" amid "sleigh rides" before "sliding down chimneys" packs enough innuendo for any dirty mind to reinterpret popular carols however they please — or to invent their very own. There are countless musical examples depicting people fucking for the holiday, but here are a few of our favorite Santapop™ comfort gems from over the years. Because it's cold outside and sex makes for a perfect yuletide warm-up, admit it.

In 2016, Ariana Grande made a steamy-on-purpose Christmas EP as a sequel to her lightly suggestive 2014 installment, Santa Tell Me. On Christmas & Chill, Ari blends her love of trap-inflected pop and wraps it in brazen sexuality for the holiday season. On "Wit It This Christmas," she's literally not even trying to mince words: "Are you down for some of these milk and cookies?/ Down for loving, you'll be my drummer boy/ And I'm the only drum that you gonna play."

Most people remember 3LW's "No More (Baby I'ma Do Right)" back in 2000 and then, after they awkwardly became 2LW, the Cheetah Girls franchise starring members Kiely Williams and Adrienne Bailon. But did you know that 3LW (when there were two LWs) made a Christmas album? Well, you're all welcome because Naughty or Nice is a genuine artifact from the aughts, and "Naughty on Xmas" pretty much explains itself. We do wish lines like "you can cut my Xmas tree" and "I'll slide down your chimney" weren't so literal and like, more explicit, but I imagine that the ladies wanted to be able to sell copies of Naughty or Nice in Walmart, so.

Right in the era 3LW thrived was another teen-pop sensation named Willa Ford. As the then-resident bad girl of pop, Ford's music was full of double entendre that might read now as shockingly direct. Why would her one-off Christmas single, a manic update of "Santa Baby," be any different? On her version, which is about exchanging sex for material gifts, she demands shopping trips in Paris (stick around for her crazy French accent) and... five Speedo-wearing boyfriends to play with on a Miami beach? I need the number of whomever Ms. Ford's sugar daddy was back then because those gifts are beyond generous. Honestly, go off.

Willa Ford is one of those who walked so women like Slayyyter could run, it's true. And by 2018, innuendo is pretty much nonexistent when you can just be straight up grimy. Not that we mind in the least bit. The internet pop girlie's glitchy "All I Want For Xxxmas," produced by and featuring Ayesha Erotica turns in the filthiest wish list we've ever heard. Slayyyter's desire "To get fucked, take a big hit, get my tits sucked" is fueled by, what else: "an 8-ball of coke and a pair of new tits." Not that she's in the least bit apologetic. As she tells Santa, this is just "how I live." Same?

I love the use of AutoTune and trap beats on Slayrizz's amazing "Thotty or Nice," combined with her very earnest ad-libs. It is very funny, also, to hear her sing passionately about going for "sleigh rides," when we all know she's not talking about innocently sledding down snow-covered hills. I am just so glad this exists.

I feel like then-17-year-old Justin Bieber was a little misguided in being made to sing: "You leave some cookies out, I'mma eat 'em all," after singing about kissing a dream girl underneath "every tree." But here we are. Serious q: why is / how did "eating cookies" become the go-to symbol for holiday boning? Are cookies some kind of aphrodisiac? Asking for a friend.

What is perhaps most lovable about Lady Gaga's "Christmas Tree" is that it sounds like it came from Gaga herself — as in, cheap, blown-out production and all. One can't help but imagine the star and Space Cowboy getting wasted on eggnog cocktails and fucking around on Garage Band in her Lower East Side apartment on Christmas Eve. "Christmas Tree" is something of a bargain-bin leftover from Gaga's beloved starving artist The Fame era, and it sounds totally raw and unmixed. As a bonus, it also translates beautifully to drag numbers by upcoming New York queens. The "fa-la-la" folly of a hook alone has probably inspired many a baby queerling to rub glitter and grease on their knuckles and leather jackets and go out clubbing well into the New Year. Tell me I'm wrong.

A parody of thrashing '80s hair metal, Steel Panther's "Sexy Santa" is a mess of... so many things we didn't know we'd ever hear or need. I mean, what on earth: "In the back of his sleigh he's got some hoe hoe hoes/ They're lickin' eggnog drippin' from his firehose."

Wishing you and yours the steamiest of hoe-lidays. See you in 2020!