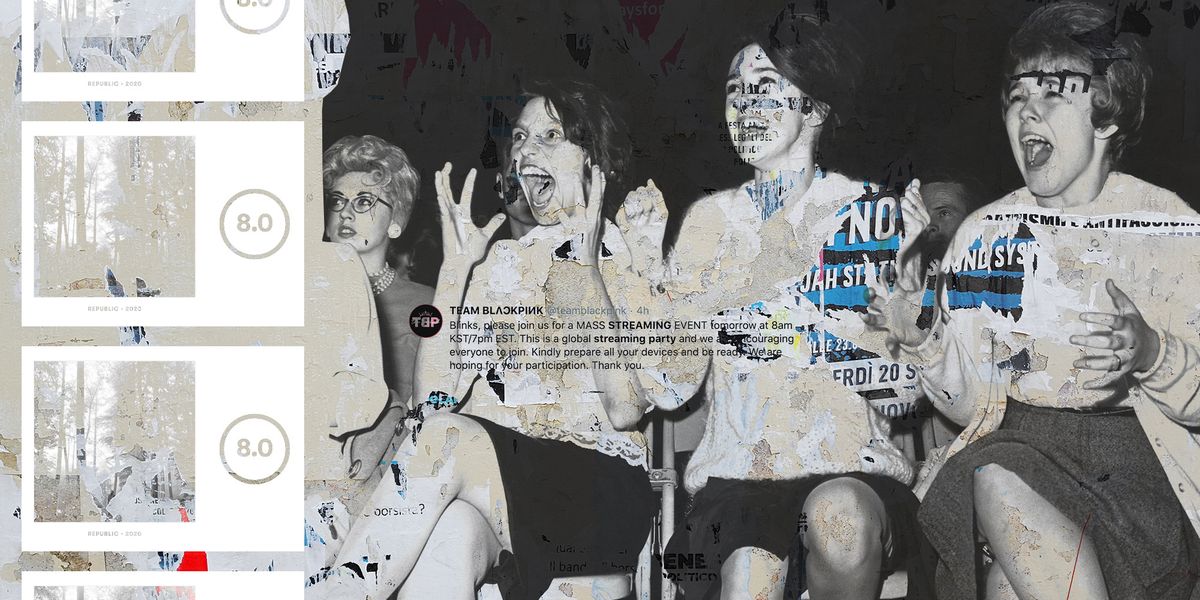 Do We Need to Separate 'Stan' From 'Fan'?

Fan culture has evolved rapidly in recent years. The internet has allowed fans to share their private obsessions with the world: with other fans, strangers and, not without some element of danger, the artist themselves. This new level of access, particularly in music, has warped the concept of fandom and earned it a new moniker: Stan. Coined after Eminem's fictional, murderous fan from the 2000 song of the same name, the term was initially used to describe fans who went above and beyond, engaging mostly online to excessive degrees.

Experts disagree on when "stan" entered common usage, but it appears to be around the mid-10s, with the word being added to the Oxford English Dictionary in 2018. But as words are used more frequently, they often lose their power and meaning. "Stan," which was once only applied to a very specific type of fan, has become conflated with fandom more generally. When we like something, we stan it, when we're rooting for someone, we stan them. But when stans can be guilty of such toxic behavior, such as speaking violently to their faves on Twitter, nasty infighting, doxing journalists or bullying "haters," it does well-meaning fans a disservice to lump them in together.

Covered by the anonymity of the internet, most stan accounts hide behind their fave: their profile photos are of the artist, their handle is a reference to them, their location is fake. Individually, they aren't capable of much beyond some light cyberbullying, but as a collective their power can be immense and overwhelming, and a few recent incidents shine a light on just how so. Stans are powerful and organized, able to take down anyone they disagree with.

More recently, stan entitlement has extended to insisting that the entire world value their artist as much as they do. Loving an album isn't enough: they need glowing reviews, 10.0 Pitchfork ratings, 100 on Metacritic. Anything less is unacceptable, and they'll go to enormous lengths to make their displeasure known. When Pitchfork writer Jillian Mapes recently gave Taylor Swift's Folklore a (very good) 8.0, they harassed and doxed her, creating a (little reported on) rift in the fandom. Not every swiftie came for Pitchfork, but it began to feel like they were uniting to take down music criticism at large. By unintentionally conflating the words "stan" and "fan," we give some legitimacy to stan behavior and disregard fans who don't partake in it.

With unprecedented access to artists, some stans start to feel entitled to their fave's time and energy, growing bitter when smaller artists succeed, which Waterparks' Awsten Knight pinpoints as the time when his own fandom became uncontrollable. Anonymity and access have granted stans an immense power, but it's worth remembering that to be a fan is not inherently dangerous. Real fans come from a position of love, and how they engage with their fandom comes from a place of love, too, whether it's through attending shows, wearing merch, or writing fan fiction. Stans tend to come from a position of, if not hate, then jealousy and desperation: they engage in their fandom by saying hateful things, harassing journalists into changing their reviews, and bullying one another.

It's easy to see this behavior as inconsequential: after all, you can just log off and walk away. But for journalists and fans who have to engage with fandoms directly, stans have made the environment intolerable. Most of the people I tried to interview on their experiences asked to be anonymous out of fear. Rose* writes about K-Pop and has been at the receiving end of what she calls "modern day witch hunts." "I've essentially given up on writing in a way that's critical of artists, and ever sharing my own opinion, because it's just not worth the stress," she says. She's gone as far as to mute her notifications and avoid engaging with fans. "I understand people are really passionate about what they love, and I am too, but it's pretty hard being told regularly by your potential readers the way you love something isn't the right way, so you deserve not to work or live."

Related | How Much Does It Cost to Go Number One?

Fandoms are complex, diverse communities, with their own factions and friction. While some fandoms are known largely for being more toxic than others, they have people within them who are tired of being lumped in with their abusive peers. Isabella, 24, has been in the Taylor Swift fandom for over ten years. When incidents happen within the fandom, like the recent furor around Swift's Pitchfork score or swifties sending "death threats to various people, like Swift's ex-boyfriends and journalists," she feels ashamed to be a part of the fandom.

Sonia, 32, is a Twenty One Pilots fan who regularly sees toxic behavior within her community. She believes it's important to distinguish between being a "stan" and being a "fan": "I personally think it's only a name, but stanning has a more intense vibe to it. The origin of the word is very unhealthy, but I think the word has been reappropriated by fans to just mean you're a hardcore fan." A journalist I spoke to agrees: "Fandom communities often breed intensity to an nth degree that makes it difficult to enjoy without feeling like there's something to prove, which means there's someone to prove it against. Stanning is, I think, Othering people who aren't part of the community," she says.

It isn't just journalists and haters that find themselves on the receiving end. Casey*, 31, is a Panic! At the Disco fan, and used to engage in some toxic behavior herself. "I know that I acted much like a bratty teenager. All of the drama was on the level of high school and I thrived on it," she confesses. "There's a power trip that you feel when you and a group of fans attack another fan who has been 'problematic'," she says. Apparently, it's common for one fan to send a tweet to a group chat, and then for the group to disperse and bully another fan into deactivating. "It's usually something miniscule that is seen as problematic, but could easily be rectified by properly educating the person. It's toxic and it's wrong," she adds.

Casey stopped when she realized that she didn't like how she felt when she hurt someone, but not before she herself was forced into deactivating. Getting a new account wasn't enough: "The people who constantly attack others usually keep tabs on fans they hate and will announce when they've changed their handles," says Casey. She still considers herself a Panic! At the Disco fan, but agrees that we need to separate the word "stan." "I'm still a fan of all of the bands that I love. I don't consider myself a stan because in my eyes, stan means bully now. Being a stan means that you live on Twitter and strive to remain as unproblematic as possible while being the most toxic person alive. It's oxymoronic, really," she says, adding that the bullying has had a lasting effect, leaving her with trauma. "It feels lonely, alienating, and heartbreaking."

Where artists are aware of toxicity within their fandoms, do they have a responsibility to speak out? Isabella thinks so: "Artists have so much power over their fandoms, and I think if artists speak out about these things then they can stop them." The very least that artists can do is avoid being thin-skinned – when an artist like Lana Del Rey, Ariana Grande or Lizzo, who has a massive platform and infinite power to wield, chooses to use it to put a reviewer on blast for giving them a less-than-gushing review, they encourage their stans to pile-on. For a star of their size, it's irresponsible, immature and dangerous. The line between artist and fan and between critic and artist has never been thinner, and artists and stans both need to realize that criticism, especially even-handed, fair criticism, is necessary.

As Vulture pointed out earlier this year, stan culture is long overdue a reckoning. But as for the stans still engaging in this behavior? Consider that, however innocent you may feel hiding behind anonymity, the immense power of a tidal wave of blank squares screaming hate still feels personal to journalists and other fans. Consider that it doesn't matter one bit whether a journalist or other fan likes something as much as you do. Consider returning to the reason you loved that thing in the first place; the good things it made you feel, how at home, how alive.

Consider approaching your fandom from a place of love, not jealousy or bitterness.