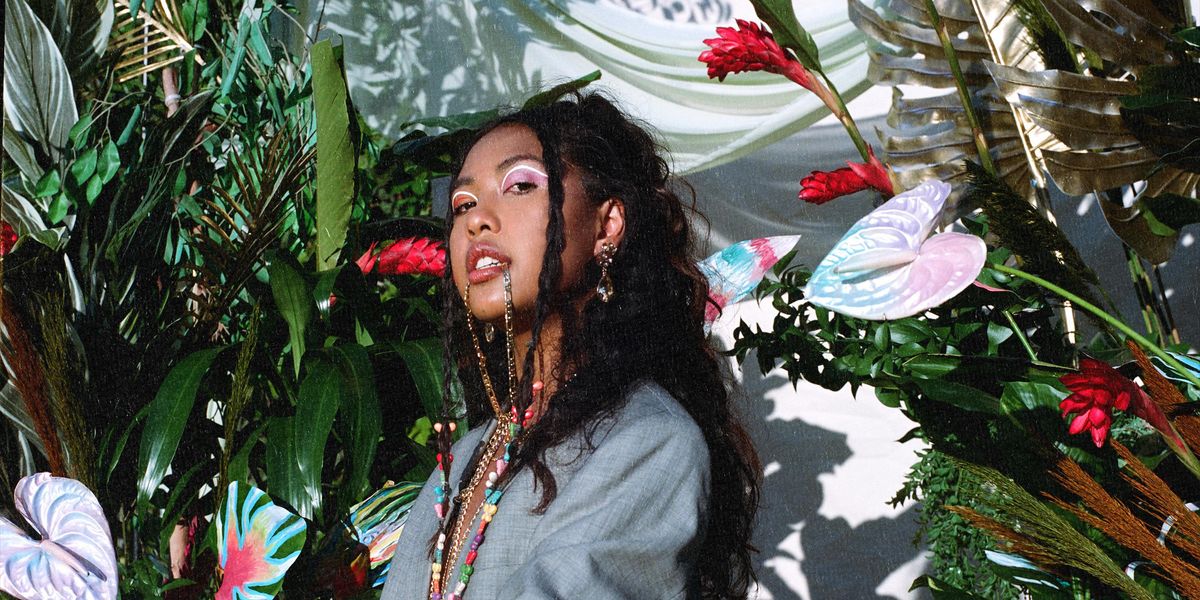 "I'll know it's really real when all my friends keep telling me that I'm glowing," Satica sings on "Glowing," from her forthcoming summer mini-album, You're Glowing. Carrying this euphoric sentiment across ethereal vocals and gentle instrumentation, it's an endearing track that tells of the 28-year-old singer's conscious decision to "milk out the moments that bring peace."

The mini-album, set to drop on August 6, was a pandemic-era passion project for Satica, who says this is the most "musically and creatively free [she's] ever been." Like many stuck at home, the 28-year-old Long Beach native says she reached a watershed moment last year: "'It was a tough time. Seeing everything on the internet. Things in my personal life. Glowing' was the first happy song I wrote after a string of really sad songs. I want my music to be a place for people to be present and feel okay."

Related | Thuy Is in Her Bag

Born April Nhem in the Cambodian refugee enclave of Long Beach, California, Satica says she always loved to sing but it wasn't until 2014, when she was working as a server at a restaurant in her hometown, that she got a fateful call from her would-be manager, Far East Movement's Kev Nish. "I used to work until 11pm, and it was a weekday. So by the time I drove down to LA to meet them it was midnight. I was tired as shiit. I thought I'd just show them some music and leave, but they told me, 'We have a song for you to write.'

As a proud Cambodian-American artist, Satica says she's troubled by current events like the recent wave of anti-Asian hate. She says she wishes people could "see the beauty in our culture" and in showcasing Khmer culture, she feels she can bridge barriers. In the video for her 2019 single "Ode to LBC," (short for Long Beach, California) for example, Satica spotlights the traditional Cambodian dance, apsara, alongside nostalgic imagery of the neighborhood she grew up in.

While her cultural background pushes her to work hard, and informs her overall ethos as an artist, Satica says she hopes for that true moment of equity where Asian-Americans can create music that can stand on its own. We caught up with the singer to talk about her journey and her upcoming mini-album.

How do you think your music has changed?

I'd say it's more musically organic, from the instrumentation to the soundscapes and vocal arrangements. While a lot of my past stuff has been more electronic, I also feel comfortable with R&B so that shows. I'm really happy with it. The first record on the project is called "Glowing," and I think I wrote it during this pivotal point in my young-adult years. It took a lot of healing and self-awareness for me to realize who I am and what I feel when my cup is full.

I think it's empowering that you've been able to make something so positive with everything going on, from the pandemic to anti-Asian hate.

To be honest, it's all still affecting me now. As an Asian-American artist, really any type of artist, we can process those internal struggles through music. At the same time, realize that you can't take on the entire weight of the world.

Do you feel that you've historically faced challenges breaking into the music industry — specifically for being Asian, and especially Southeast Asian?

Back in 2014 when I started, I don't think the entertainment industry was really as open to Asian artists and talent. I come from a small place, a small neighborhood [Long Beach, California, a Cambodian immigrant enclave] and I never saw people who looked like us on TV, on billboards. So I always wondered, "Is this attainable?"

Do you think having an Asian-centric label and management like Transparent Arts has helped you navigate those waters? Especially with Kev Nish, your manager, having been part of such a successful act like the Far East Movement.

Of course. I wouldn't say they sheltered me, but there was very much that sense of family. Being Asian-American themselves, there was no one better I could have asked for to mentor me. When I first signed, I did artist development for a while, and I didn't put up new music until 2017. And ever since the beginning, it really seemed like they just really appreciated what I was doing and wanted to see how they could grow it."

The most visible and popular Asian entertainers are typically East Asian. How do you spotlight your Southeast Asian-ness?

I remember right from the beginning Kev told me they wanted to help me spotlight this part of my culture. They even convinced me to use my real name. My whole life I was taught to kind of like, go with the westernized name, to make it more convenient for other people. And they were the ones who said, "Go by your real name; your real name is beautiful."

The beauty of the culture is important. And there's a lot of Cambodian culture and even traditional dance represented in "Ode to LBC," and the music video which was filmed in your hometown. What motivated you to take that on?

I feel like sometimes our actual culture is overshadowed, and it was really important for me to highlight the fact that my culture is beautiful. Yes, we've gone through a lot of trauma, and our parents have survived a genocide, but I also need you to understand the their resilience. We're not model minorities, but we're an ancient culture with so much grace. I contacted the Cambodian Royal Ballet to be a part of the video because I've always seen apsara, the traditional dance, as a symbol of that beauty. I want young Cambodians to be proud of all the things I used to not be proud of growing up.

Have your parents supported your music career?

When I first started, they told me to pursue music as a hobby. I don't want to generalize, but they're tiger parents in a way. So I made sure I finished school, and I made sure I had good grades. And at that point, they couldn't say anything. And as time goes on, there's more understanding.

There is not really any such thing as an "Asian-American sound." We're not quite Asian. It's not K-pop. How do you define your sound in terms of genre?

You're right — there's not even a sound that we can attach to being Asian-American. At the end of the day, I just gravitate to things I personally like. I'm influenced by R&B as I am emo rock. Growing up, I listened to Brandy and Destiny's Child, but I also had a phase where I loved My Chemical Romance. So it's all over the place. That said, one of my biggest goals in the future is to integrate traditional Cambodian sounds and instruments.

Up-and-coming or current artists you're listening to?

What advice would you give your younger self?

Focus on your craft. But also believe anything is possible. Don't worry about your skin being brown. Whatever you're insecure about, let it set you apart and make you stronger. Hold it close to you. If you don't see someone out there that looks like you, know that there is just you, so magnify what makes you different. Make your existence as large as possible.