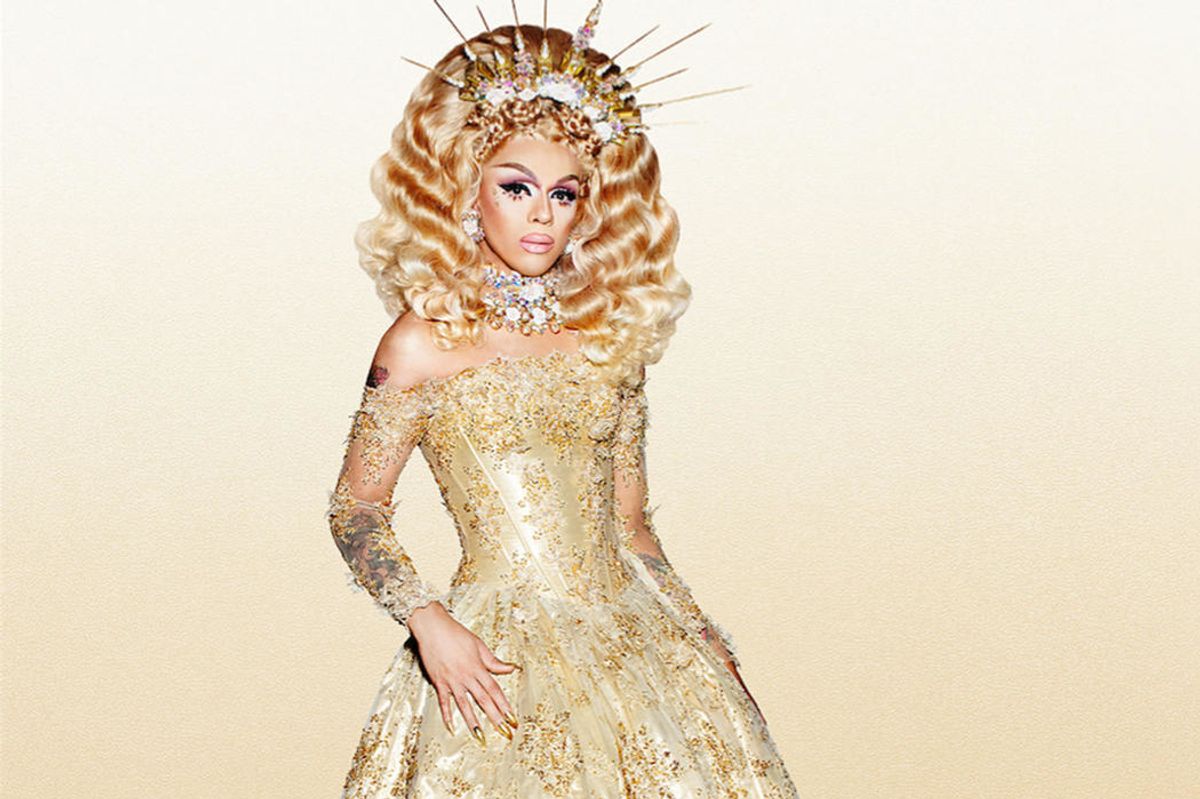 RuCap: Aja On Her Elimination, Sugar Tits and Season 10

After a triumphant streak of wins that included her best TV fashion moment to date, Aja was sent home from All Stars last night when Bebe Zahara Benet beat out Trixie Mattel lip sync battle to Diana Ross' "The Boss" — a lip sync that seemed rigged if you're a believer of the popular fan theory that Bebe is actually a mole. Aja's fate was seemingly sealed the moment she mispronounced France Joli's name while defending her handcrafted disco look and her Andy Warhol-inspired soup can. Aja's time on All Stars may not be quite over — we still don't know who the three hooded figures were at the end of last night's episode, so she could very well return for her revenge. But one thing is certain: the queen who walked offstage last night was a very different girl than the one who struggled throughout season nine.

Last night's episode was obviously very emotional for you. How are you feeling now that time has passed since filming and now that the episode has finally aired?

It seemed like your goal this season — aside from being sickening and winning — was to redeem yourself from whatever mistakes you felt you'd made on season nine. Do you think you accomplished that?

My goal was never to redeem myself, my goal was to actually do the competition. Doing season nine was so circumstantial for me, it was not the right time in my life to do that, but it was also the only chance I had to get to a better place. I went into All Stars 3 having no underlying issues, no issues at home. It was time for me to explore, have fun and do the competition the right way.

What was it like to walk into that work room again so soon after leaving it, going almost directly from season nine to All Stars?

Obviously we'll know for sure next week, but do you think the elimination would have gone differently if Trixie had won the lip sync?

I don't think so. She had that moment with Shangela and Shangela had one more win over my head, she wasn't gonna go home no matter what. I still think there should have been a bottom three...but everything happens for a reason, I'm not mad. I'm just happy to have even been there.

How did it feel to have the judges finally affirm and appreciate your style, even going so far as to say your Bcalla look for the Wigs on Wigs on Wigs runway was the best you'd ever looked?

It was very surreal. I remember walking in on season nine and [the other queens] being like "Wow, we love an underwhelming queen!" And now its like "Oh, you're serving the looks this season." It's all great. I don't think I ever needed anyone's validation, especially on my fashion, but it never feels bad to hear you're killing it.

The soup can challenge has been getting a lot of flack online, what did you think of it and do you have any regrets about Sugar Tits?

The soup can challenge was one of the stupidest things ever. Why the fuck are we wearing soup cans? It was a great idea I guess for a mini challenge. I didn't understand it. But I feel like the branding aspect was there, I will never regret Sugar Tits. Nobody knows me better than me and Sugar Tits is part of my brand. When the judges were saying "oh this is not what we know you for,' from a smart branding perspective, you don't sell your entire brand in one product, you sell it in pieces. I was selling an aspect of myself, and Sugar Tits was supposed to be a sweet soup that makes you feel like a whore. That is very part of Aja, and i'm not gonna sell all of Aja in one can. We ain't giving me out for free.

You've been one of the shows most relatable queens, and that comes across especially in the confessional interviews, because you're in some way bridging the show and the audience. Does part of that come from having been a fan of the show for so long?

Absolutely. I'm a huge fan of Drag Race; I'm on reddit, I'm on the blogs, I love Drag Race so much. I can quote every single crazy quote, I can quote the quotes nobody remembers. I went on Drag Race not only as a queen but as a fan. Maybe that's why it worked.

So are you the girl on reddit leaking all the spoilers?

Oh y'all caught me! I still wonder how people get all that tea.

It's because the gays can't keep their mouths shut.

It's because the girls are on Grindr like, let me get this date by claiming that I know the tea.

You're one of the queens for whom social media has played the biggest role: going back to your season, having your instagram photos onscreen; in positive ways being turned into so many memes; receiving hate for what people see as your 'feud' with Valentina. How has social media become a double edged sword for queens and their fans?

Here's the thing: we want drag queens to be human but then we're also asking drag queens who are basically celebrities to be human. It's difficult to humanize a drag queen and then put her off as a celebrity. You can't humanize Beyoncé, it's hard to because you can't really relate to her. It becomes a double edged sword when queens are not smart about social media. The best thing to do is be honest to yourself but appropriate, and at the same time just post good shit. Don't be boring, you're a drag queen.

Do you think Drag Race fans get too caught up in the reality TV drama and lose sight of the fact that drag is a sisterhood?

Let's be real, Drag Race is not about showing that drag is a sisterhood. Drag Race is about showing the reality of drag. The reality is, yes, there's a lot of sisterhood in drag but there's nothing exciting about that, and if we're really trying to sell a TV show, we want drag queens — who are supposed to be super catty by nature — to be real about it, talk about how they feel, talk about the real struggle of doing drag. Drag is not all happiness and smiles, and that's where most of the relatability has come from, from people admitting their personal issue, those are the things we connect to as viewers. So when we're expected to just be a sisterhood — you need to have struggle to have a sisterhood. When people think of drag in one way, that's not realistic. The fans are a little crazy, but the more mainstream the show becomes, the more exposed to more fans it's going to be, and it's just going to get crazier from there.

The season 10 cast was announced last night. Do you have any advice for the incoming queens?

One last question: is she gonna jump from there?

(Laughs) Maybe. Maybe she has.