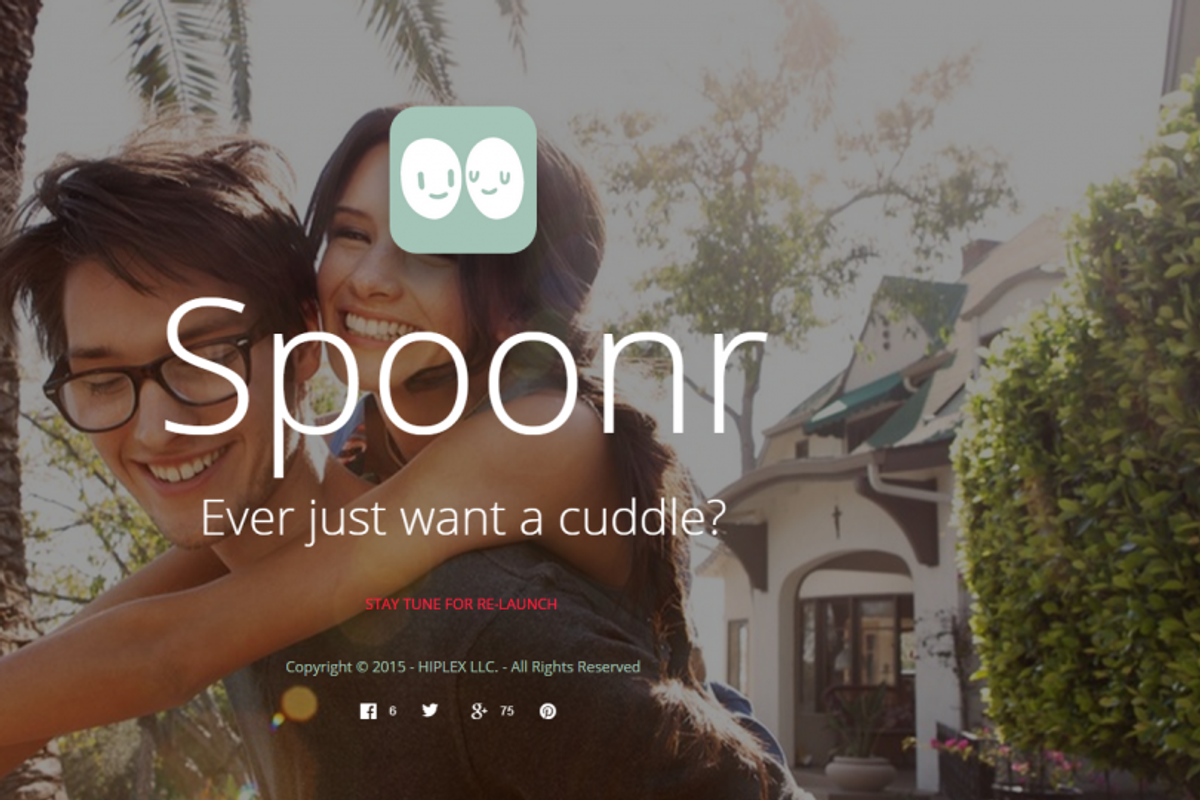 The Rise and Fall of Spoonr, an App that Connected Cuddlers

To an outsider, it was the perfect idea. Genius even. So often we find ourselves longing for human connection — to be held and nurtured like the grown-up children we are, even without the sexual element. Enter Spoonr, originally called Cuddlr, an app that helped connect those hoping to do just that — until it didn't anymore.

Cuddlr launched in September of 2014, and became the talk of the tech town. With 200,000 downloads immediately, it hit Apple's list of "Top 10 Most Downloaded Apps," and attracted outlets like the New York Times and the Washington Post. Creator Charlie Williams, a Shazam-alum, explained his vision to various publications: a sex-free safe space for strangers to physically embrace without strings or consequences, or "platonic intimacy."

The app's instructions: "To find a cuddle buddy, a user creates a profile that consists of one photograph and his or her name. The app adds a tally of positive or negative ratings following cuddling sessions and omits information about gender and age. The user can then scroll through potential cuddle partners in the vicinity and send a request to cuddle. The recipient must reply within 15 minutes; if he or she consents, then the two users will see walking directions for how to meet up."

It was never meant to be a dating app, touted as the Tinder of cuddling, and "a way of finding people near you who are up for a cuddle, without any pressure or expectation." Williams hoped Cuddlr would be a part of the larger conversations around sex and intimacy, and human need for the two to be mutually exclusive.

"Tinder is huge; Grindr is also huge. So if what you want is a hook-up, you're very well served by existing apps," Williams told The Independent. "But that isn't what everybody wants – and I think even a lot of people who are on Tinder, that's not what they want all the time."

This was perhaps, in hindsight, giving Internet users far too much credit.

The reviews rolled in just a week later, and they weren't pretty. The Post titled their piece, "I tried out Cuddlr, the 'Tinder for cuddling,' and all I got was severely creeped out," with the writer labeling Williams a "visionary," but specifying that any geolocated social app will eventually be used to hook-up (one user asked her for "no strings-attached" sex). Moreover, the founders weren't equipped for its user influx — they were working around the clock and errors were popping up galore.

Less than six months later, Williams and his co-creator shut the app down, "#OneLastHug: Today, Cuddlr closes up shop. Thanks for all the love!" they posted to Medium, delineating the all the issues that lead to app's downward spiral. Then New York entrepreneur Eugene Bentley purchased the app, and a year after Cuddlr's inception, rebranded and relaunched it as "Spoonr." Bentley boasted 300,000 followers and spoke of hoping to reach 500,000 in the following six months.

Early last year, Spoonr was abandoned and here's where the trail goes cold.

When I reached out in the hope of eliciting comment as to what happened in the 16 short months of Spoonr, I received an automatic reply and, predictably, no follow-up.

What exactly happened to Spoonr is unclear, but it's likely the app was plagued with the same issues it had when it was Cuddlr — people with motives that contradicted the app's mission statement, co-opting it to hook-up. This is not to say it was any less safe than actual dating apps (Facebook and Twitter profiles were required to sign on Spoonr, and you were able to alert the app to misusers), it's the fact that when entering a meet-up on Tinder or Grindr you are either explicitly or implicitly aware of all possibilities ahead; a pure Spoonr user would only expect one thing, and were often offered more than they bargained for.

However, the app's premise sought to provide a solution to a very valid dilemma: we, as lonely millennials, aren't touching each other platonically. There are very few places to turn if you want to be held, rather than fucked, and we shouldn't need more technology to rectify that. So if you feel like you could use a cuddle, call up a friend... they might need one too.