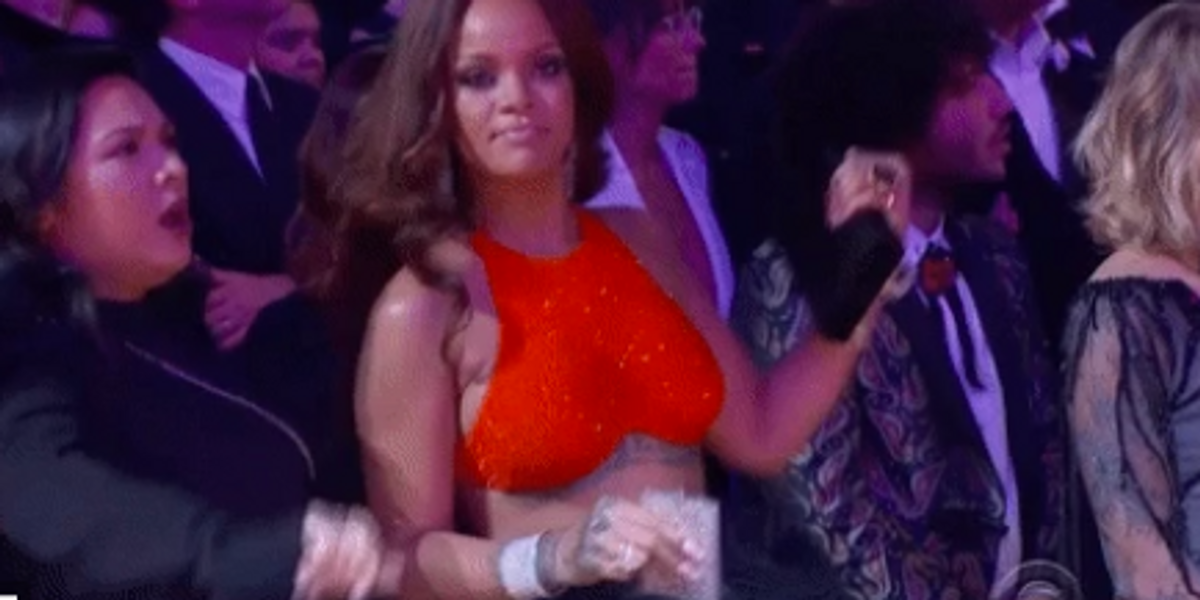 Another Grammys – the awards show where music's biggest competitors come together for four sweet hours to sway awkwardly and pretend to know the words to songs they don't like – has come and gone, leaving us with a series of golden moments that have nothing to do with gramophone trophies.

Enter Rihanna. Despite having one of the best albums of 2016, Rih, queen of all that is good, came prepared for what was obviously going to be the night of Adele and Beyonce. Bejewelled flask in hand, Rihanna treated the whole situation as one big music festival and really couldn't have given less of a fuck.

Let's take a look at everything Rihanna did right.

Rihanna, amid a sea of polite nods and conservative applause, responded with much gusto to most of the performances – likely making some lonely camera guy's night.

Rihanna made very little attempt to hide the fact she was trying to subtly turn up at an event where not food or alcohol is served, looking straight into the camera as she tried to conceal her flask.

Rihanna stares straight into the camera as she tries to put away her flask #GRAMMYs pic.twitter.com/8z7dx8pZfp
— Mashable (@mashable) February 13, 2017

Rihanna then lost her inhibitions altogether.

Rihanna danced with an unknown friend via FaceTime, à la white girl in the front row of a Trey Songz concert.

Rihanna winked at her neighbour that it was "time for another shot".

Rihanna talked through her loss of Best Contemporary album and reapplied her lipstick, probably because Beyonce was nominated in the same category. Beyonce won.

Rihanna has the best reaction to losing a Grammy to Beyonce. pic.twitter.com/OEoYsdYrN2
— Jimmy Traina (@JimmyTraina) February 13, 2017

Rihanna blew kisses at Beyonce, then shook her head smiling, thinking to herself "nothing means anything, just keep drinking."

No one can touch her.