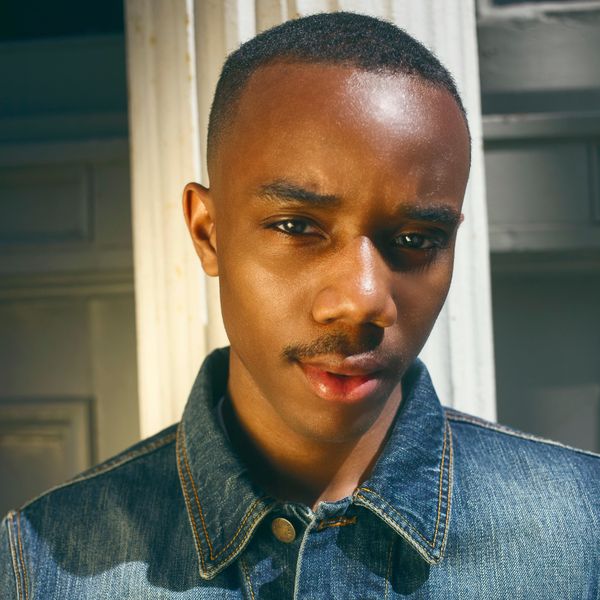 When photographer Quil Lemons was a teenager he used to run track near the Philadelphia Museum of Art. In fact, it was partially from going to exhibitions at that institution, that Lemons decided on his career path.

"My aunt used to take me to exhibitions there;" Lemons told PAPER. "There was a Paul Strand exhibition once and that's when I really put it together that I wanted to do this." Now, he's a working photographer having launched himself into the cultural zeitgeist with his now-viral "Glitterboy" campaign, and rounded that out shooting a variety of projects including four generations of his family for Vogue as well as projects for Allure and others. Tonight, in a one-day program, the 20-year-old will return to Philadelphia to show his latest series, at the museum that served as his initial jumping off point.

Inspired by the institution's ongoing Face to Face: Portraits of Artists exhibition which features various artists and creatives shot by Richard Avedon, Irving Penn, Dorothy Norman and more, the new series, titled "Detour," includes a new wave of New York-based creatives, both young and semi-established all shot by Lemons. Each comes directly influenced by a different image from the exhibition, posing these new artists in the likeness of historical figures, drawing lines of commonality between the pairings.

The process wasn't unnatural for Lemons who uses references for most of his commercial work and counts a variety of artists as influential to his overall photography practice: historically he looks to Carrie Mae Weems and Deena Lawson but also adds younger photographers like Durimel ("the richness of their tones") and Harley Weir ("her lighting") to that list. "I think that my work is different when it comes to lighting and tone but those are some of the people I look to," he said.

Here, Quil describes some of the notables he shot and the icons they channel.

These images look back to a 1984 shot of Elsa Schiaparelli by Irving Penn for Vogue. "When I found out who [Elsa] was, and that she was this big female designer and like a rival to Coco Chanel, I thought she was so fitting for Recho." Recho is also a fashion designer, running her own brand Omondi.

Chella Man is an artist who does work around the body, generally using his own body in transition as the subject. Here he is posed as Marcel Duchamp. "I actually did this because every other day on his livestream Chella shaves his face for like 45 minutes." The original print of Duchamp was made by Man Ray.

Kerby Jean-Raymond is a fashion designer, but his image looks back to Cyril Connolly. "I loved the way he was positioned," Lemons said of the Richard Avedon shot. "He was exuding masculinity but also this regality and I feel like you don't always get to see black men in this authoritative but regal posturing. I also feel like that's what he does with fashion and so I thought it really fit." With his label Pyer Moss, Raymond is currently focused on elevating the experiences of the marginalized or erased.

MaryV Benoit is a performance artist, shot as Frida Kahlo. "MaryV's work focuses a lot on her body and she's also really comfortable with nudity so I feel like they relate in a lot of different ways."

The full series is on display at the Philadelphia Museum of Art tonight.