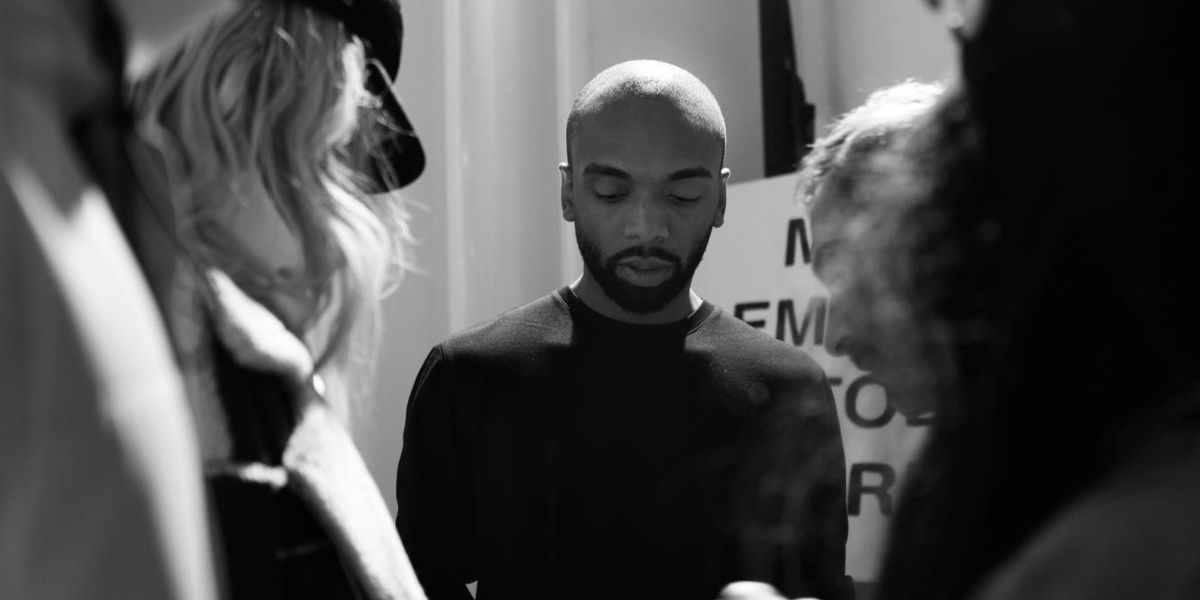 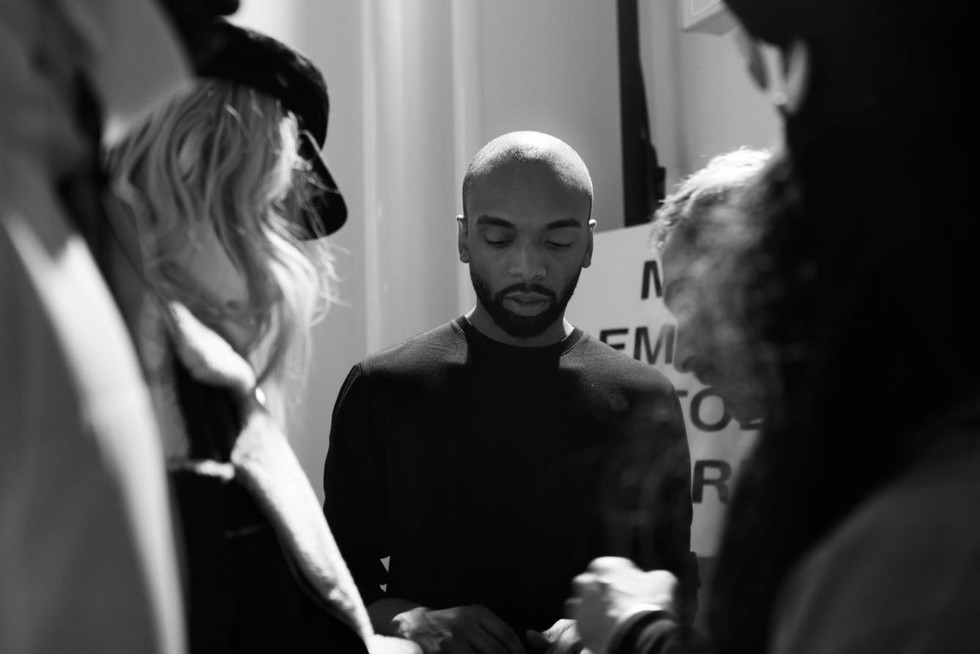 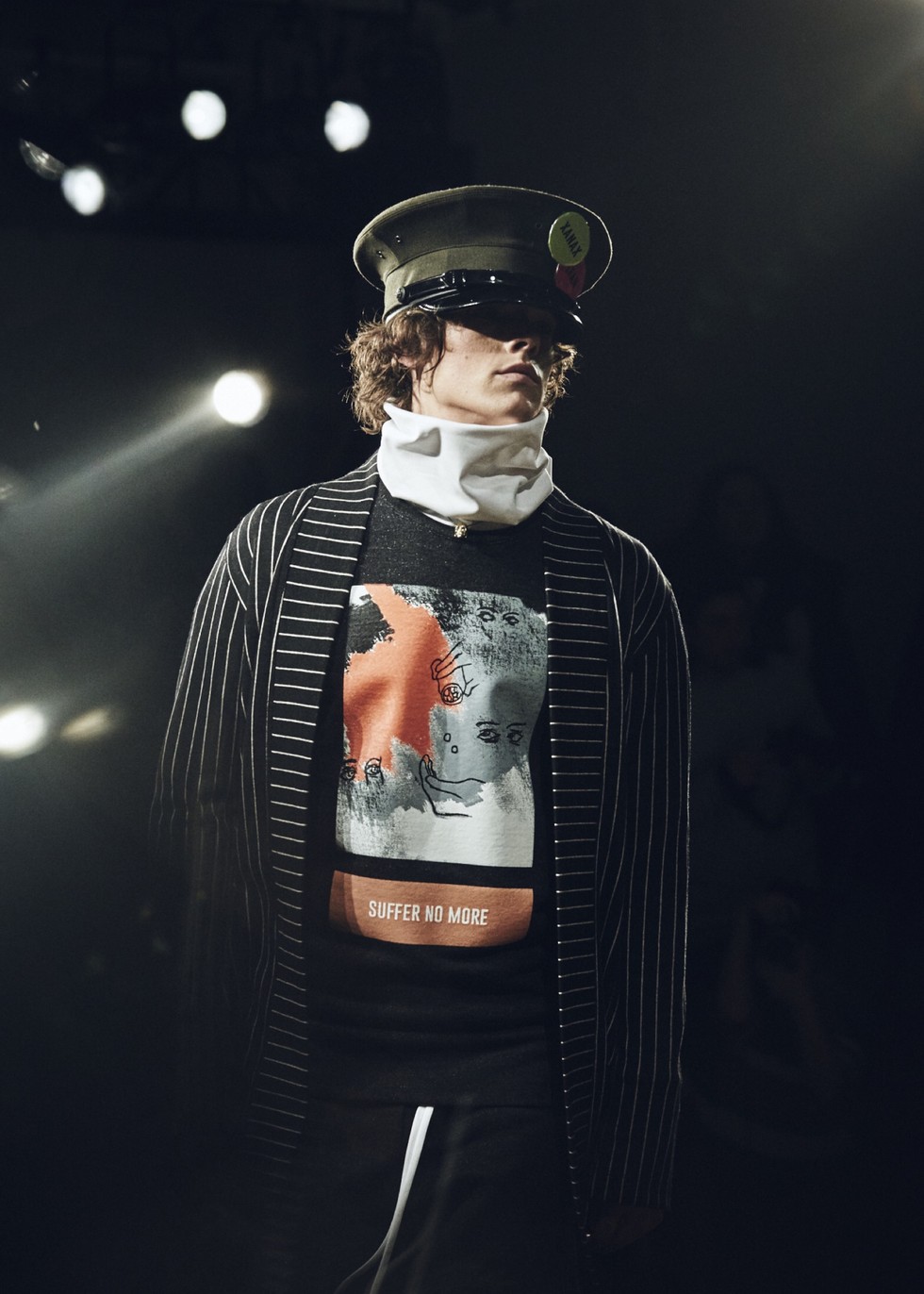 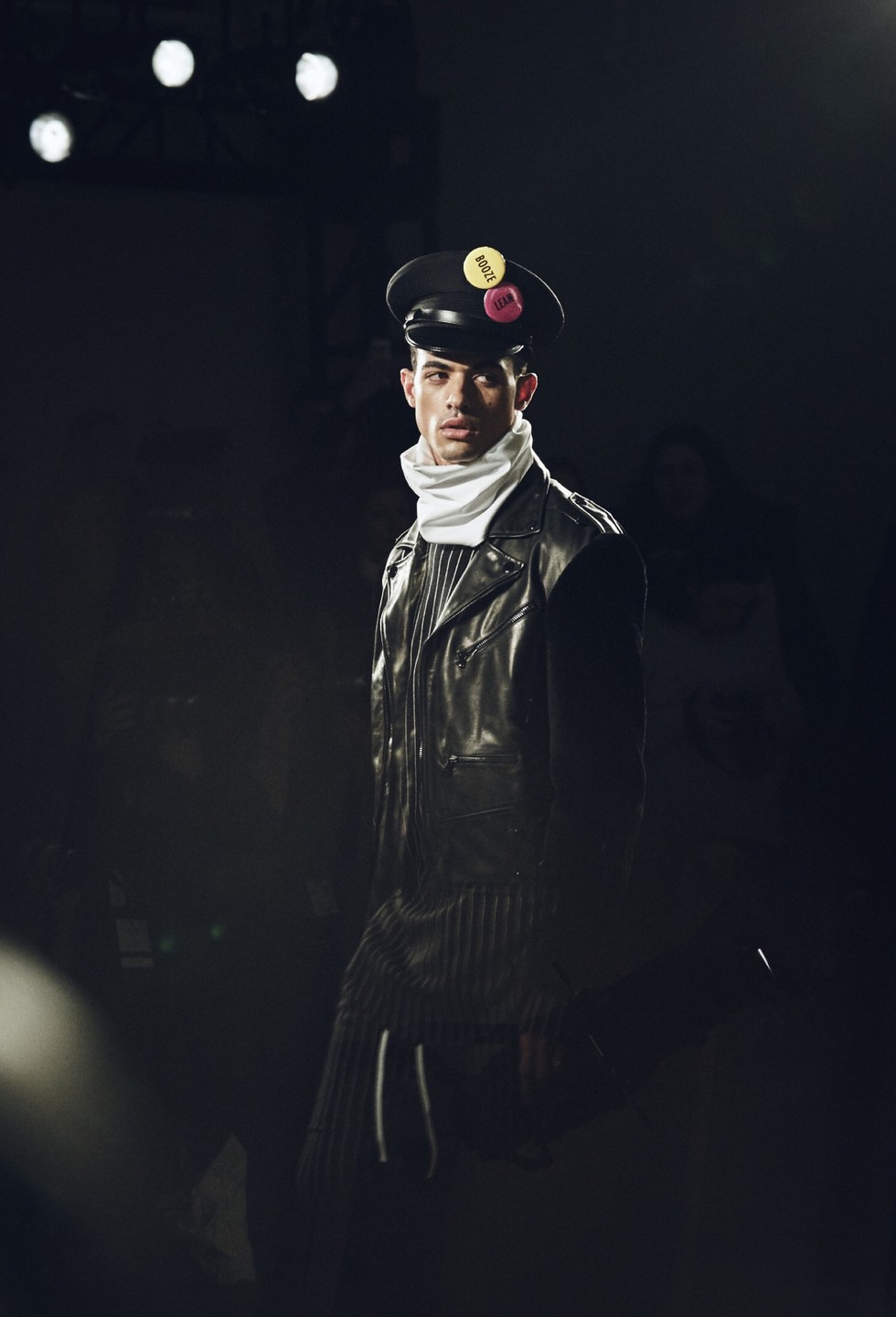 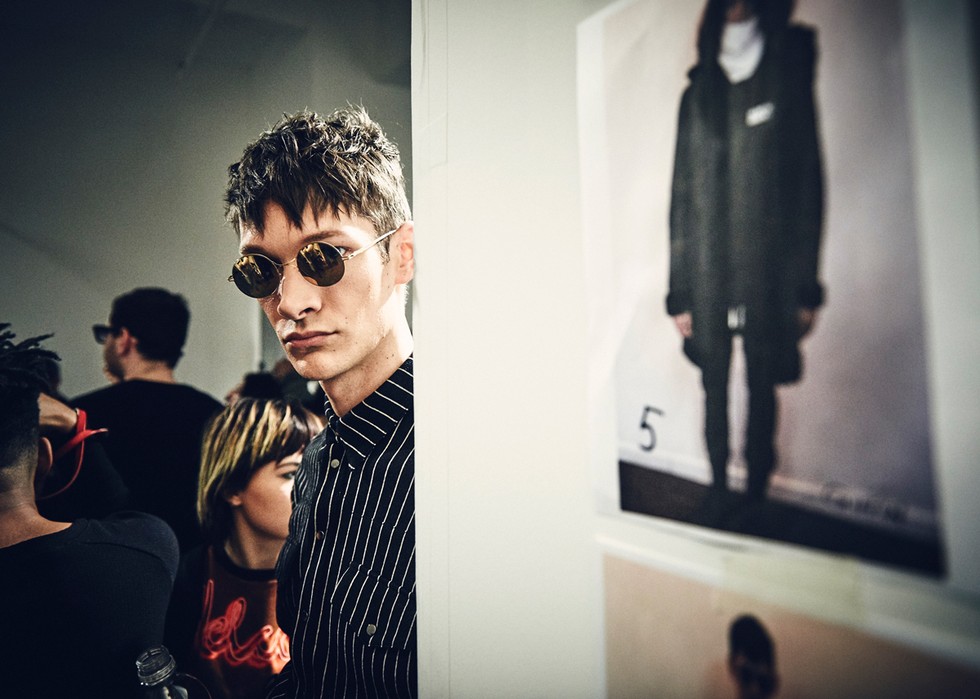 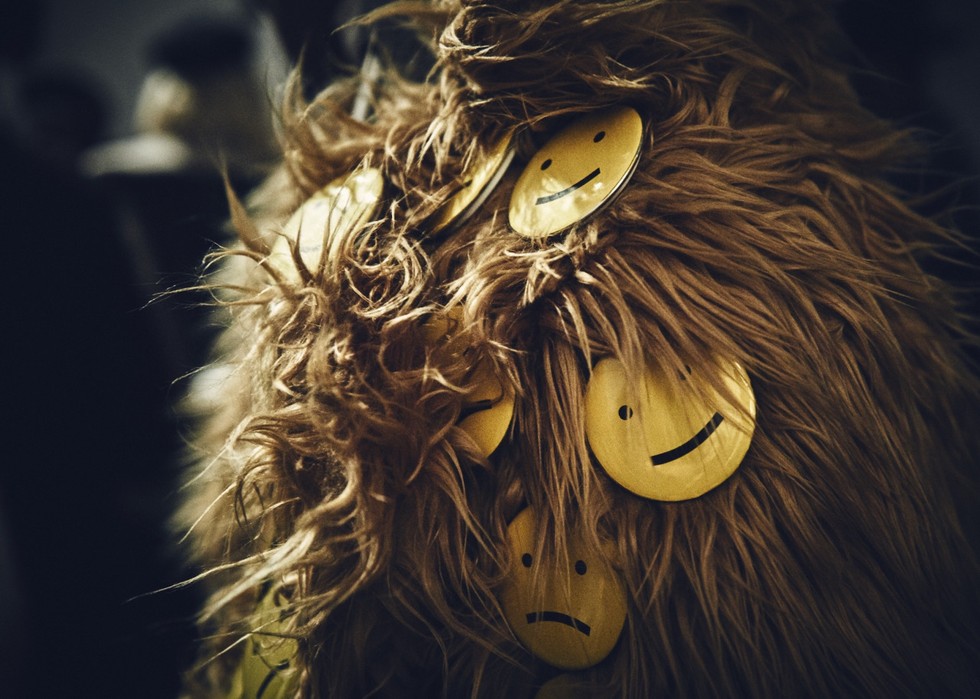 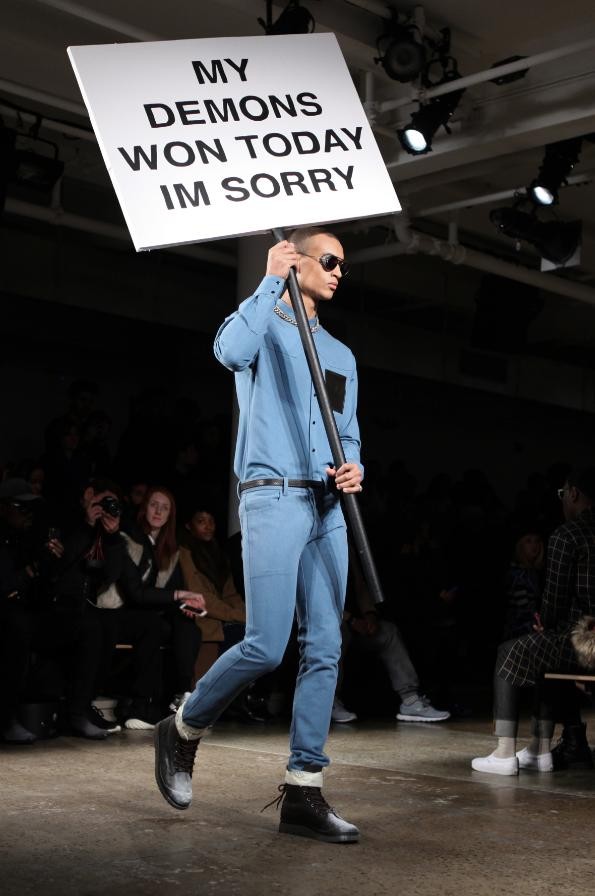 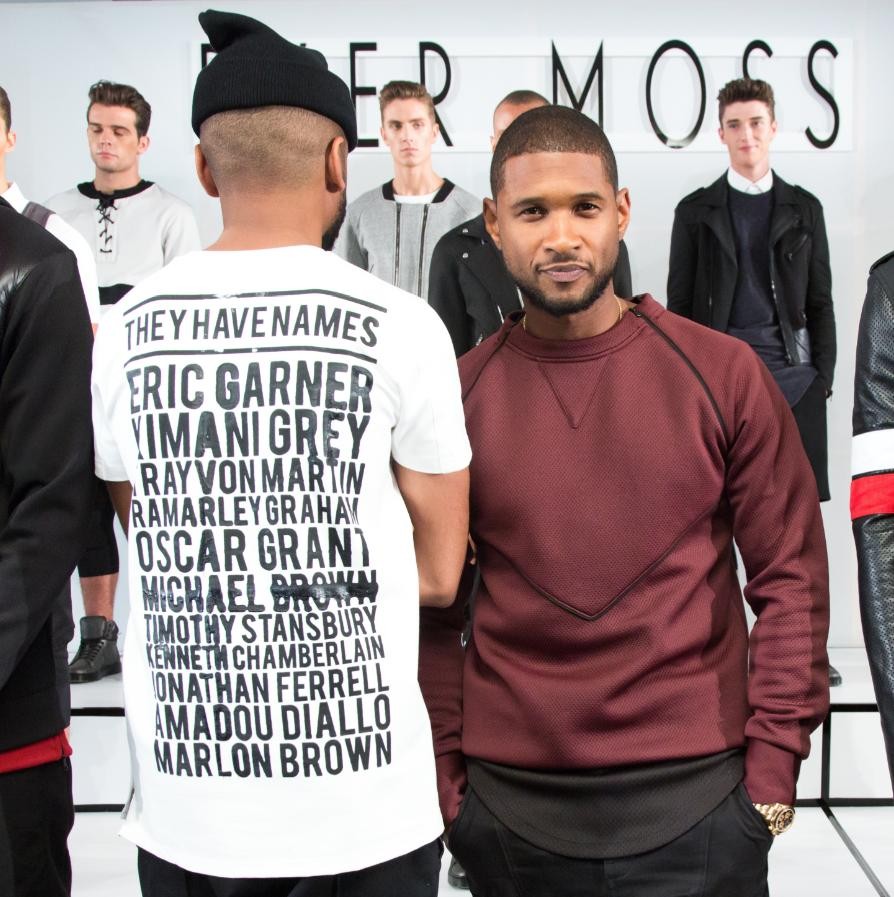 Kerby Jean-Raymond, the designer of ready-to-wear label Pyer Moss, is rushing into his PR's minimalist Chelsea showroom with a giant grin on his face. An assistant has located a trove of his favorite snack cakes, Yodels, the variant of devils food and cream rolled into a chocolate-covered tube, and all is seemingly right in the world. Simple pleasures for a designer, not quite 30, who is fast becoming one of the most watched and outspoken designers in New York. You may remember his Fall 2016 show in February that closed with a model carrying a sign quoting Black Lives Matter activist MarShawn McCarrel, who had taken his own life earlier in the week, or his one-off "They Have Names" t-shirt from last fall, the back of which listed the names of 11 African American men who died at the hands of police, including Eric Garner, Michael Brown and Trayvon Martin. Pyer Moss's previous season was based on Ota Benga, a Congolese man held in captivity in the Bronx Zoo at the turn of the last century as a curiosity. Which is all to say, Jean-Raymond is perhaps the most confrontational designer working in New York at the moment. But a designer, especially a young one, knows polemic can only bring a bring a label so far. So what about the clothes?

To be clear, when we spoke to Jean-Raymond earlier this month, it was before Alton Sterling and Philando Castile died at the hands of police and the shootings of officers in Dallas and Baton Rouge. So lack of addressing these tragedies, an issue for many in the fashion industry who court the dollars and favor of black customers and celebrities but conveniently keep mum when events like these play out, is simply a matter of timing (check his twitter: @kerbito). What we had come today to discuss was the admittedly not too original story of a young designer keeping a business afloat in New York, albeit one who is compellingly committed to addressing, in words un-minced, real shit.

Jean-Raymond speaks quickly and rarely waits for an answer. It comes of as almost electric and distinctly New York, in the way breathing the cadence of the city from birth injects a staccato force to native speakers. His story starts in East Flatbush, the son of Haitian immigrants, his father a Taxi driver and electronics repair man and his mother -- Vania Moss Pierre, for whom the label is named after -- a multitasking hair dresser, seamstress and home health aid who passed when he was 7. "I remember my mom and my dad when I was six years old and I knew they worked so much and they would struggle coming up with six or seven hundred dollars for the rent. I knew that I had to work harder than everyone else. To do better for myself," he says explaining his work ethic, which is by all measures nothing short of protean. For high school, he attended The High School of Fashion Industries which is where he learned everything about construction, putting together a collection, and the all-important sketching. "I am so surprised when I hear some designers don't sketch. Like, why would you admit that..?" he says, proud of the craft instilled in him at the school on 24th, adjacent to FIT. After graduating Salutatorian, he began classes early at the neighboring legendary fashion college, where he was briefly schoolmates with Hood By Air's Shayne Oliver, and one of the designers early models. His memories of Fashion Industries center on two pivotal teachers, Miss Singleton and Miss James, the latter who would force him into her costume design classes and give him detentions to purposely keep him out of trouble.

After a brief stint out of fashion at Hofstra University (where he graduated Suma Cum Laude) and a detour into law --"For me to go to law school was an attempt to escape the industry and come back more valuable" -- he found his way back into the fold working for his fashion mentor Kay Unger, and then, of all places, as one of the first employees at Marchesa. "I would sketch for them and go get fabrics. I saw it grow from their first buyers appt. with Neiman Marcus. Everything. That was the most profound experience I've had in the industry," he says about the soup to nuts experience at the womenswear and bridal label. With Pyer Moss he has built it on nearly that exact model: a small group of dedicated young fashion lovers who work in his studio, the greener the better, building everything from scratch and exactly to his liking. "I've never hired anyone on my team who has had experience, so everything they learn is from me. They have my work ethic. When you try to get people in with 40 years experience, they're over it, jaded and the ability to learn is very limited. I was really valuable to Kay Unger because I was educable."

As much as he relies on the passion of the young fashion lovers in his studio and the energy of the city , he has begun producing outside of New York. "I tried to make everything in New York because it was like noble , but it was an abusive relationship. So expensive. I was working with a lot of local guys and I still will for bespoke stuff for celebrities and NBA players, but the margin that I get with that stuff allows for it. It really came down to sourcing the fabrics, we were barely making the margin," he explains. So like in any abusive relationship, you have to break up, producing in Europe for the last couple of seasons.

Outside of his RTW collections, his projects with celebrities, particularly styling Usher, keep him on the road and ironically more creatively fed. "Think about it: there's no Michael Jackson, no more Prince, Stevie wonder is not in his prime, Maxwell is on hiatus, who do we have who's the male equivalent to Beyonce? If you can't make a halloween costume from your favorite artist they can never be a superstar." His approach is to be honest with the artists he works with when crafting an image. Recounting a moment of recent candor with Usher: "With him I said, I think you dress too poor."

After a few years building his own brand -- he founded it in 2013 -- his eye has changed from the, at this point, ubiquitous athletic and streetwear mashup, to something a little more mature and, for lack of a better word, sophisticated: "Now Im a little older and I've traveled and have access to more things. I watch how my friends are evolving and they are not necessarily wearing sweat pants with jogger bottoms, to a lot of guys thats over. Stores are like we want jogger bottoms and I'm like "Fuck you!" If I had it my way I would radically change the shit every season. Right now my collection for spring 2017 is silk robes. My shit changes."

The collections for the past few seasons are departing, if slowly, from his sportif roots. Fall 2016, with anti-depressant warning label text on shirting and sweats, felt like an agitation against the streetwear bubble that he is beginning to rebel against but still working in it, biding his time before he makes a hair pin turn, which way may expect to see in September during the New York collections. Jean-Raymond has also, unlike many of his contemporaries, made the case for the relevance of the IRL fashion show. With his statement-making runway last season and his presentation the season before with live graffiti by Gregory Siff and looks listing the names of those lost to police brutality, he is waving the flag for the oft derided you-had-to-be-there fashion show. "I believe that fashion shows are very important and I still do believe that people in our industry have power and influence and we determine whats cool around the world. Everyone speaks through us: musicians, actors, athletes, and they express themselves through our art and we actually have more of a voice than we let on."

We're not sure exactly what he has planned for his Spring 2017 show, and he very well may not either (he has a tendency to change the show concept last minute), but if you're looking for some IRL Pyer Moss, the fall collection is now carried at SSENSE, Harvey Nichols and 4 Concept Store.

Before running off to put the finishing touches on pieces for his Spring 2017 collection, which he will sell during mens market in Paris, I ask him how he works and what its like to work with him. He thinks a minute and then looks up: "Ferocious. We are all ferocious, because we have to do everything."