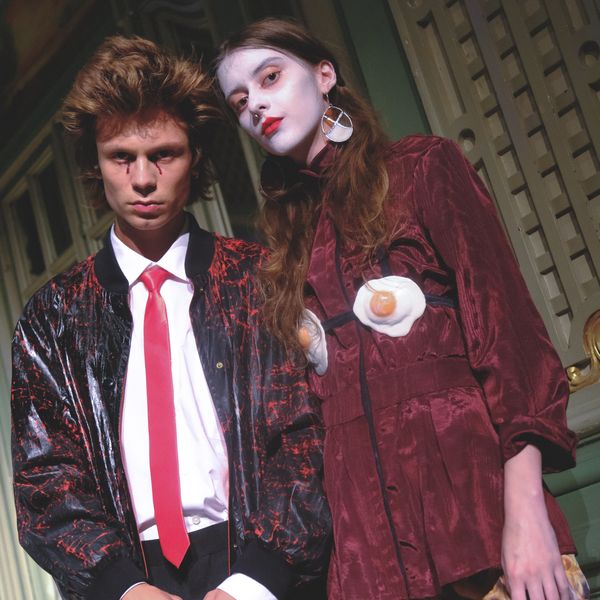 'American Psycho' Meets the Romanovs at Puppets and Puppets

At the Puppets and Puppets Spring 2020 show on Sunday, everyone was talking about the eggs. They were everywhere. They dotted the toes of fur-trimmed mules and were held stoically in a model's hand. They were fried into a bikini top. Egg carton sculptures served as the base of platform shoes (like walking on eggshells, lol) and smaller cartons dangled off the tips of sequin-trimmed kitten heels. Dresses with dramatic bustles took on egg shapes, and eggs dangled off of earrings. Later that night, post-Pyer Moss, I burned an omelette.

The collection was themed as "American Psycho meets the Romanovs," and so the eggs were a pointed allusion to the imperial kind. "We were looking at a lot of Fabergé eggs," said designer Carly Mark, who also has a fine art practice. "And I'm also a big fan of Marcel Broodthaers sculptures, and wanted to incorporate that reference." Broodthaers loved working with eggshells; one of his works, 1966's "Four Eggs," hangs at the MoMA, four eggshells with their tops elegantly removed. Very Top Chef.

Mark founded Puppets and Puppets with designer Ayla Argentina just last year, and their work has evolved into something both polished and weird, something in short supply in New York these days. The themes were clear — models walked in inventive clothing that evoked both '80s slickness and the grandeur of the Tsars (and a lot of the makeup, white face paint and powder, harkened back to Romanov hemophilia), all rich brocade and distorted suiting. It's a clever idea for a show in 2019, when income inequality runs rampant and eating the rich is back in style. Even the venue was on theme — the show was held in Manhattan's sumptuous Prince George Ballroom, which was built at the tail end of America's Gilded Age and was used in the 1980s to house homeless families, which were rapidly increasing in numbers as the excesses of the Reagan era raged on.

In the ballroom, models — artists and other downtown types like Alexandra Marzella, Richie Shazam, Michael Bailey-Gates, and Mission Chinese owner Danny Bowien — walked very slowly, like the way you might head to the guillotine. Musician Dorit Chrysler played an otherworldly theremin (Mark said she "always loved the space sounds they make"), and the audience was silent, enthralled enough to mostly ignore their phones. Mark, who also models, walked the show herself, in a tailored brown suit.

"I've sort of sworn off walking in shows, but it was last minute and I was forced," she said with a laugh. "I was like, 'If I'm gonna walk in a show, it should be one where I get to choose the outfit and do the whole thing myself.'"

The light inside the ballroom was tough to work with, so models gathered backstage afterwards for photographs. As they all posed together, one launched into the splits. "Work!" cried a PA. So said Patrick Bateman.