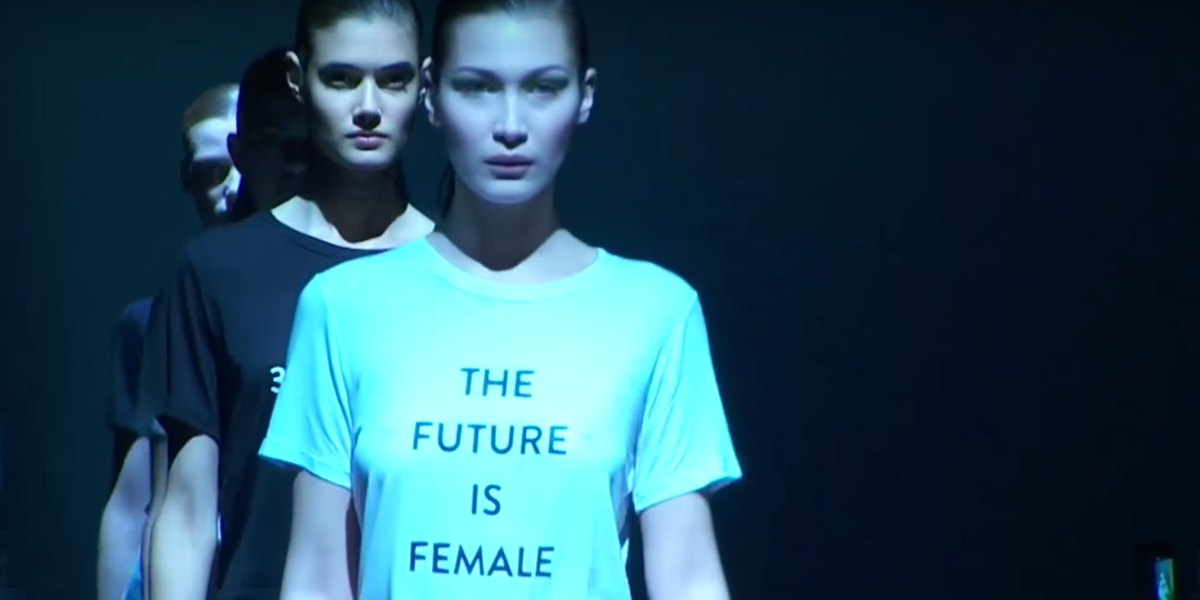 Last night, New York designer Prabal Gurung concluded his Fall/Winter 2017 fashion show with what was supposed to be a strong feminist statement. After sending 37 typically stunning looks down the runway on a well-casted diverse set of models for the main portion of the show, Prabal then sent his models back onto the runway for a grand finale—except this time, they all sported slogan t-shirts. Some of the highlights included "Voices For Choices," "Our Minds, Our Bodies, Our Power," "Revolution Has No Borders," and "I Am An Immigrant."

Unfortunately, one of the t-shirts was a carbon copy of another t-shirt from four decades ago. It was the first look in the lineup and featured the words "The Future Is Female" in black lettering. To the untrained eye, this statement might have been accepted as a bold declaration for this strange political climate. But for some others, it seemed reductive.

"The Future is Female" shirt at Prabal. 🤔

Love him but pretty sure the original was made by @Otherwild. #creditwherecreditisdue
— Monica de Castro (@monixdecastro) February 13, 2017

Made for New York's first women's bookstore, Labyris Books, the original shirt first caught on in 1975 when lesbian photographer Liza Cowan photographed her girlfriend Alix Dobkin wearing it for a slide show called "What the Well Dressed Dyke Will Wear." Now, 42 years later, the same slogan shirt is being sold by Otherwild, with a guaranteed 25% of the profits going straight to Planned Parenthood. (You may recall that Cara Delevingne came under fire when she tried to sell a sweatshirt featuring the exact same slogan in 2015.)

At this point, neither the designer nor Otherwild has addressed the controversy. We have reached out to Otherwild for comment and will update when we hear back.

Update: Otherwild's Rachel Berks has offered her statement on the controversy. "While there are no copyright protections or holdings for the slogan 'The Future is Female', there are protections for designers based on various complicated laws and precedents in which one must prove, among other things, a 20% change from another design." Berks then continues, "Prabal Gurung appropriated the newly-popularized design for his runway show [and] did not contact or credit Otherwild to share/discuss the FIF-inspired t-shirt for his current runway show." After mentioning that Otherwild donates 25% of each sale to Planned Parenthood, Berks told Paper Mag, "I'm not personally aware of any charitable contributions connected to his use of the t-shirt, nor his thoughts on feminism or related political, ethical, or artistic beliefs."