Sixteen-year-old indie-pop phenom Billie Eilish might just make the official case for homeschooling. Growing up in LA, she and her older brother Finneas built her skyrocketing music career together from their bedrooms in their parents' house, using their lessons to focus on music and performing. Her debut single "Ocean Eyes," has gone on to stream over 87 million times on Spotify and later this year she'll open for Florence and the Machine. Between tours, the two have been chipping away at her debut full-length album, scheduled for release sometime next year. The sound will be much like the dreamy, buttery indie pop her growing fanbase has come to love but with more energy and hip-hop influence injected. "We're making music that's going to be crazy to do live," Eilish says. "We're going to go hard. But we're also making shit to cry to. Everything."

PAPER: How has touring been? You're opening for Florence and the Machine?

Billie Eilish: Oh yeah! I'm doing a couple of dates with her. Yes, touring is ughhhh. It is what it is, dude.

I do not hear that as a ringing endorsement.

Yeah, well a lot of touring is fucking disgusting and I hate it but I really like doing shows so I can…do it. You know what I mean? It's rewarding to be able to do those kinds of shows and have that kind of experience. I wouldn't be able to if I didn't go through all the shit. I'm just learning. I've only been on two tours basically. I think a big key is having people you like with you and I don't know if I'm there yet. I had a friend come on tour with me for a week and that was the best ever, so I feel like I need that more. You kind of get crazy otherwise.

Yeah, to bring a piece of home. The idea of touring sounds mania-inducing.

What are the parts of it that are positive for you? In other interviews I've heard you really talk about having such a relationship with your fans. What's the experience like with your fans as you tour?

I mean, that's really the reason I do it. It's the only reason I do it — to be able to share those experiences with those kind of people. And just be with them. Dude, they — Ugh. I love them. They're incredible people. I just feel like I want to be as involved as I possibly can be and, safely, because it can be a lot. Even through the internet I just try to talk to a couple of them. I reach out because they're going through shit. I want to talk to them and kind of form them and help create who they want to be. You know? With shows I get to be with them and they can touch me and I can touch their hands. I'm really there and they're really there and it can be a whole experience. I don't want people to come to my show and watch a show — I want them to be at a show and be with the show and be in the show with me. I want it to be an experience. Part of you somehow. 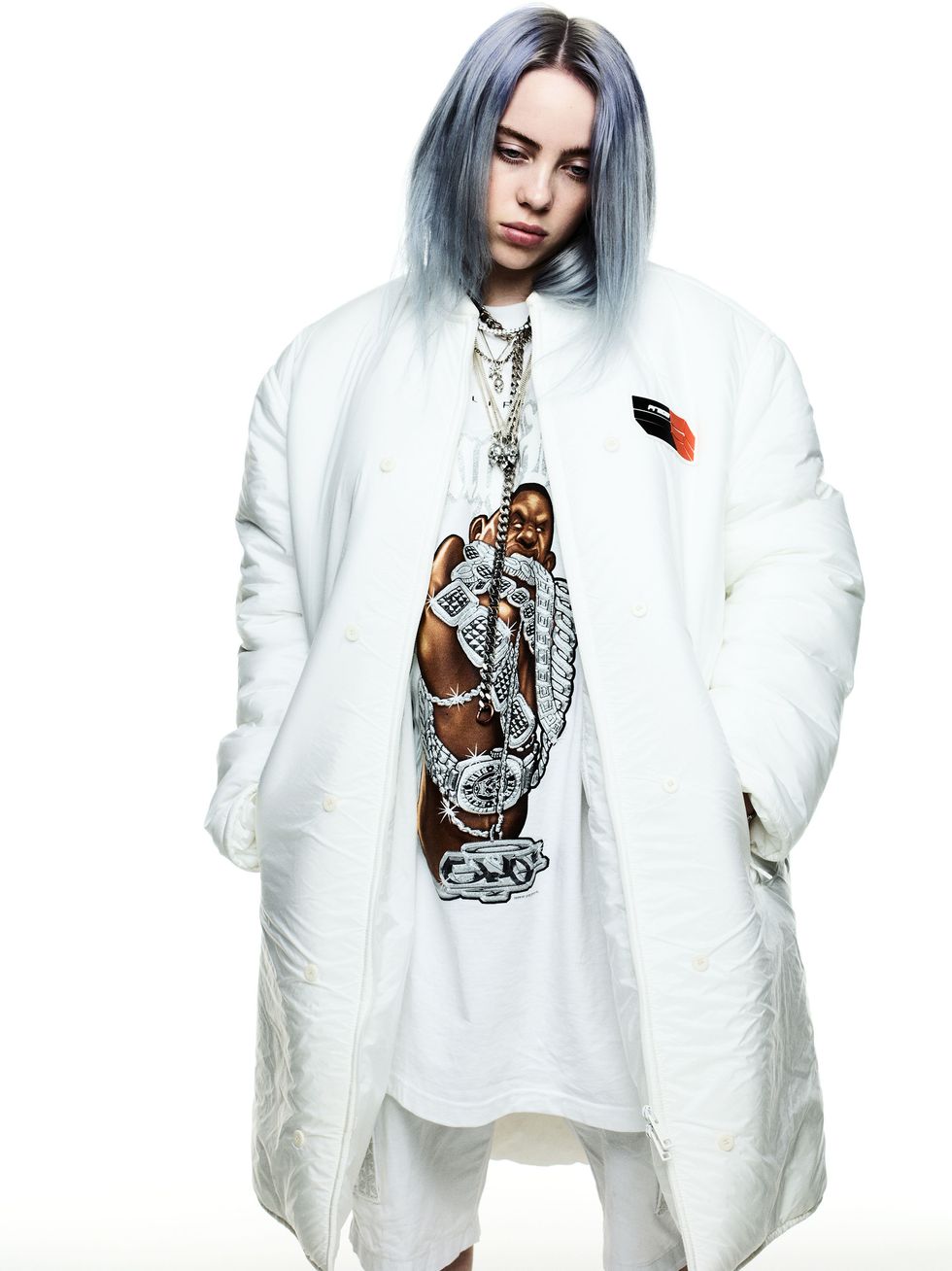 Shirt Give Me Face Shop

You were talking in another interview about the fact that you know what it feels like to be super obsessed/excited about someone — wanting to be connected.

Yeah exactly. Everybody is a fan of somebody.

Were there artists growing up that you felt connected to?

God no. No — literally it's the reason that I do it. I just want to be everything that people weren't when I wanted things. Cause, ya know, I grew up as a fan. I am a fan. All I wanted was to be able to share at least some sort of moment or look or glance or glimpse of the people I cared about and there was never any opportunities to do anything at all. I never met anyone I wanted to. I never met any of my idols ever until now basically and it's completely different. I basically am teaching myself to be what I didn't get. I just want to give them exactly what they want and completely take my feelings or self out of the picture. I just want to be there for them. It's not about me. It's for them.

I saw two different headlines that called you "a terrifying prodigy." And then you had a quote that was like, "People are terrified of me and I want them to be." What did you mean by that?

[Laughing] I mean, I don't even know how to answer that shit. I don't know. People are fucking spooked. People cross the street when I walk by. It's always sort of been like that. I'm not going to tell you people have been terrified of me my whole life. That's not true. When you know me, I'm not, like, going to kill you. There are no "I'm going to kill you" vibes with me. It's just a first impression sort of. I feel like everybody thinks that I'm going to fuck them up or ruin their lives. It's always been like that though. I swear. I really think it's the way that I look. I just have a resting bitch face so I feel like people are just like, "Oh, okay, she's going to kill me." That's all good. I don't know, bro!

Tell me about your relationship with your brother — you collaborate and create so much together. How do you balance being brother and sister and collaborators? How has that changed as you've grown as artists?

I mean, there isn't really a difference between our working relationship and our [sibling] relationship. And I want it to be that way. I feel like there was a little time where we tried to make it like, "Ok, this is our working relationship and this is our relationship." And it just ruined everything. I'm going to be honest, making the [Don't Smile At Me] EP was the most miserable either of us have ever been. It was horrible. It was draining and we were completely mentally unhealthy and whatever. Everything was off. We just did everything wrong. We went about everything the wrong way. The thing is that making this album that we're making right now has just been, like, jokes. It's just been fun. We've been trying to make it as fun as we want it to be and just not give a fuck dawg. Just do it when we want to do it and then it's done. I don't know.

I mean, it's been a lot of learning. We're just trying to get away from trying to make everything more than it is. It's so not. It's just — it's whatever you want it to be. Like I'm going to die one day. Why the fuck does it matter what I do now? Whooo cares? If I don't like it, what's the point? If I don't like it than what the hell is the point of me doing it?

So tell me about this upcoming album. Where is it at? When's it coming?

Um, I mean, it'll be done when it's done. But I'm cool with that. I want it to hopefully come out the beginning of next year or hopefully after, but if it's not ready, then it won't come out. I'm not going to rush it. Here's a better answer for that question: touring has taught me and my brother a lot about thinking things like, what is fun to perform? What is fun to jump around the stage to? What do audiences like the most? What is the best? What is the craziest? I'm really influenced by a lot of rap and especially hip-hop shows and it's just a lot of fun. You just go crazy and you're never bored. If you're jumping around, you're not bored.

That's where I come from so that's what I want. But I think there are some songs that you make and it's pretty and you do it live and you're like, "Wow, this is so boring. Everyone here is bored." Even if it's a song you love! That's what I'm saying. Even if it's a song you love, Dude, shit is fucking boring dawg. I don't want to be just into nerd shit. I want to be jumping around and jumping on people and like breaking people's arms and stuff. So basically, for this album we're making music that's going to be crazy to do live. We're just going to go hard. But we're also making shit to cry to. Everything.

Do you think fans who really know your music so far will feel like the album is a big change or just an evolution?

It's not even a big change. It's just different. It's still me. I'm not trying to be something I'm not. I'm just trying to be more of what I like. God it's so fucking annoying. People are always like, "Yeah she's changing for fame." And I'm like, "No bro. I'm just changing. I'm fucking 16, my guy." Dude the difference between me at 16 and me at 14 is a whole different person and that would be that way no matter what the fuck I was doing with my life. My music tastes are going to change no matter what. My style's going to will change. I'm going to change. Everything around me is going to change. Doesn't matter about fame or whatever. "She's changing for fame. The fame is getting to her." Bro shut the fuck up. Obviously I'm changing. Because we all do, so get off my dick.

Fashion is a big part of your expression, along with dance and physical expression. You've described your fashion as "wonky" in an interview and have talked a lot about wanting to start a clothing line. What would it be like? Are there other multi hyphenate artists you look to?

Are you going to start a clothing line?

Do you get also just be a teenager too?

Nope! Nope. Not even a little.

Billie Eilish Really Has 'No Time to Die'