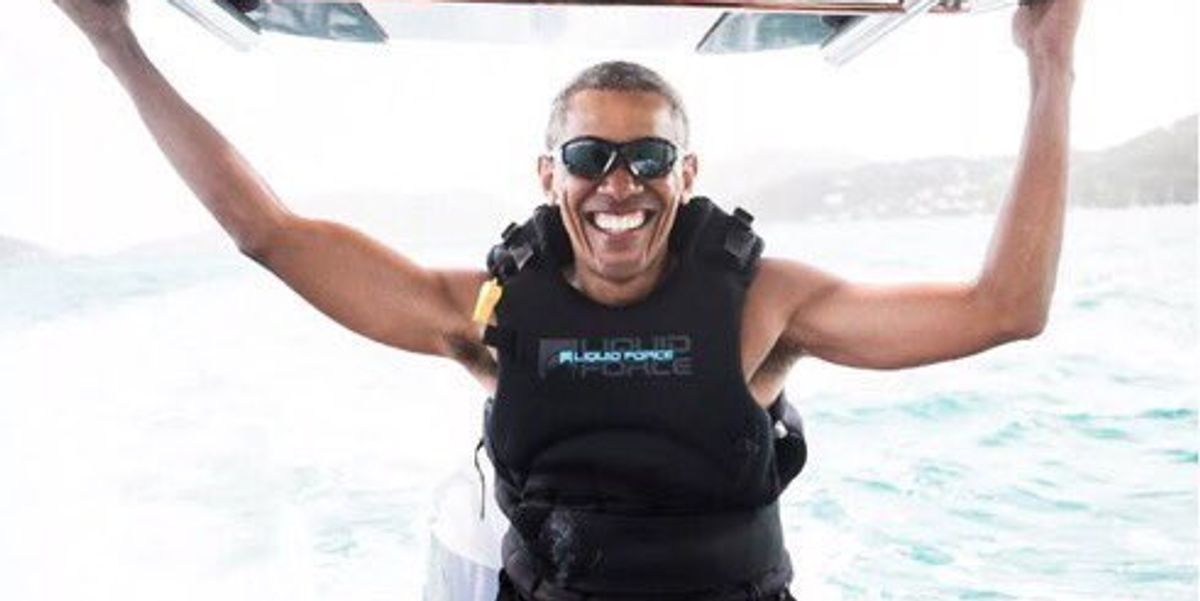 In the least surprising news ever, Obama is on vacation far away from the burning mess formerly recognized as the United States of America. And, also unsurprising, is the fact that he looks to be thriving.

We knew he was having a great time after a video of him rocking a backwards baseball cap emerged last week. But, the extent of his post-presidency glow wasn't apparent until friend and Virgin founder Richard Branson made a blog post about Obama learning to kitesurf on Branson's private island in the British Virgin Islands.

In a BFF post that rivals those endearing Biden-Obama memes, Branson edited together footage of him and Obama's competition to see if Obama could learn to kite-surf before he could learn to foil board. A process that was documented in a post Branson wrote earlier today:

"One of the first stories Barack told me when he and Michelle arrived on Moskito Island was how, just before he became President, he had been surfing on a dangerous break in Hawaii. When he came in from an exhilarating session, the new head of his security team turned to him and said: "This will be the last time you surf for eight years." For the next eight years he didn't have the chance to surf, enjoy watersports or do many of the things he loved. So it was tremendous to offer him the chance to learn to kite surf."

For 8 years, America doubted Obama's citizenship status, blocked his policies, denied him the ability to surf and eventually tried to make itself great again, and now Obama is getting the last laugh. As such, his vacation pictures have become a breakup meme. As one Twitter user writes, "Obama just posed for the "I'm GREAT!" pic you'd petty post after a breakup."

Obama has broken the tradition of previous former presidents who usually don't get involved in politics after leaving office. After only 10 days of Trump's presidency, Obama issued a statement that said, "American values are at stake" and that supported protests in light of Trump's Muslim ban. Still, it's good to see our former POTUS taking some much-deserved time off and living his best life. May we all some day glow like post-presidency Barack.