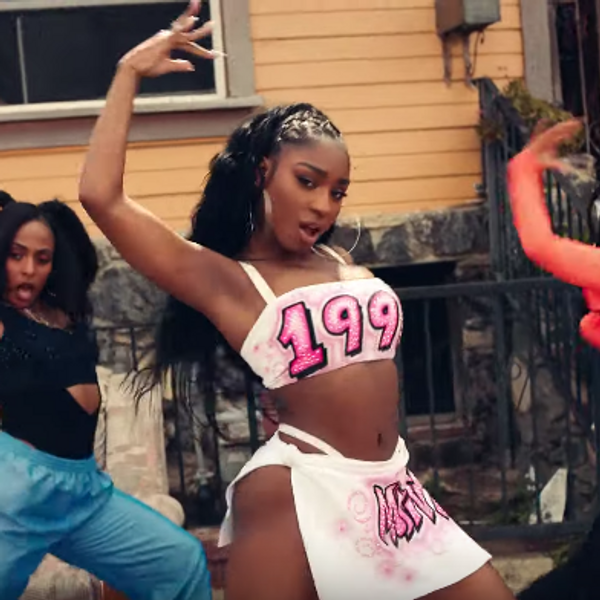 Why Everyone Is Referencing the Early Aughts

Nostalgia is the name of the game.

On August 16, Normani released the highly anticipated video for "Motivation," her horn-heavy, high energy single from her debut project. In the video, Normani flexes her background in gymnastics, dance, and even a bit of sorcery — I mean come on, who else could pirouette, bounce a basketball off of their knee, pop it, and then bounce the same ball off of their hip? The clip was something out of an early 2000's dream, an obvious ode to Beyoncé, Ciara, Christina Milian and other divas who rocked belly button piercings and participated in synchronized dance breakdowns in the street. [Much as it caused a commotion, trending all day on Twitter and dissected in endless group chats, or something like that], "Motivation" is a part of a larger cultural trend of adoration for the style and sensibility of late 90s and early 2000s fashion.

In 2008, the late Harvard professor, artist and writer Svetlana Boym broke down the word "nostalgia" in her book, The Future of Nostalgia. "The word nostalgia comes from two Greek roots, yet it did not originate in ancient Greece," she wrote."Nostalgia is only pseudo-Greek... The term was coined by... Johannes Hofer in his medical dissertation in 1688. He believed that it was possible 'from the force of the sound Nostalgia, to define the sad mood originating from the desire for [the] return to one's native land.'" Solange based her most recent album, When I Get Home, around this concept, albeit the tone was much more hopeful than sad. Fellow Texan Normani discussed her love of the past in her 2018 interview with The FADER. "I am going back to the music that I grew up with that really inspires me. I get to pull from that and incorporate those sounds into this project." she said. It's only right that she replicate the fashion from that time period as well.

So, what exactly qualifies as 90s/early 2000s fashion, and who are the major inspirations behind this revamp? Well, think low-rise jeans with your thong showing, like Manny Santos in the 2003 season 3, episode 3 episode of Degrassi, or Janet Jackson in her 1997 cover story shoot with Vibe Magazine. Airbrushed apparel was a big part of that era as well, with celebrities like Missy Elliott, Kate Moss, and Tyra Banks stepping out in their custom outfits. Modern folks like SZA, Amandla Stenberg and Drake have contributed to this revival and in 2016, designer Alexander Wang gave airbrushed shirts to all of the models who walked in his Spring 2017 show.

Missy Elliott at the 2001 VMAs (Photo via Getty)

The accessories of the early 2000's counted, too. You couldn't be seen without a pair of large hoop earrings, an ankle bracelet, a mood ring, and a bandana that had been decked out with only the best rhinestones. Actually, any article of clothing with rhinestones would do. A cherry lollipop that the owner never seemed to finish eating enhanced the look as well. To top it all off, you needed some $1 lip gloss from the nearest beauty supply store.

There are critiques of this trend. People argue that artists and fashionistas need to find other sources of inspiration, since the 2000s were such an objectively bleak time for fashion. It's true that like in any era, there were unforgivable trends (cough, flip flops with kitten heels, cough) that feel like fever dreams. But everyone knows that fashion goes in cycles, so it was only a matter of time before platform sandals and Baby Phat came back around. There are young people who weren't old enough to enjoy long, thick cornrows, pleated, baby pink miniskirts and Juicy Couture's velour tracksuits when they were in style, so now is their time to bask in the magic. Let them enjoy this without the harsh criticisms of the fashion police. May the styles of Teairra Marí, 3LW, Britney Spears, and Beyoncé live on!