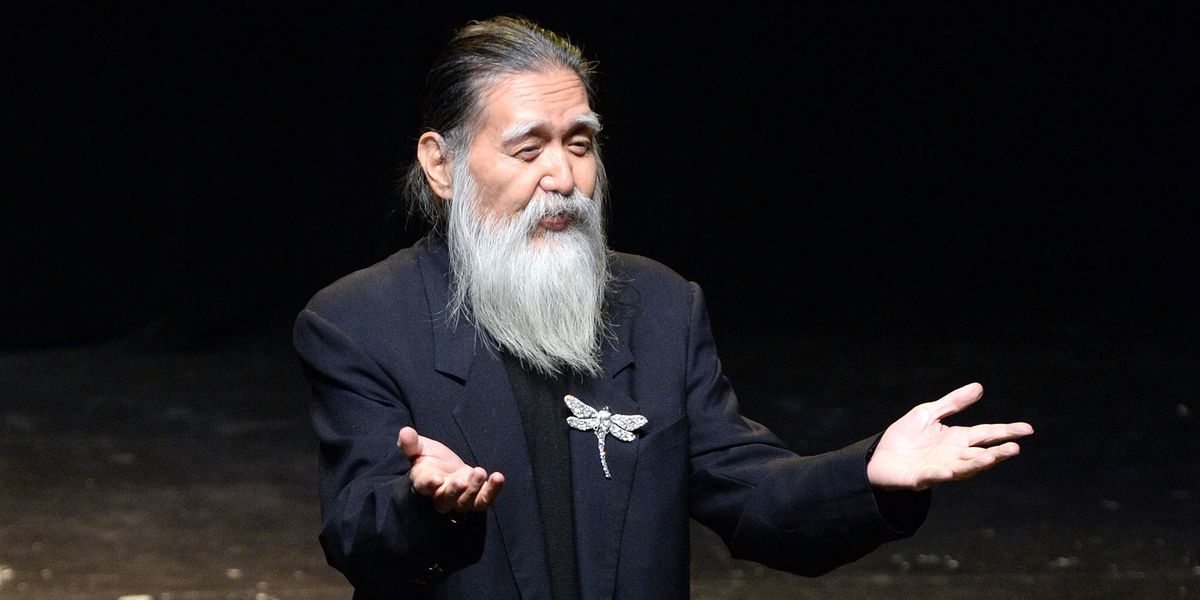 A longtime performer in avant garde theater, Agosto Machado is a vital part of the fabric of NYC culture. The "part Chinese, Spanish, and a few drops of Filipino" New Yorker was an actor at the East Village performance haven La MaMa (among many other credits), and he continues to glitter, while sharing his wisdoms with the newbies. I talked to Agosto about his creative explorations from the 1960s through today.

Hello, Agosto. How did you get into the arts?

I'm a pre-Stonewall street queen that coincided with all the things that were happening in the '60s, with the anti-war, gay rights, and black power movements--all the movements that street queens talked about and fell into. It never occurred to me when I saw the work of [avant garde director] John Vaccaro—and I had somehow met Jack Smith and Mario Montez--but it never occurred that with all these talented people I was blessed to see that I would cross the footlights. It was only in the encouragement of [Warhol drag Superstar] Jackie Curtis, who brought me across the footlights for Vain Victory, which we did in four incarnations. I was blessed and lucky and had no real plans of doing anything. I lucked out with the wonderful people at La MaMa. I call it my home and family.

So La MaMa creator Ellen Stewart must have been major to you.

She was my honorary mother after Jackie. I met her in 1961. My friends took me to what they said was a theater on Ninth Street. It was a dirty basement. I thought, "How can this be a theater?" But they said, "This is the best." It was so intimate. It's where I ended up going to see theater. You're right there.

What is your specialty onstage?

I will admit at this late stage of my life that I still can't sing, dance or act. People have been so generous to include me in productions. Tabboo! [the drag persona of artist Stephen Tashjian] included me in an extravaganza at Howl Gallery last October with wonderful younger people. I thought, "Gee, whiz, I'm an ancient dinosaur who's able to meet and mix and play with these emerging talents." All these people are guardian angels. I wonder what they see in me with all this generosity. [Late drag performance artist] Ethyl Eichelberger kept insisting I could do all this stuff. It amazed me because I never thought I should be sharing the stage with this goddess, yet she included me in so much of the work. The Pyramid Club was a big treat. John Kelly was the first performer at the Pyramid. I always say that opportunity didn't knock on my door, Jackie Curtis did.

I just wandered down the rabbit hole with no plan. Like in a pinball machine, I bounced from all these legends, like [playwright/actor] Jeff Weiss. How did it happen? There is a divine plan, but I can't figure it out. I'm so pleased to look to the LGBT community. The torch is waving higher and longer and stronger with all the strong women that have moved to the forefront. I feel this is the century of the woman and she moves forward.

How old are you, darling?

[joking] I'm 39, but I've just got to turn 40 pretty soon. I'm an ancient dinosaur, but at least I'm still alive and talk to younger people and try to impart how the city was before. Real estate has changed every city in America. I have really no talent.

But maybe that IS your talent.

To dress up and say a few lines and what have you, I don't know how this happened. It's really Alice in Wonderland. Suddenly, I'm onstage in costume with these great people--isn't that a miracle?

I think you're so good because you have no affect--you just present—and that's refreshing.

I think I reflect with all the people around me, and the audience thinks I can do something.

You shouldn't put yourself down. I love the monologue you did about Judy Garland's funeral in the Tabboo! show.

Taboo! said, "What are you gonna say?" I didn't have time to rehearse and we had a limited time at the gallery. Suddenly we're there. Whatever comes out of my mouth comes out of my mouth. It's frustrating to know I should have, could have, might have. I never want to see myself or listen because I have a queeny voice that I can't stand. People must think, "Oh, God, this is old queen is creaking around the stage and she's obviously bewildered." If you've seen the videos, I still don't know how to do makeup. RuPaul's Drag Race has elevated it to high art—not only do you have to be a Picasso of the face, you have to have wit and personality and think on your feet. I think, "Where does it all come from? And they're so young."

How did you make a living back in the day? Surely not from doing La MaMa.

I did such a variety of things. I walked dogs, I fed cats, clean cats. My body has let me know when I did too much. I can't do windows--I can't reach that high! I used to deliver telegrams, and that is an adventure, getting on the subway and going to all the different boroughs. Then I hooked up with a theater-related company, dropping off telegrams to Broadway stage doors. There was an opening of Chicago. I'm old enough to have seen Chita Rivera in West Side Story and thought she broke through. I was so glad I was able to see her [many years later] in The Visit. She did a thing for AIDS and she still could kick her leg above her head. She was a person of color who was able to do, through sheer talent and will, all these other roles.

Do you still perform a lot?

This February, the CultureHub at La MaMa did four 50-year-old plays that Robert Patrick did about the future in the '60s. It was reinterpreted with video, as multimedia. I realized that, after half a century, I never did a Robert Patrick play. It was just a treat. At the cusp of 80 years old, his dance card was filled morning, noon, and night with all the circle of friends who had survived. At the end of each performance, he would sing a cappella. I understand there will be a revival next season of his play Kennedy's Children. I'm from the last century. I don't do all these modern things and gadgets. I hate technology. I don't even have a toaster. But Robert is the keeper of the site for Caffe Cino ["the birthplace of off-off-Broadway"].

So many creative people have died or fallen through the cracks through the years. Do you ever feel survivor's guilt?

Yes, but I'm poly faith. I believe there's one creator with no gender, and I do believe that the universe, Mother Nature and all that…I'm alive to contribute and do things with positivity, but I'm not quite sure if I'm really doing it.

Why am I still alive unless I can contribute more or do more? One of my projects I want to do is I take snapshots, although Peter Hujar tried to encourage me to do photographs, and he was the master. I have a collection of snapshots. I want to make an album of all the pre-Stonewall people, acknowledging that they participated in the history of our community.

Was there anyone among those people who you didn't get along with?

I'm a Libra. I don't believe in putting toxic, non-positive energy out there. I can be civil and polite to everybody at this point in my life. Old people are invisible. The few survivors left, at least we can say, "Hi, you're still here." Michael, you are the bridge of the past, present and the future. You're interacting every evening with two or three events. How do you keep your sanity?

I've seen you on a bike. That's how you've kept your figure. And I saw you at the Box in a play with so much dialogue. I thought, "How does he remember all that?"

Well, you remembered all that Judy Garland stuff. What's your feeling on romance?

I believe in it. I have a rich and full fantasy life. For several years, I have been in love with Anderson Cooper and Neil Patrick Harris. I only have fantasies about people who are gay. I segregate them. I think Anderson is so attractive. I'd like to hear him talk dirty to me. [During sex], he could be saying all this wonderful collection of words. I'd have to pause and say [choking noise], "What does that mean?" And Neil Patrick Harris has such intelligence and humor. He could have me in stitches—not tied up, but in stitches, laughing--and he sings! But he's happily married and has two children. There's eye candy everywhere. I have no gaydar. I cannot tell.

Do you ever think about old Hollywood types, like Roddy McDowall?

I did go to the gay center a few years ago. Tab Hunter, who I always adored, was there for a book signing. I wasn't the only queen there two hours ahead of time. I rushed to the front row and the dais was a little higher, so I was looking up his face—he had perfect teeth. When I talked to him, I said, "[Actor] Keith McDermott can't be here tonight." He sandwiched his hands with mine and said, "Give him my best." Those two hands were all over Tony Perkins! Even today, if I could get down there with kneepads, I would worship Tab Hunter. He's very vital. He rides a horse! But I won't get on a horse. Don't rescue me, Tab. Can't we just stay earthbound?