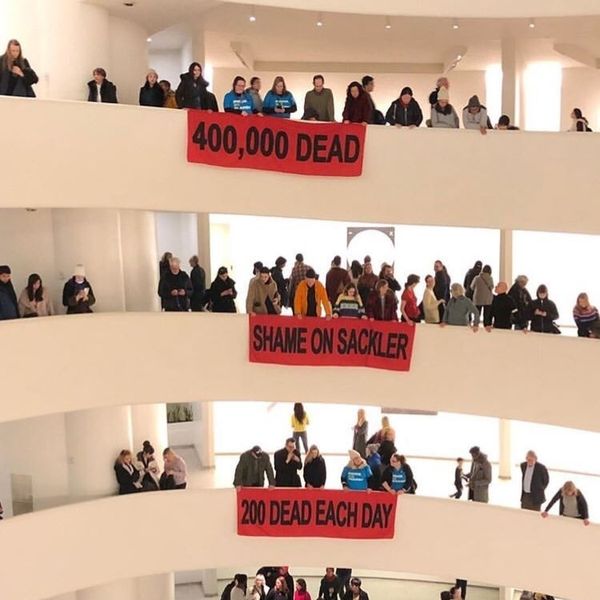 Nan Goldin Leads Protests at Guggenheim and the Met

On Saturday, celebrated artist and founder of P.A.I.N. (Prescription Addiction Intervention Now), Nan Goldin, lead a pair of demonstrations at the Metropolitan Museum of Art and The Guggenheim against the institutions continuing acceptance of donations from the Sackler Family.

The Sacklers pharmaceutical company, Purdue Pharma, is the largest producer of Oxycontin which is a drug that lies squarely at the center of the country's ongoing opioid crisis. Goldin, who published a photo essay about her own struggles with opioid addiction, published a petition demanding the family to be a part of the solution to the problem they created and help fund treatment and education programs for those affected by the epidemic. Goldin and P.A.I.N. have also since called on institutions like the Met and the Guggenheim to divest from the Sacklers' contributions in order to send a clear message that they will not be complicit in supporting a company that has been responsible for hundreds of thousands of deaths.

In a post inviting her followers to meet her on the step of the Met, Goldin took to Instagram to announce the protests last Friday. Protesters staged a die-in as other hung signs over the Guggenheim's balconies that read "Shame on Sackler" and "Take Down Their Name." Demonstrators also scattered fake prescriptions with quotes from Richard Sackler's recent deposition in a Massachusetts court like "We have to hammer on the abusers in every way possible. They are the culprit of the problem. They are reckless criminals."

Nan Goldin on Instagram: “Our action at Guggenheim yesterday!!”

Nan Goldin on Instagram: “Quote from Richard Sackler from court documents just released! Group made scripts with 4 different quotes and we sent as a blizzard from…”

Nan Goldin on Instagram: “And this. Richard Sackler was the Vice President Of Purdue pharmacy the family’s private pharmaceutical co which formulated and pushed…”

"We've been knocking on their doors for a year and not a single museum has denounced the Sacklers, taken down their name, or publicly refused their funding," Goldin said in a post. "Time's up."

The Met released a statement last month that explained that the museum's relationship with the Sacklers predates the opioid crisis but saying that they will be "engaging in further review of our detailed gift acceptance policies, and we will have more to report in due course."