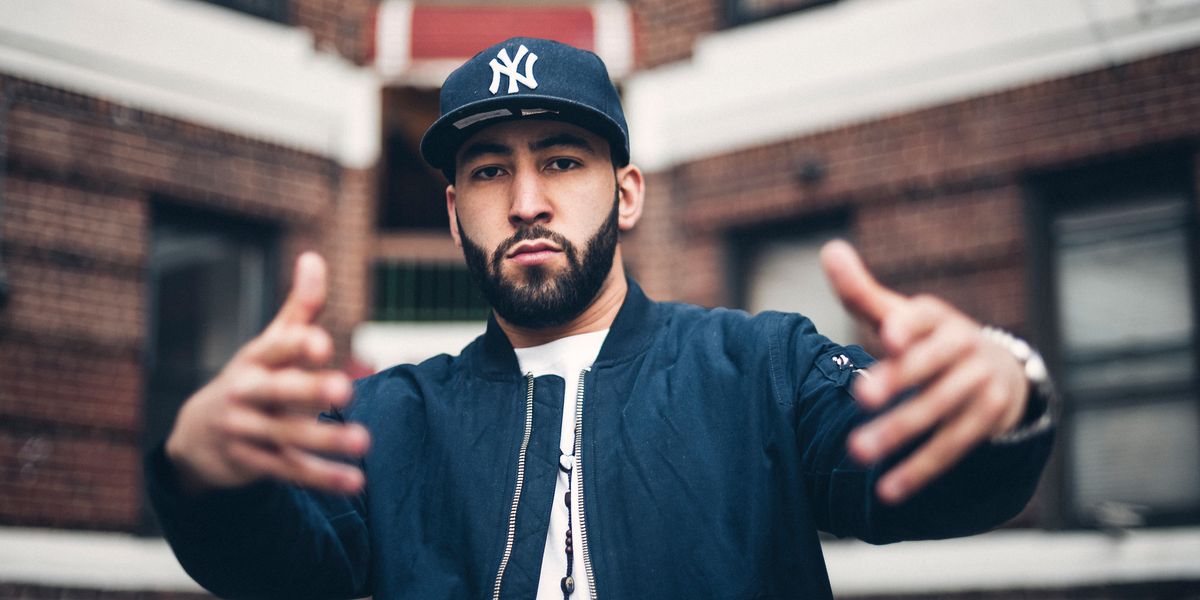 MRG Lives by the Golden Rule

By the time I show up to the Chinese restaurant above his Brooklyn recording studio, Matthew Raymond Guzmán (MRG) has nearly finished all his egg rolls. We're meeting to talk about his new music video for "The Way It Goes," premiering today on PAPER. The urbano party jam is the lead single from his debut LP, Live From the Hurst 2, and the latest release from indie label Westvilla Music.

Former NBA player and longtime friend, Daniel Ochefu, joins while we wait for MRG's producer Kevin Cruz (who also performs as DJ Mostwanted), to show up with the keys. Once the crew is fully assembled, we make our way downstairs. The vibe is casual and Guzmán's energy is optimistic — a shift from the more upbeat club scenes captured by the music video's director, A1 Vision, who, like Guzmán, is Dominican and from the same Queens neighborhood.

The video was filmed at the Jupiter House in Brooklyn's Red Hook neighborhood — a space specifically chosen for its festive Caribbean-themed decor. However, the venue's nostalgic essence hews closely to the song's message. "The Way It Goes" documents the waves of grief often accompanying a relationship that ran its course too soon. In the song, Guzmán raps: "Girl you one in a million/ Something like Aaliyah said/ Got me all in my feelings/ When you was leaving me on read/ Never understood why/ You started to curve me/ Never had time for me always in a hurry."

"The song was inspired by a woman I was dating." Guzmán explains. "We were intimate, but she'd just gotten out of a relationship, and wasn't looking for anything serious. When you've been with someone for so long, sometimes it can seem like the grass looks greener on the other side, and she definitely wanted to play the field. One of my favorite rap lines is from Nas. He famously said, 'I don't got game, they just understand my story,' which I always thought was dope because it showed me that you don't have to be a smooth talker."

An urgent feeling that love, opportunities and material wealth might slip through your fingers lest you seize the moment is also the driving force behind Live From the Hurst 2. Over an array of boom bap and Latin beats, Guzmán sings and raps while fusing English and Spanish, further highlighting his Dominican roots.

Tracks like "ROD" and "Yerrr" feature his lyrical prowess while Guzmán dissects the anguish of rejection and redemption. The album is also a meditation on the delicate balance that children of immigrants have to strike between doing their own thing and living in the shadow of their parents' sacrifices. In Guzmán's case, he was a baseball prodigy and scholar who initially struggled to make music his full-time passion out of a sense of duty. Now at 26, Guzmán's album demonstrates that his music is his destiny.

Tantamount to that complex journey is Guzmán's hope of finding true love, which involves squaring expectations of people with who they really are. With "The Way It Goes," Guzmán's take on a relationship gone sour hinges on a couple's struggle to connect while being confined to the same space — together, yet detached. In that dynamic, infidelity is a real possibility, and mistrust abounds. In its own way, the song mirrors the amplified uncertainty many are experiencing these days.

"I believe in the golden rule: Treat others how you wanna be treated," Guzmán says. "If you're gonna cheat on your girl, or if you're a girl and you're gonna cheat on your man, you gotta expect them to do the same thing and be okay with it. For that reason I don't cheat. If I wanted to cheat I'd just be single, and do my thing. Me and my girl are very clear on that. Our relationship works because we genuinely want to be together."

Given the shakiness of New York's response to COVID-19, and the ongoing cancellation of events, MRG's next show, initially scheduled for April 11, was postponed indefinitely. In the meantime, like everyone else, Guzmán is staying home and rocking a pair of Air Jordan Retro Lows, but itching to get back onstage. It's been a while.

In January, his father died after a two-year battle with bile duct cancer. His entire family came together to say goodbye to their patriarch, and the grief comes in waves. It's been Guzmán's greatest heartbreak, and being able to do music has been like therapy. Needless to say, performing live gives him life.

"It's an out of body experience. Like back when I played baseball I had several occasions when I was in the zone," he says. "Performing live there's definitely moments that were surreal, where I went into autopilot — where nerves turned into fuel. My only wish is that my father had lived long enough to see it."