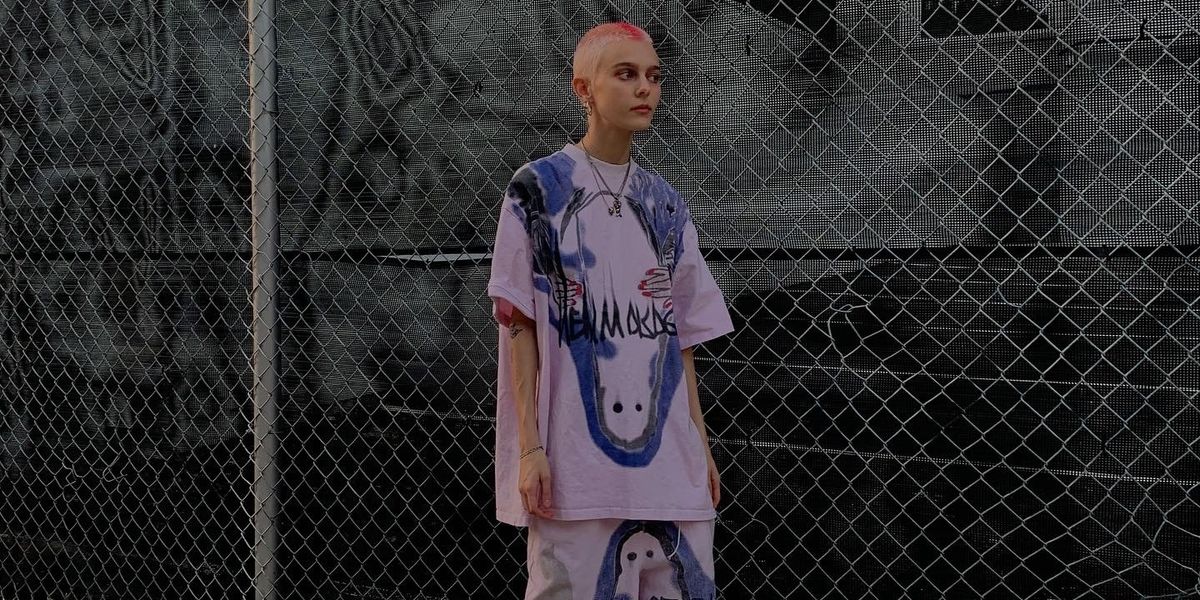 Morgan Saint Turns Into a Cartoon for 'Keep On Hanging On'

Aside from public speaking and spiders, being alone and facing loss rank among the top of our collective fears. When avoiding that fate relies on your ability to confront feelings you've been running away from, the challenge can feel insurmountable. Indie pop singer-songwriter Morgan Saint relates, and she's ready to share her story of introspective reconciliation on her latest single.

Fresh off the release of her EP HELP, the follow-up to 2018's Alien, Saint is premiering today the edgy, animated visualizer for "KEEP ON HANGING ON" exclusively on PAPER.

The track is one that Saint holds particularly close, as the narrative follows her journey of falling in love with a friend. The lyrics document the fear that comes with uncertainty in the potential for unrequited love. In the song's second verse, Saint sings, "I hate that this feels right/ And that's why I'm so afraid/ Don't wanna wait another life/ But that's just the bed that I made."

Those feelings come from a place of self-realization and growth, recognizing the need to reckon with past feelings while simultaneously glancing into the future of what a relationship could be — and desperately trying to run away from the answer.

While the lyrics document the emotional suppression and the "what-ifs," the real-life story flipped to a more positive chapter, creating the beginning of a love story of sorts between Saint and her best friend (as well as one within herself).

"This song is super special to me, because I wrote it about my best friend and now-girlfriend," Saint said. "We were both in different relationships and friends for about three years prior, but we always had such a special connection that really sort of tortured us both. I was in a relationship that had a lot of previous pain that I was tirelessly trying to repair and not give up on, yet I had these incredibly strong feelings for this other person at the same time that I just couldn't run away from as much as I tried. I used every bit of my energy for so long to suppress these feelings, to the point where I was in such denial that I didn't even allow myself to admit them internally. There finally came a point where all of these emotions just sort of came to a head, and this was the first song that I wrote."

If the track is about confronting the romantic emotions that Saint was holding back, the video is a display of that growth. The animated visual, which features a beautifully drawn, pink-haired Saint, looks almost dystopian; the deserted landscape feels representative of a healing mind — one plagued with uncertainty while seeking true honesty from within.

Saint recognizes that she was caught in the crosshairs of her own internal battle — an "inner revolution" — but the reconciliation gave way to self-discovery. The repression of Saint's feelings for her friend was only one piece of the puzzle, and the visualizer intends to center on the bigger picture of that journey.

"I studied illustration in college, and did a lot of animation — so I was very excited to work with my team to create a fun, animated version of myself for this video," Saint said. "The eruption of the feelings that I had been actively repressing for my best friend triggered the floodgates inside of me wide open and all of the sudden, I found myself confronting so many other things about myself that I had also been suffocating. When I was conceptualizing this video, I really wanted it to be a reflection of this sort of inner revolution that I've been experiencing for the past year or so. It represents me really confronting and rejecting a lot of the walls that I had built around myself to make other people happy and comfortable."

Watch Saint's "KEEP ON HANGING ON" visualizer, follow her on Instagram, and listen to the rest of the HELP EP, below.