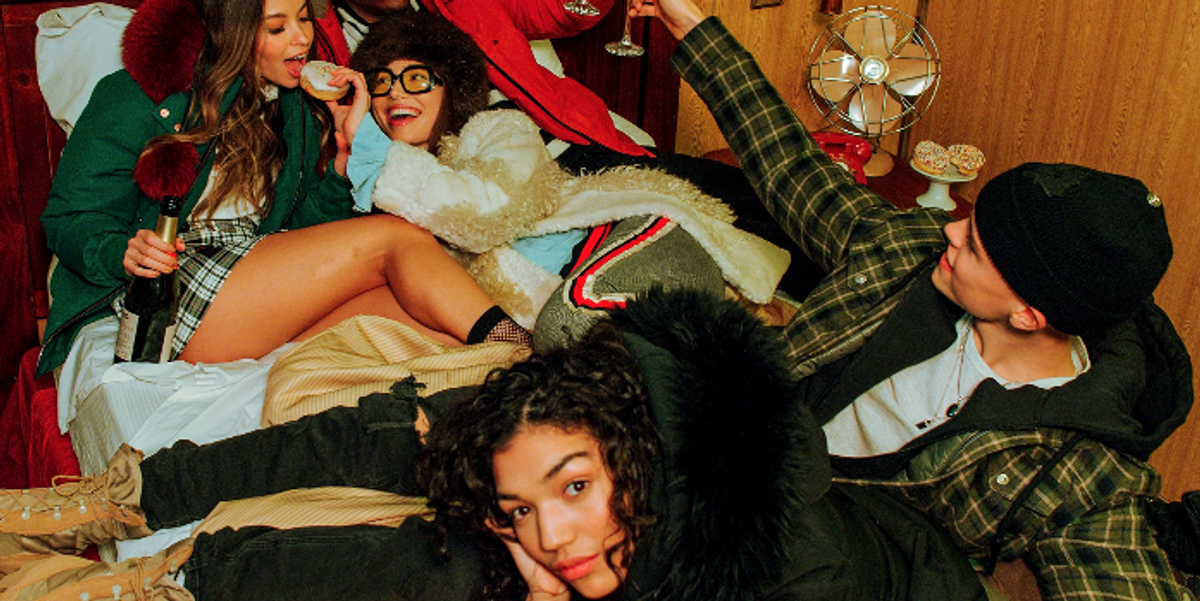 Get Freaky With Moose Knuckles, the Canadian Brand Heating Up Outerwear

Now, Moose Knuckles is back with their FW18/19 campaign, and it's one for the ages. In a visual created by inimitable film collective, Kid Studio, five privileged teens are forced to spend the night at a dingy roadside motel on their way to a ski trip and, as you might guess, titillating horror — and gratuitous nudity — ensues (spoiler alert: strippers make out douzed in blood). The brand united the best of Toronto to showcase the new collection, with images shot by photographer-of-the-minute, Othello Grey, and stylist Bobby Bowen, who are both committed to raising the city's profile as a fashion epicenter. Read our chat with Moose Knuckles' creative director Steph Hoff, the woman intent on making fashion fun, and check out the full campaign below.

Moose Knuckles has developed this reputation for creating styles that are totally unlike any other outerwear product available, was that was your approach when heading up the brand?

I thought, who cares, it's just clothes. It's just outerwear. It's also just so ridiculous to make it so precious. Especially in the time we live in with the Internet and Instagram. Everything is so fleeting. Let's just have fun and live in the moment.


How do you design something to be fun and fleeting but ensure it's timeless enough to hold up in 20 years? Or compete with a household name like Canada Goose?

Well, Moose is an exceptionally well-made product and our styles are pretty timeless too. The same styles we launched with in 2009 when the brand started, are still our best-selling styles today. I don't think you could buy a Moose Knuckles core coat without hopefully buying a fashion piece and some accessories. At the root of it our products are not for the super-rich, they're for people from all walks of life. We're very inclusive, we're very approachable. I feel like the parka is now the statement shoe or the statement bag. If you have that parka, you look super jiggy, and you can just wear it like a pair of Zara jeans, or you can wear vintage. It's because you have a bomb $900 super flossy parka on and that's the look. That's all you need. But as a Canadian I love Canada Goose. It's like the Levis of outerwear.

Was there no trepidation in moving into a lane that a brand has already put their stamp on so definitively and saying, hey, it's us now?


As much as Canada Goose is this amazing technical outerwear, expedition, explorer brand, and I absolutely love it for that, you want to stand in line for a club with our coats on, you want to show up to a party with it on. Wearing the knuckles on your sleeves means something. It's like you're a part of a community of misfits and counterculture. It's people who are coloring outside the lines. That is really the community that we're building. Our products might endure the test of time but our marketing certainly doesn't have to. It's for the internet generation. It's fleeting. It's right now.

Is that what attracted you to the role?

Yes. That freedom. It's not me to just go into a suit and tie to sit in a shareholder meeting. We're privately owned so we can kind of do whatever the fuck we want.

It's amazing that someone trusts your vision like that too.


It is incredible. If I wasn't doing this I'd probably be making music videos or just contemporary art. I don't know if I would even be in fashion. Wherever I could be weird.

What if it blows up to the point it's mainstream, no longer subculture-cool?

I guess we'll cross that bridge when we get to it. It's a good problem to have. Like I said I live for right now. The amazing thing that people don't understand is that we've always been cool for like ever and no one knew. The way that we nurture our creative community only exists here, in Toronto.

When did you notice the city was morphing into this culture capital? When did you other notice people noticing?

I have to give props to Champagne Papi. Drake opened the door for everybody. He is the mayor of Toronto because he puts on for us so much and all of the love he gives us he gets back tenfold. This is how we're making a $200,000 globally impactful commercial for Moose Knuckles with dudes who were up for four MTV Music Video Awards and people are shooting ad campaigns for massive other commercial retailers. This would have never happened before. In 2002 if you would have told me this was going to happen, I would have never believed you. We really are America's little brother, but now we're America's cooler little brother.

Right, and you all did it together. That will be Toronto's creative legacy.

For sure. We need to stick together. There were never any opportunities in the fashion industry. Growing up and watching fashion television, you used to watch it, see these runway shows and think I have no access to that. I have no idea how to get there. Moose Knuckles is now sold in 25 countries worldwide, in the best retailers in the entire world and we give young creatives the platform to showcase their work — we use this brand as a platform. I think that's what is really important to me is to provide opportunities to young Canadians on a global scale and use this brand to do it.

And the Internet means you can do that, the fashion gatekeepers are gone.

Right, and people might not like the name or say the marketing is aggressive. They'll say it's kind of tasteless or it's too young. We But the market demands it. That's how I feel too about the fashion industry, as Canadians, we were always knocking on the door saying let us in. But because there's the Internet we don't need you anymore. It's like Anna Wintour doesn't matter anymore. Do you know what I mean? Anna Wintour is teaming up with VICE to become relevant.

It's like, this campaign is very much inspired by Steven Klein who is a legend and great in fashion photography, but why can't Othello Grey be next? I don't want to throw shade on Steven Klein's name because he's the inspiration, but we're not working with those photographers, we're working with the new and young emerging creative talent that everyone is watching on Instagram going what are these people up to. I want to see who's next and it's like that's the exciting thing that because of the internet are these opportunities to self-publish digitally. We can get our work out there and we don't need acceptance from the original gatekeepers anymore. Same with Canada, we don't need you anymore, we don't need the rest of the world to go Canada's cool because the market demands it. Everyone already likes it. Drake was on Degrassi, Justin Bieber got his start on YouTube, it's like Canada is a country where we're the new world.

And you just named two artists were picked up by other artists, not A&Rs.

The buyers don't like us, but when the market is coming in telling these buyers because they saw us on Instagram or they saw us on anther artist, they're seeing these people shout us out on Instagram and wearing us in the streets, and they want the brand. Then the buyers are retroactively coming back to us going I guess we're at your mercy. We're talking to the end consumer. We're not talking or pandering to the buyers.

And that's so fucking Canadian.