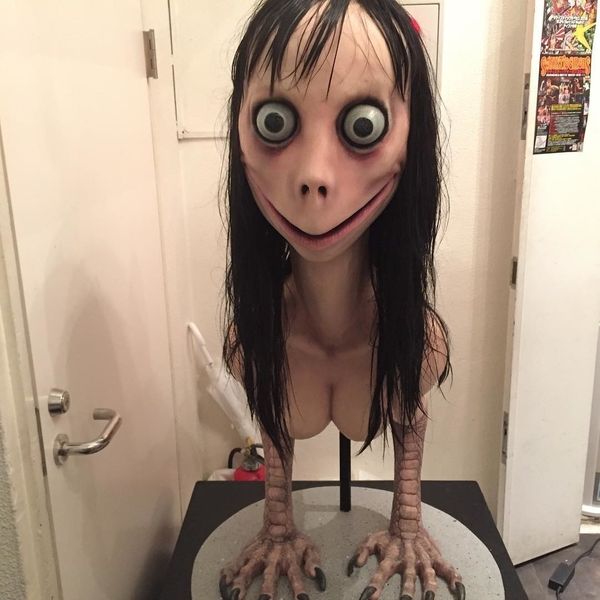 The Artist Behind Momo Has Destroyed His Cursed Creation

When God created Man, he looked in horror at what he had done, repented, and cast Adam and Eve from the Garden of Eden. When Frankenstein made his monster, he too realized his mistake and tried, too late, to undo the error. Now Keisuke Aiso, the Japanese artist behind Momo, has decided to destroy his accidental abomination as well. Momo is no more, The Sun reports. Concerned parents, rejoice!

With her strands of greasy black hair, sunken eyes, and twisted mouth — not to mention surprisingly buxom breasts and chicken feet — Momo has terrified various sections of the Internet since 2016. Most recently, she became the unwitting participant in a viral "suicide challenge" hoax, which supposedly encouraged young children to self harm via innocuous-seeming YouTube clips.

The supposed existence of these Momo videos has caused mass panic in recent weeks, but YouTube itself has confirmed that the suicide challenge is fake; no actual examples of it exist on the platform. Which didn't stop Kim Kardashian falling for it.

Either way, Momo was too freaky to live. Aiso told The Sun that his two-year-old sculpture had started to decompose, so he ultimately decided to throw her away last fall. He hinted that Momo had become even scarier over time: "If you'd have seen it in the state it was in, it would have probably looked even more terrifying."

Aiso has followed Momo's viral journey with bemusement. "I created this artwork three years ago and at the time when it was exhibited at the gallery it did not receive much attention, so at the time I was very disappointed," he explained. "So when Momo first appeared, it was good in a way that it had received some attention." But he had "mixed feelings" about the whole suicide challenge thing, saying he did feel "a little responsible."

He was confident, though, that we can all move on with our lives now: "The children can be reassured Momo is dead — she doesn't exist and the curse is gone."

RIP, Momo. I personally hope people continue to Facetune her.