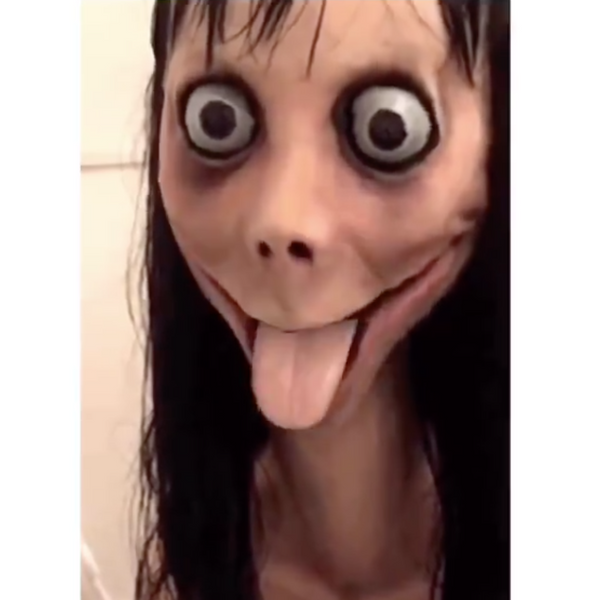 Momo Tells Her Side of the Story in Exclusive Interview

A buxom, saucer-eyed, lipless bird lady with trendy bangs and Voldemort nostrils named Momo has been haunting the Internet, of late. Here at PAPER, her terrifying yet enchanting visage has been pretty much all we can think or talk about. We were among the first to vouch for her innocence during last week's moral panic, based on false rumors about a YouTube "suicide challenge" administered via WhatsApp by her likeness.

To reiterate, the challenge is not real: the only thing proliferating online are rumors. No suicides or even YouTube content has been credibly traced traced to the "challenge." Parents like Kim Kardashian, who fell for the hoax and posted a panicked PSA on her Instagram story, can rest easy knowing that there are many, many terrifying things their children might encounter on the internet, but Momo is not one of them.

Due to her outcast status and undeniable physical allure, Momo has become a counterculture hero in the style of the Babadook or Pennywise. Fans have started a new Momo makeover challenge (rude, because she is gorgeous and perfect, though there is debate about this on our staff) and a remarkable portfolio of memes and fan art has accumulated over the last several days (a warning: on social media, you'll have to wade through content tagged to Japanese pop star of the same name).

PAPER was even in talks about a digital cover. But before we could share Momo's story with the world, many of us were devastated and others relieved to learn she no longer exists. Before our girl went viral, Momo was a doll-statue titled "Mother Bird" created by special effects puppeteer and sculptor Keisuke Aiso. Aiso told The Sun that before, he actually destroyed Momo last year, offering this disturbing image: "It was rotten and I threw it away." Aiso also said he feels responsible in part, for the challenge. He addressed the world: "The children can be reassured Momo is dead — she doesn't exist and the curse is gone."

Although her gorgeous physical being is no longer with us, thanks to voice actor and YouTuber Vincent Marcus, we've finally gotten to hear Momo's side of the story. Using advanced deepfake technology, Marcus digitally resurrected Momo in order to conduct the first and only known interview with the bird-doll.

It turns out, Momo, full name Monique, is just your average aspiring influencer. And like Jordyn Woods, she is taking control of the narrative. After she introduces us to her YouTube channel, we learn that Momo actually loves kids and has four of her own. "I wouldn't hurt a fly," she tells Marcus. She suspects the suicide challenge rumor was, in fact, leaked by her ex Marcus. But she isn't holding a grudge and ultimately feels the Momo Challenge will help her career. "But as they say, all press is good press, so now that you're here, make sure to follow my Instagram, Twitters and YouTube" she asks.

As the Momo hysteria rages on — according to The Sun authorities in the Philippines actually organized a burning of a Momo effigy to help children overcome their fear of her — parents need only to show their children this (warning: PG-13) charming interview to prove that Momo is nothing to fear. She's just a modern girl "trying to live her best life."