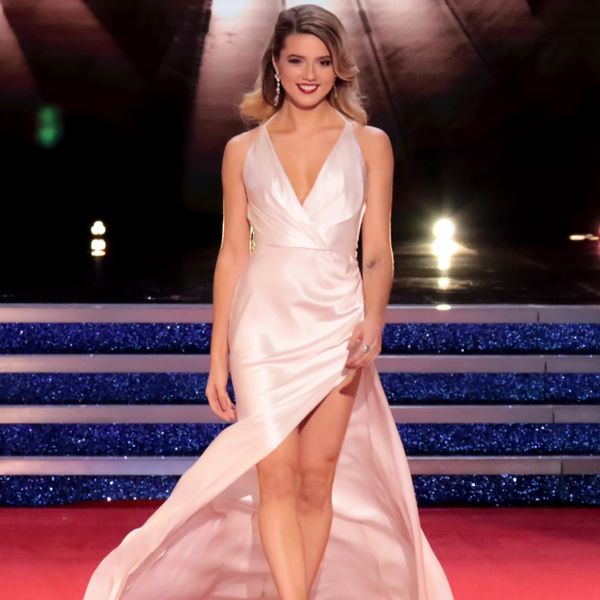 The Miss America pageant is like a tacky shrine where we store dumb American traditions. Once a year, families and friends gather round the sparkly pagan altar to watch men rate women's bodies and charisma. But even Miss America is trying to keep it relevant (and attract viewers under the age of 50 in the #MeToo era). This summer, the organization finally scrapped the swimsuit competition and added a second interview section, has become a pleasantly surprising opportunity for participants to make strong political statements.

At Sunday night's pageant, when Miss Michigan, Emily Sioma, stepped on stage to introduce herself, she said, without hesitation: "I'm from the state with 84 percent of the U.S.'s fresh water, but none for its residents to drink."

The 24-year-old University of Michigan graduate and women's studies major took the pageant's 5 million plus viewers as an opportunity to bring attention to her home state's mismanagement of the still-unresolved crisis of Flint's water pollution. In the latest reports on the issue, lead service lines are slowly being replaced but bureaucratic conflicts between the city and state governments are slowing the process.

Maybe the pageant's efforts to transition from being a misogynistic spectacle to an platform to empowering women are making a dent after all. At very least, Sioma has proved that the pageant has an audience that is here for more than just platitudes about world peace. Although Miss New York ultimately took home the crown, Sioma's comments have gone viral since last night and #MissAmerica2019 viewers are obsessed.

Been rolling my eyes all weekend that Miss America is still a thing but MISS MICHIGAN FOR PRESIDENT https://t.co/Y6Wib6DVRg
— Jane Burns (@Jane Burns)1536544752.0

So Emily Sioma, Miss Michigan is a sexual assault survivor/activist who takes her moment on stage at… https://t.co/IDDQvB6Vyt
— CRT (@CRT)1536544260.0

Miss Michigan, Emily Sioma, told me she would rather have a swimsuit competition because she said cutting it wouldn… https://t.co/nVbqgGlGHb
— Amy Kuperinsky (@Amy Kuperinsky)1536541823.0

Miss Michigan using her 10 second intro to speak on flints water crisis instead of herself is truly using her platf… https://t.co/4IAFkpKFP8
— Jesse (@Jesse)1536541730.0