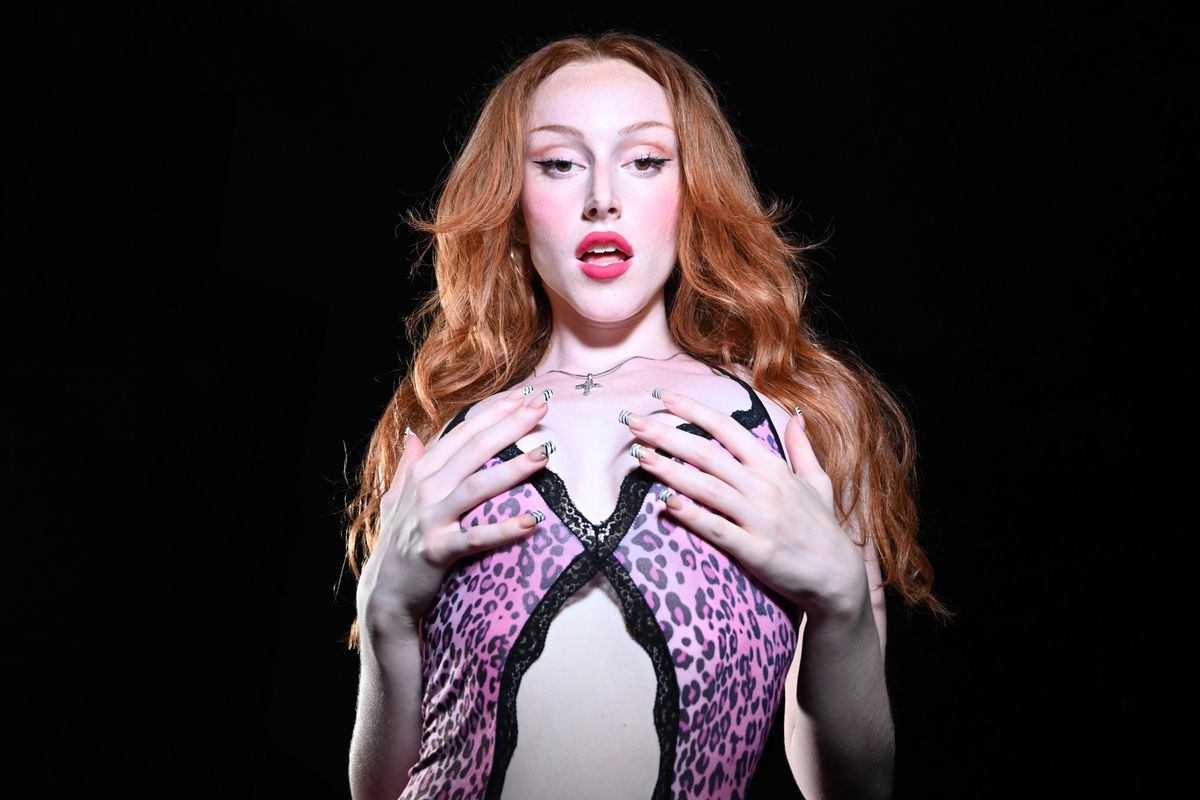 New York-based performance artist Miss Madeline knows exactly where she wants to be: at the top.

"I want to be the biggest pop star ever," she says boldly over-the-phone, reviving a nostalgic period of Britney Spears-level pop stardom. Paying homage to the "Pop Princess" archetype, Miss Madeline is proving she has what it takes to become the world's next bright star, and she's certainly not stopping for anything.

Last month, Miss Madeline dropped the clubby, self-indulgent track, "Attention," which flaunts a healthy level of self-obsession above dance production. Now, she's enlisted RuPaul's Drag Race Season 11 winner Yvie Oddly for an amped-up remix of the track — and in these times, it might be the closest thing to actually going to the club.

PAPER spoke with Miss Madeline about her rise in music, her obsession with pop stardom and how she's working to take her career to the next level.

How have you been keeping yourself busy during the pandemic?

I've been working out a lot, I guess, but not really. I was so bummed for the first half of quarantine. I love to go out, and I just miss the club and all that shit. I think this track is fun and it allows you to bring a little club vibe home with you. So I've been having fun with that, just trying to have a little party by myself.

When things fully open back up again, what's the first thing you want to do?

What was it like creating that remix with Yvie Oddly?

I was honestly so surprised that she was down because she's amazing and we just really sent it to her out of nowhere. And she was like, "Oh my God, I love your track like, yeah." She sent the vocals right away and we started poking around with them. I think we created something pretty cool, so I'm really excited about it. I love Yvie Oddly. I'm just kind of like, "Woah."

Lyrically, what's the story behind "Attention"?

It's about self-indulgence — having that moment for yourself. It's about playing up your flirty character and sometimes even putting on a whole different character for the club. Like if you want to be someone else for the night, do it. I think everyone wants attention in some way, so I'd rather just be honest about it. And I think it's pretty obvious with me, but the song is just about being your flirty, sexiest self and being honest about it — being upfront with that.

"I want to be the biggest pop star ever."

How would you describe Miss Madeline in comparison to your born identity?

So who are you, really?

I'm Maddie. My friends call me Maddie. But I mean, I still love to be fabulous. I wear makeup when no one's looking, I love taking Instagram pictures. I love putting looks together. I love getting my nails done. I love having a good time. I love hanging out with my friends. I'm always creating and thinking of the next thing. Like right now this is dropping, but I'm already trying to put the next music video together for the next single, you know. I'm really trying to keep myself busy and I have a session later today. I want to do this thing. I want to be the biggest pop star ever.

What does pop represent for you?

I think pop is escapism in many ways, but also it's real life shit. Like "I just want attention" is a fun thing to say and it's a character to play, but also it's real. I think all of us really do want attention. And now everything is pop music, you know, like hip-hop is pop, so many things can be pop. It's just like what's popular. I love all kinds of music, but I'm so in love with the nostalgic idea of the pop princess. And I think that's me.

Who are your musical inspirations?

How would you describe your songwriting process?

Usually I have a running list of notes and I'm just constantly putting little ideas on it, even if it's just one little phrase here and there. And then when I have a session, I'll pull notes up, look through it and create a song around one of those concepts. And then I'll bring in either a beat I have in mind or some reference tracks.

Do you play instruments, too?

I grew up playing piano and guitar, and I used to write songs like that. I've been writing songs since I was like 12 or 13, but more recently, I just go into the studio and we build a beat because so much of my music is electronic. I mean, there's still chords in there. Maybe I'll whip out the guitar one day.

How do you think that your sound has evolved since starting?

My sound is constantly evolving. When I started out on the guitar, I was doing a rock-bluesy thing and I would play at The Bitter End and I had this little band. And then I went to Clive Davis at NYU and I learned a lot there, kind of honing in on my artistry. Being an artist is about so much more than just being a good musician or a great songwriter. I learned a lot about branding and selling yourself as a product, and bringing my love of fashion and looks and being the crazy girl that I am and bringing that into my music. It took me a long time to realize I could do that, like be my genuine self in my music, and some people don't take me seriously because of it. But whatever, you're no fun.

Having gone through that entire journey, what's one thing you would tell your younger self now?

I would say, "Keep writing songs all the time, because it's such good practice." Obviously the songs I wrote back then are so different from the songs I write now, but the practice of songwriting is so useful. I would tell my younger self, "It's okay to be yourself." And I think a lot of people have this weird taboo around pop music, like, "Oh, it's not real. People don't like to take you seriously." I'm around a lot of music bros that really have that energy and I'm fucking fed up with it. So I might as well do what I want to do and throw it in their face.

"Shove what you want to be down their throats."

How are you so confident?

People have asked me this before. Honestly, if you just look in the mirror every day and you're like, "I'm that bitch, I'm sexy, I'm hot." Even if you don't believe it, saying it over and over and over again, will make you start to believe it. And if you just present yourself that way, people will believe it. If you are like telling people, "Oh, I'm self conscious, this and that," then that's what they'll hear and that's what they'll believe. Shove what you want to be down their throats.

Aside from music, what else interests you?

Fashion, dance. I grew up a dancer, so I'm really excited to bring that into my artistry more. I would love to have choreography and dancers and that whole thing.

My aesthetic is very Y2K, which I think is kind of becoming basic now. So now I'm just trying to find the super cool pieces within Y2K, like I've been wearing a lot of Ed Hardy recently. I feel like not everyone is onto that yet. I was thinking maybe I should bring back Abercrombie. I just want to make shit that's kind of whack cool again.

What impact do you hope to have on the world?

I want to be the next big thing. I want to take over the world. I want to perform in arenas. I want to have dancers and all of that. I think Miss Madeline and a lot of my music and songs, my vision, my energy and everything offer a lot of people a path to live out their secret fantasies through me. I want to promote this idea of confidence and bring that to everyone I can and just have a good time. Be yourself, let's party.