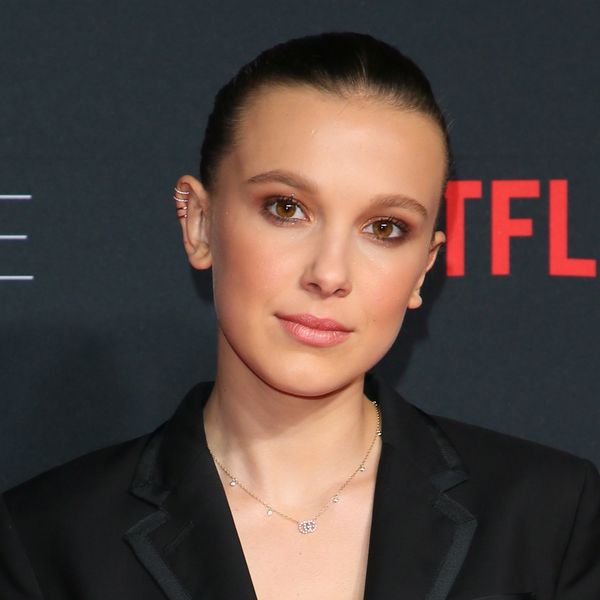 Stranger Things star Millie Bobby Brown ("Eleven") couldn't attend the MTV Movie & TV Awards because of a knee injury, but she still made a video appearance to accept her award for Best Performance in a show. In her speech, she addressed the recent flood of memes pinning her photo to extremely homophobic statements (the joke being that her image is so squeaky clean — given that she is, in fact, a child—that the combination becomes absurd).

"Since I know there are many young people watching this — and even for the adults, too — they could probably use the reminder that I was taught: if you don't have anything nice to say, just don't say it," Brown said in the broadcasted video. "There should be no space in this world for bullying, and I'm not going to tolerate it, and neither should any of you."

"If you need a reminder of how worthy you are and to rise above the hate, message me on Instagram," she added in the speech. While her IG account remains active, she's disabled comments because the trolls are relentless.

While Brown may simply be the unlucky victim of a nasty meme, she is far from alone in being harassed off of social media. Women deal with it all the time, and especially women of color. Add being in the public eye to that list, and you quickly become a target for a level of harassment that Twitter has yet to properly address.

Ghostbusters star and SNL cast member Leslie Jones was famously bullied off the platform, and actress Kelly Marie Tran (the first woman of color to play a leading role in the Star Wars franchise) also recently left social media because of racist and sexist trolls.

Brown's Stranger Things costar Noah Schnapp defended her on the red carpet prior to the awards show, telling Variety, "I feel really bad for her. I think it was a smart move by her [to leave Twitter]. People are just insensitive."