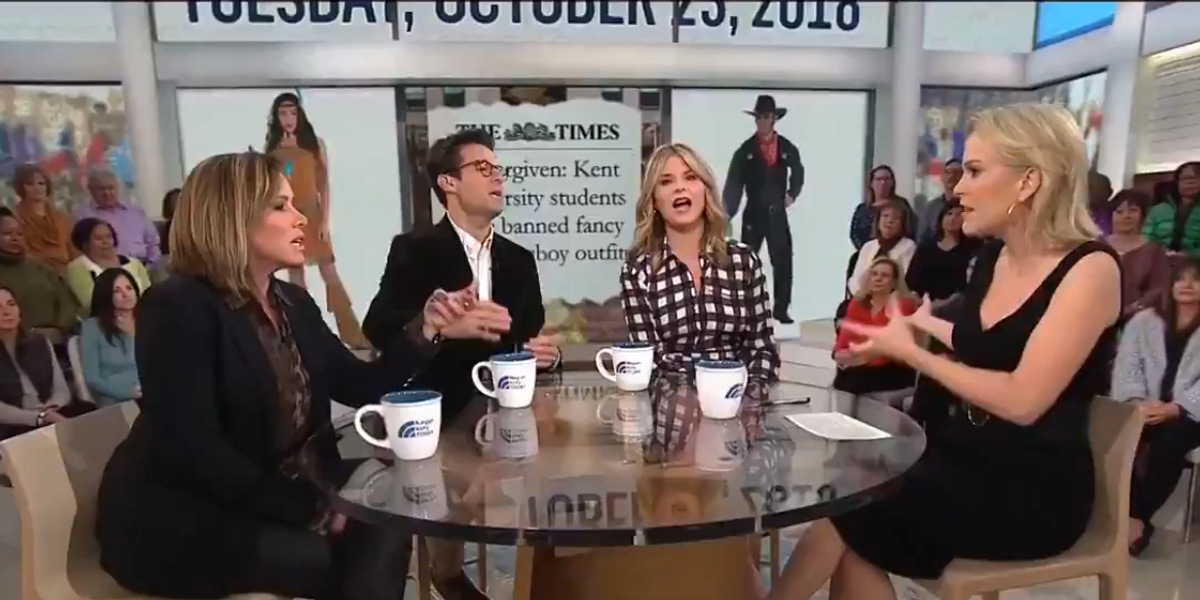 A story that's been making the rounds over the last 24 hours is that of Megyn Kelly, former FOX News host and current NBC morning-show household name through Megyn Kelly Today.

Kelly, on Tuesday's said morning show, in a four-person roundtable involving all white commentators, said that when she was growing up, dressing up in blackface for Halloween "was okay, as long as you were dressing up as like a character." (oh!) She went on give an anecdote (oh!!!) about someone she knew who wanted to dress up as Diana Ross one Halloween, but of course, the misguided white soul in question simply couldn't dream of committing to a The Boss-approved look without darkening her skin using makeup. Like, a jumpsuit and sky-high heels would've done just fine!

I cannot believe the ignorance on this in 2018. You are on national television. You have a responsibility to educat… https://t.co/FzZKLfKYb6
— Padma Lakshmi (@Padma Lakshmi)1540306148.0

"But what is racist?" Kelly implored of her all-white panel, looking genuinely confused. Blackface, that's what. As are the other things white people like to dress as for Halloween: Mexican mariachi bands, Nazis, colonial crusaders, Native Americans, Isis jihadists, and so many more. Do you read? Here's a primer on why blackface specifically is so terrible.

It would appear that no one was as confused as Kelly and those who think like her. But, like, shouldn't it be painfully obvious to all by now that blackness, either in likeness or personification, isn't a costume, a trend, or a flashy fashion accessory? In 2018, are white people still blithely unaware that one of the most harmful forms of white privilege involves simultaneously consuming and erasing Black identity, while also seeking to embody it? Especially in a society that routinely disenfranchises and systemically kills Black people?

Padma Lakshmi is one of many people of color who took Kelly to task, tweeting that Kelly's responsibility was to educate herself on social issues. And writer Amber Ruffin appeared on Late Night with Seth Meyers last night to say this: "It's not racist on Halloween, it's racist every day. There is no magical day where you can wear blackface with no repercussions! Unless all of your friends are white, and I'm guessing all of Megyn Kelly's friends are white."

I should cut Kelly some slack: when discussing historically painful topics concerning the Black community, it's very hard to see where you're wrong when you're only speaking about it with folks who look like you (aka who did the booking for this fireside chat?) But also, as Ruffin pointed out, Black panelists are not needed to explain blackface's hideous racist context. Because, again, this should be neon-sign obvious in this day and age.

What's slightly scarier than Kelly's ignorance is her apology, which admits that the history of blackface is indeed abhorrent, yes, but also sort of doubles down with a bit about not being "PC" — a term that conservative firebrands have distorted in recent years to highlight an alleged attack on precious free speech. Because, apparently, free speech gets thrown out the window from the top of the Sears Tower when you're trying oh-so-hard to avoid offending people with racism, which is the real stain on this country. Melissa Rivers at one point in the back-and-forth asked, "What ever happened to polite society?" Fair question that I wish we knew the answer to. People are so rude. But you know what's super rude and impolite?

Dressing in blackface, on Halloween, and any time before or after. It's impossible to do it correctly or respectfully. But must we have this conversation every year? Is it really that hard? Apparently, for many white people who have never suffered from racial persecution, it still is.