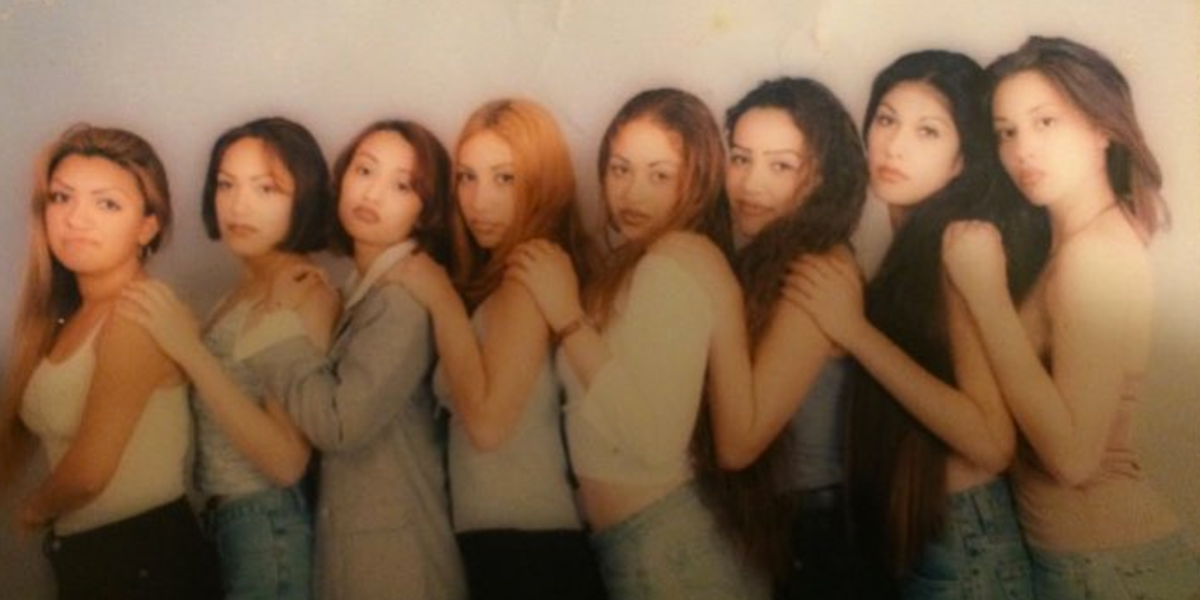 Artist Guadalupe Rosales started her popular Instagram account Veteranas and Rucas in 2015, out of a desire to reconnect with her Los Angeles roots and the west coast latinx community after many years spent living in New York. She began sharing personal photos of her friends in the rave scene that flourished on Los Angeles' east side in the '90s, mixed in with party flyers, scans from her Street Beat magazine collection, and an entire trove of other anecdotal snapshots, glamour shots, prom photos, boys flashing gang signs and pictures of friends hanging out in teenage bedrooms. A call for submissions resulted in an inundation of incredible crowdsourced images pulled from photo albums and shoeboxes across Southern California, that tease out the specific experiences of thousands of chicanx teens in their respective subcultures and scenes from the '70s-'90s, collaging together to paint a rich portrait of diversity and self-determined identity. Rosales moved back to Los Angeles in 2016, and her archive was officially recognized earlier this year when Rosales was named the first ever Instagram Artist in Residence by the Los Angeles County Museum of Art (LACMA).

The archive Rosales has lovingly compiled is an absolute treasure, and with over 131k followers, Veteranas and Rucas has become a full-time job. We got Rosales on the phone to talk about her youth culture archive and its rave-specific spinoff Map Pointz, along with memories of her own teenage experiences in the 1990s Los Angeles rave culture.

Can you tell me a bit about your background and how Veteranas and Rucas got started?

I was living in NY when I started Veteranas and Rucas back in 2015. I felt like I was neglecting a part of my history, or a part of myself. I moved to NY when I was 19 or 20 years old and I was feeling removed from my culture and I felt I needed to reconnect with the people on the west coast. I started doing some research online, and I didn't really know what to look for... mostly everything that I was finding was stereotypes, and I needed to find something more, find a deeper connection to those images, stories, and histories. Pretty much everything I was finding [online] was men, gangs, low riders, and that made me think – "Who is the person that grew up surrounded by all of that? The gangs, the raves, the cruising and all of that? And what would I call that?" So I guess in that process I also had to create a new language to describe my own experiences living in LA with all that stuff.

Then my friend encouraged me to start something online, like a blog or a Facebook page, and I decided to start an Instagram page because the focus was more on images rather than text. Since I didn't have all the materials I was looking for, I put up a call for submissions. I wasn't very specific. I said, "Send me DMs of anything pre-selfies and earlier." It grew so quickly in a couple of weeks, then LA Weekly interviewed me and it just took off.

What made you create a separate account for raver culture?

Map Pointz started a year after I started Veteranas and Rucas. For me it was very important to create a separate space for Veteranas and Rucas because that account is a little loose. It's about that latina or person of color that experienced a lot of scenes, not just one, in LA. The Map Pointz page is mostly focused on party crews and raves. That's more because at the time when people started creating these party crews, they didn't want to associate with anything else but the raves. So Map Pointz is about creating a separate space within another space, but the focus is still people of color.

You grew up in LA in this moment you're creating this visual archive for... Can you tell me a little bit about party crews and what they were?

The party crew scene started in the late '80s early '90s, and they were groups of teenagers getting together and throwing backyard parties and raves in warehouses all over LA and Southern California. My sister and brother were in two different party crews and introduced me to the scene. Each party crew has a different name, so my brother's party crew was East LA's Madness and my sister's was East LA's Cuties and I was East LA's Aztek Nation. We gave ourselves names we felt good about - not exactly like it was empowering, but something that best described who we were.

Did each party crew have a different vibe?

Yeah, definitely. We had the rebels, we had ravers, we had greasers. There were as many different styles as there were types of music we listened to. There were party crews that only listened to techno, stuff like that.

What were you into?

I really loved every type of music. House music, rap, Morrissey, techno, all that stuff.

The usually started around 9:00 or 10:00 on the weekends, and then we organized ditching parties during the week, and those started around 7:00 in the morning. The parties would last an hour or two, but there was always more than one party going on - we always had another party to go to. We also had the warehouse parties down by the LA river. Everything that we played was all vinyl and there were like five DJs at every party.

What are map points - weren't they a way of finding parties?

Yes! It was definitely before Google maps or cell phones. We were using Thomas Guides, and map points were the locations we went - like say a gas station or two main cross streets - where someone like a promoter would be waiting with the directions. So we'd pay them, they'd give us the address and then we'll go to the party.

Yeah, it's kind of crazy!

Do you have any favorite memories from that period of time?

It's sort of surreal to see these pictures of these beautiful girl crews walking across the street in Echo Park in the '90s wearing literally exactly the same thing that people that age are wearing today.

It's interesting you should say that because that came up a few days ago I posted this image that a friend of mine took. It was a photo from 1992 and it's a couple walking in Boyle Heights, and a lot of people in the comments were seriously doubting that it was from 1992. They're like, "There's no way." But the thing is, the people that were saying that are young people - teenagers or people in their 20s - you'll see them in the comments and you have to say like "no, look at his shoes, they don't make those anymore." I think a lot of people were having a hard time with it because that style came back.

As the administrator for this project, have you learned anything about your community that you didn't know at the time?

Yeah, I'm constantly learning from people. I have more appreciation for people that were designing the rave flyers. It's something I never really thought about when I was growing up or when I was going to these parties. I never even thought - who made these flyers? You know what I mean? Everything we were doing from how we designed the flyers who organized the parties, who were the best DJs – things like that. There are people that are making a living now out of the thing they were doing as teenagers. A bunch of them are successful well-known DJs who started off DJing at a backyard party. Also people who are running their own business, doing graphic design and stuff like that - it's something that's very new to me and it's something that I also like to talk about in the work.

You were named LACMA's first ever Instagram Artist in Residence this year. What does it mean to you to have your project and the people and culture it represents acknowledged by an institution like that?

It's really amazing. When I took over their Instagram, it was also something that wasn't that easy. I'm entering a whole different platform where people might be disrespectful, or racist or all of the above. Overall, it was a really great experience and really new to a lot of us. I think people learned from it, and I definitely learned a lot from it.

Do you think that social media has the power to change the way that POC histories of marginalized communities gets recorded, remembered and shared outside of mainstream white historical narrative?

Definitely. It's definitely a tool that a lot of people have access to, especially the younger millennials. People have access to words, language and news ways of expressing ourselves and people learn from that. It's definitely something that is making a difference. I noticed after I left LACMA, they also adapted this new way of thinking and talking on social media. The short answer to your question is: definitely.

Check out some of our favorite photos from Veteranas and Rucas and Map Pointz in the slideshow below...