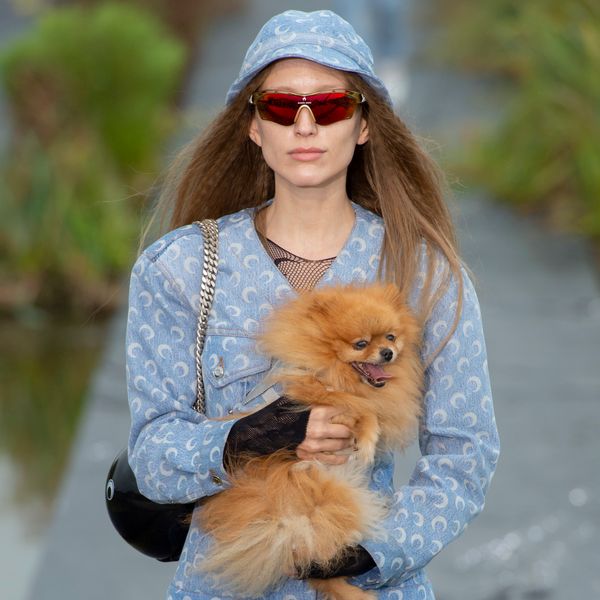 Dogs, who have conquered the internet from feckless cats, are stars. Little domesticated carnivorous balls of joy that just want lots of pets and lots of love. And so it was a real treat when they took to the runway at Marine Serre's fantastic, apocalypse-inspired Spring 2020 show. Serre told the press that her collection was influenced by the idea of a post-apocalyptic world in which there are few survivors of climate wars and a mass extinction event. It's good to know some puppies made it.

One model in a fitted yet utilitarian jumpsuit with giant cargo pockets pulled an elegant black dog down the runway with a black leather leash featuring Serre's signature half moon logo. The dog wore a military-style vest. In videos it pranced elegantly, hair flowing perfectly.

A big-haired pomeranian was also in the show, though it did not have an outfit. Scandale! Free the pomeranian nipples or whatever. The little pup was carried by a model in a full logomania look — she wore a denim bucket hat, jacket, and matching skirt covered in Serre's logo, with matching half-moon tights.

Serre, an LVMH prize winner, showed her spring collection in the pouring rain (she even sent out umbrellas as invitations) at a racetrack on the western edge of Paris. The young designer calls her work "futurewear," and much of her clothing seems like really, really cool survivalist gear. The environment and its rapid degradation are major points of interest for Serre; the spring collection was titled "Marrée Noire," oil spill in English. As Vogue reports in a deservedly stellar review, 50% of Marrée Noire was made from upcycled materials, and the other 50% is produced locally with fabric from French mills.

"This season was about showing all the things that the brand can do — of course, I do a lot of upcycling, but I wanted to show that I can do tailoring, that I can do menswear, that I can work with different materials," Serre told i-D. "I'm trying to sharpen what the brand's identity is, to make it really wearable but still keeping the raw energy. It's about trying to find that balance." She clearly succeeded.