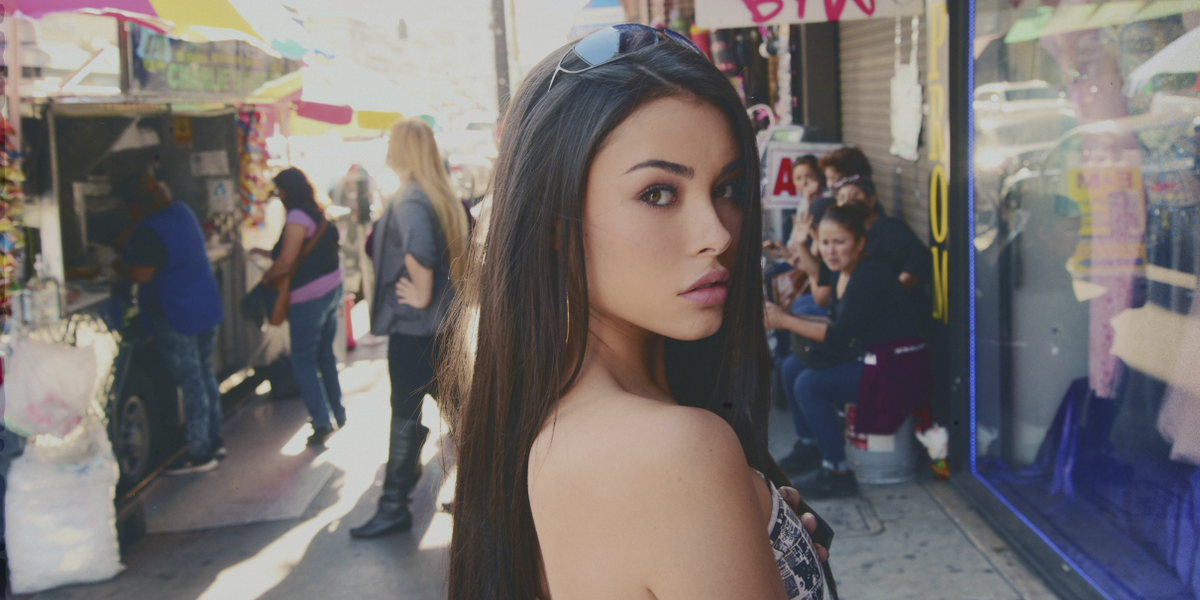 Madison Beer Is Doing As She Pleases, and It's Paying Off

What were you doing at age 18? Plotting a fake ID, thinking about your summer, texting that guy who wore Nickelback-meets-Rufus Humphrey leather wrist cuffs? Classic. It's unlikely you were discovered by one of our generation's biggest pop stars, or presenting your first, full body of work to an already-amassed 10 million-strong fanbase — all the while subverting music's middle men to do things your own way.

Meet Madison Beer. Signed personally by Justin Bieber after he found her on YouTube as a tween (Beer became a worldwide trending topic on Twitter once he tweeted her cover of "At Last"), Beer has risen to become one of the most sought-after teenagers of the 21st century. With a voice that could be the product of a Christina Aguilera and Amy Winehouse union, it's no wonder Beer is hot property.

Despite her New York upbringing, Beer has more than been handed the keys to Los Angeles — her home since she was 14 — running with the city's inner circles alongside LA's coolest young influencers. Her summer drop, "Dead," was one of the biggest songs of the season, and stars Cindy Crawford's son Presley Gerber in the accompanying visual. All this success is, unfathomably, prior to Beer's release of anything more than a single. Today marks her official debut with EP, As She Pleases, a R&B-pop crossover that is set to send fans into a frenzy.

To celebrate, PAPER caught up with Beer to chat creatively, taking control and keeping one eye on your back.

PAPER: Hi! Are you sick?

I've literally been so busy these past 24 hours, so my voice is kind of gone. I haven't had time to do anything other than scream at everyone and freak out.

You've had huge hits and such a big come up. Why release the EP now?

Honestly, I just didn't feel like I had found my sound yet, until recently. I started putting out music when I was 13, so from 13-19 you change so much you grow so much and discover who you are. I also had like terrible taste in music back then, and I thought I had really good taste in music so I would try to mimic some of these artist that I thought were really good.

What was your taste? Who did you love?

Not like it was bad, it was just immature. I've also been super mature for my age for my literal entire life. So I've always been super grown for my age. I made like 100 songs at least, so I made all these records when I was younger and people were like, "Oh yeah, we're going to put an album out and I was like, "No I don't like this anymore, I don't like this anymore." And they said, "You can't keep making songs and scratching them," and I was like, "This is my name, this is my brand, this my career." So to me it was like really important that anything I was putting out was 100% true to me and had my vibe in it. This stuff now that I'm putting out tonight, is the truest representation of who I am and the growth I've had and what I've gone through. I just feel like it's a true representation of who I am and what I've done, and what I'm about.

You've taken this really R&B pop route. What went into formulating it?

In my dream world, if I could make music it would sound like Amy Winehouse, but like Amy Winehouse in the 80s with 80s synth. I have the weirdest music taste and I'm so into 80s music, and synths, and inflections. I just like stuff that sounds weird like Tame Impala could run me over with a car and I'd be like whatever. I'm literally obsessed.

I remember seeing a video of you covering "Toxic," and you asked the crowd, "Has anyone ever heard of this person?" and everyone was said "Ah..."

Melanie Martinez. Yeah, some people really don't get my vibe or humor or understand that I literally just like love music. And when you're so passionate about something it's like, I don't know man, it's just like I have so much shit going on that for something to be able to completely remove me from all the hectic-ness in my life — it's just special. I really value that and value the music I listen to it. It's weird because people who are health freaks and refuse to put cheeseburgers or like fattening food in their bodies because they know how badly it will effect them. For me, because I take music so serious, that's how I am with music and what I listen to really affects me — whether it's good or bad. Like I could be listening to Nirvana "Lithium" and be like jamming out or I could be listening to Lil Pump and it's more about what mood am I in and how is it going to change it or effect it, or anything of the sorts. And I just take it all very seriously, so that's why me putting my own stuff out I wanted it to be a song for every mood, for every feeling, every kid.

Speaking of your hectic schedule, you were very much welcomed in LA and on the scene. What's the pressure like in that environment?

I'm not the biggest fan of LA if I'm being honest, if I had to move anywhere it would be New York or London, or honestly my dream would be to live in Saint Tropez in the middle of nowhere and not speak to a person ever again. I don't know if that will ever happen [Laughs], but I am such a people person, I'm very open and honest and I speak my mind a lot. I'm such an accurate representation of New York, but in LA a lot of the times I get misconstrued and people think I'm obnoxious or annoying but they really just don't understand I'm genuinely just a loud-mouth New Yorker. So I feel like that's why a lot of people don't really understand me and that could be why I have issues in LA.

It must be difficult navigating people's intentions and evaluating who has your best interest.

I'm pretty good on my own, like if someone's talking to me and I know they're bullshitting I just don't entertain that stuff ever like for a second because my mom has always given me that power of just knowing. I also don't want to call people out like I feel not enough people say how they really feel like what's on their mind, and I've always been that person that if something's bothering me or if I feel like something's not being taken seriously — Oh my god, I just drove past this girl that I HATE, I'm not even joking I actually just drove past this girl who I actually think is spawn of the devil, she is so evil.

That is so crazy considering we were literally just speaking about this.

I'm not even trying to like go off on tantrum but this girl that I just drove by. This drama just happened recently with her and I hadn't seen her since. But she's just basically like, I'm just very much a vibe-y person and I just see people's auras and she's just like such a dark person I can't even explain it to you. But basically, that hasn't been the hardest part I think the hardest part of living in LA has just been like, the other day or a few weeks ago I was in the hospital because I got really sick and not having any my family there with me was just hard. That kind of stuff really affects me. Like if I don't feel well and I don't have my mom to feed me soup. Like for me, I'm so used to that and being with my brothers 24/7.

Uh, yeah I have like best friends and a group. I have like a good group that I know care about me but there are still people who try to wean themselves in may not have the best intentions. Like there's this girl and I'm obviously not going to name names but one girl that I know is only trying to get in my friend group to gain followers or look cool or whatever it might be. But I'm just lucky that I'm aware of these things whereas one of my best friends, Isabella, who's like the sweetest, nice girl- which sometimes it's like a double edge sword to be so sweet because it's just like she's letting in people that are just going to hurt her in the long run. Like this girl I'm talking about now that is trying to get in our friend group has already hurt Isabella because Isabella has been so open and kind to her and I want her out because she's not a good girl, she's a bad seed, don't let her in, and she did and now this girl is like spreading stuff about her. I think it's important to have eyes on that stuff.

There's also an interesting conversation about female representation in music at the moment, particularly post-Grammys after the recording academy president told women to "step up." What has your experience been like for women in the industry?

My experience, it's been good, I definitely had moments where I thought you know, "If I were a boy this would be so much easier." Because it's true, guys in a lot of ways I think do have it easier. And I'm glad that now it's recognized and it's not something people just chose to ignore anymore.

Sometimes a lot of young female artists feel like they had to push back against being molded. Did you ever feel like you had to fight to remain true to yourself?

Yeah, for a long time I was told what to do and how to do it for so long.Then I got to a point where I was like I don't care what you guys want and I'm going to do as I please. It's my life, my career, my face, I can do whatever I want so it's like "as she pleases."

Since this is the first time fans are being offered a robust offering from you, what's the dream response?

Do what you want in life, feel empowered and be yourself. I want people to feel more confident and empowered and sexy and bold. There's a lot of different parts of myself I want people to digest and really take away from. I just kind of always do as I please, and I think other people should always feel like that.