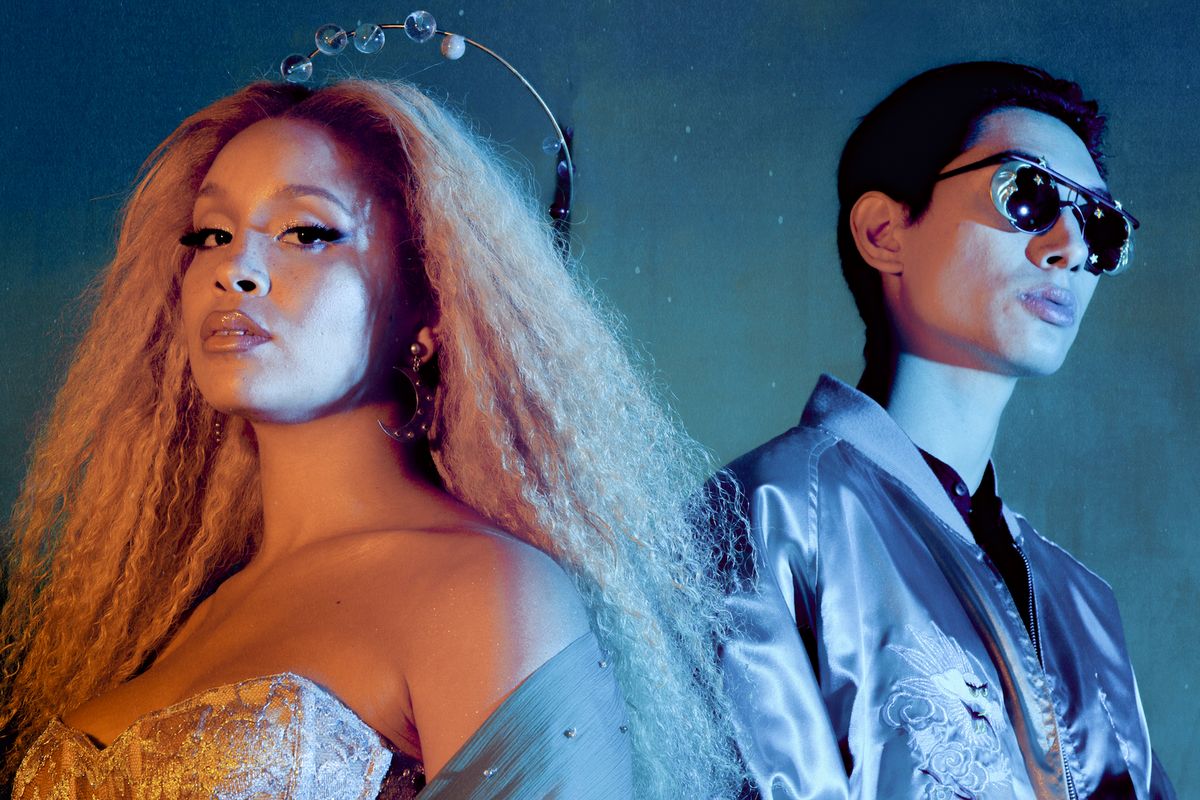 It's been three years since singer-songwriter Jillian Hervey and producer Lucas Goodman, the musical duo behind the increasingly popular Lion Babe, dropped their debut album, Begin. The freshman project was an impressive introduction to their signature, contemporary funk-soul medley, anchored by singles like "Treat Me Like Fire" and the Childish Gambino assisted "Jump Hi." Since then, Hervey and Goodman have toured around the U.S., using their time on the road to recharge musically and source new inspiration. It wasn't until the two returned back to New York City, the place they both call home, that they gained the energy and innovation they needed to record their second album Cosmic Wind, out now.

Lion Babe approached their sophomore effort with studied confidence and hard-earned knowledge of the type of artists they want to be. The result of years on the road and in the studio, tinkering away? An energetic and sensual sound that they've dubbed 'futuristic nostalgia.' "We reference elements of music from the '70s and '90s (when we grew up), but obviously are totally influenced and love what's going on now," Hervey said.

Lion Babe's appreciation for '70s soul and jazz — and the current hip-hop sounds of today — led them to revisit the music of Alice Coltrane and also source from emerging rappers like the enigmatic Leikeli47, who's featured on the album's lead single, "The Wave." The group's love for lo-fi hip-hop legends like J. Dilla and Madlib is apparent throughout Cosmic Wind; for their single "Western World," Lion Babe tapped Wu-Tang rapper Raekwon to lay a verse on a track that would otherwise be considered pure contemporary R&B.

Related | Kelela and Junglepussy In Conversation

Like any great duo, Hervey and Goodman are growing together both musically and personally. Cosmic Wind, amidst all of its genre-blending tracks and contrasting sounds, is a presentation of the holistic space the group is in at the moment. Rather than letting the unique mix of sounds make the project feel complex and scattered, the blended nature of the album shows the diversity and range of the group and conjures all the good feelings hip-hop, soul, and R&B music bring.

Lion Babe spoke with PAPER about their new album, Cosmic Wind, and their love for hip-hop and soul.

Why the name Cosmic Wind?

Jillian Hervey: Cosmic Wind represents transition, change and transformation — particularly where we are in our lives and what we've accumulated both as artists and also just as people. You have staples that mark different parts, and moments for your life that kind of define and shape who you are. We're exploring that, knowing when you're shifting into a different one. We're both in our late 20s going into our 30s, so it can specifically be tied to that, but it's also pretty universal. The themes are tools or hopefully little reminders that everyone's going through the same stuff.

What was happening in your life when you made this album?

Lucas Goodman: We were both back in New York, [which is] where we're from and what we rep, but we were spending a lot of time on the last album in London. After that album, we basically went on a U.S. tour, then we came back to New York. It was the first time we were in our own, new space. We got a studio out in Greenpoint, so we were working there on the full album. I think just to be back home with friends and family is kind of this new chapter in our lives.

JH: Returning home and returning to yourself, it got introspective. Being in an environment that we always know we thrive in. I think as artists we just like creating in New York. It makes a lot of sense for us.

What were you listening to during the recording process?

JH: I listened to a lot of Alice Coltrane in the morning. I definitely listened to a lot more jazz. We were really chasing our own tails from "Treat Me Like Fire." That song just popped off and we're like, okay, you're a band, you have to still release stuff while you're growing. I definitely knew for this album that for me as an artist, I need to do more outings to just digest different art forms and to see what's inspiring me. I did feel like we had our heads down so hard that I wanted to bring in more depth into what I was focusing my whole life on. Definitely seeing jazz, going to museums, trying to travel and putting myself in different spaces was valuable for this.

What made you tap Raekwon for your single "Western World?"

LG: We made that record "Western World" and we had it for a couple of months. I guess we got to a certain point of the song when we were like, 'Where do [we] want it to go next?' We thought it would be cool to have a feature on it. We love Wu-Tang, their sound is really influential to us even in the whole aspect of just taking pieces of other music and flipping it up to make something new. We just imagined him on it. We were like, 'Oh wow, he'd probably sound dope.'

How did hip-hop influence this album?

JH: I definitely wanted to explore hip-hop and soul sounds more. I felt that on our last project, I was such a new song writer and also we were working with a lot of different people. It was really a nice freedom to be able to go into this album and feel like I could just commit to it. A lot of times, even during our first album, if I was writing something in that vibe they might be like, 'That's too lo-fi or whatever.' It had to pass the test. This time, I'm like, 'I can grade myself,' so I think that stuff is more honest for me. I admire people like Lauryn Hill, Erykah Badu, and Debbie Harry. I think people who are able to mix so many different parts of their voice and stuff and give you a lot of different things that are still the same felt right for me for this.

What are some new sounds you experimented with on this new album?

LG: There's definitely a lot of sampling elements to it. Going back to a lot of music I came up listening to like Dilla, Madlib, Kanye — just all that kind of production. So we would sample, but then we'd have all live musicians come in and replay the parts. It's like that sound except maybe a little broader or wider, with the being able to have all of the other musicians play on it too. It's a mix of that with modern sonics.

What good advice did you get while working on the album?

JH: The thing that stuck with me this album more than most things is the advice I got from Q-Tip. We once went to Q-Tip's house, which was absolutely amazing because he's one of our heroes as well. He told me to sing in the way that you're supposed to be expressing the words, like the sounds that you'd make when you'd be talking about them or you feel them, think of making that shape with the sound. I kept thinking about that. Just trying to be really honest with what those rhythms were for me and what felt right. Usually, it would be a huge jazz scat that I would leave for Lucas to stitch through, but now I was just trying to challenge myself to repeat something and just try to really spit out words.

What inspires songs like "Sexy Please" and the album's overall sensual attitude and vibe?

JH: I'm a very sexy person. I think so is Lucas. We are sexual people and sensual people and I think that's always the music that gets me anyway. When "Pony" comes on, it is what it is. Sometimes those songs everyone can relate to that, everyone has sex, everyone is sexy in their own way. We always just need to have that very feel-good thing.