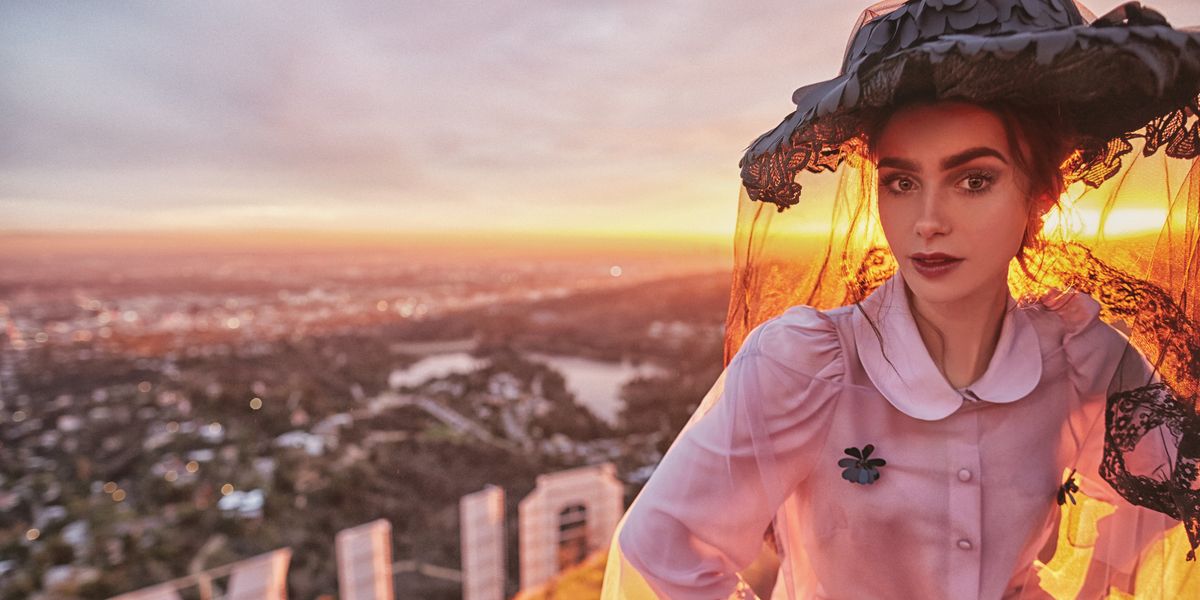 Ahead of playing one of the biggest parts of her career — Fantine in BBC's upcoming Les Misérables — we cast Lily Collins in a new role as a mythical angel of Hollywood, flitting unseen through the streets of Los Angeles while giving young, starry-eyed hopefuls some divine inspiration.

Lily Collins isn't the type of person who relishes downtime. So in 2016, when the actress saw an unusually blank stretch in front of her work-wise, she decided to fill it by writing her first memoir. She set up six months of intense deadlines, but "of course, as luck would have it, the second that I got these deadlines and a publisher and editor, I booked three [acting] projects back to back," Collins says. "So, what was going to be my Sex in the City / Carrie Bradshaw / move to New York and write a book moment then [became] writing in and out of LA on sets. It turned out to be one of the proudest accomplishments, but also one of the hardest things I've ever done."

The end result was last year's Unfiltered: No Shame, No Regrets, Just Me, a well-received collection of honest, introspective essays reflecting on life as the daughter of a megastar father (Phil Collins of Genesis and solo fame); growing up in LA after moving from England following her parents' divorce; dating and her longtime struggle with an eating disorder. The book's release was timed with her starring turn in To the Bone, a Netflix film about a woman battling anorexia that earned Collins rave reviews but also had her preparing for the physically and emotionally daunting role while digging into her own past. "I felt like I needed to unload some baggage in order to move forward on a clean slate," she says. "It just so happened to be before I turned 30, which was wonderful to go into that next phase of my life, but it was also something I knew personally and also professionally needed to happen."

Writing a soul-searching memoir while starring in a wrenching drama is pretty indicative of Collins's overachiever nature. Her famous last name might have opened some doors — which she's been candid about her whole career — but it's clear there's a gritty determination that's never allowed the diminutive brunette to rest on her laurels. Take, for example, when she was aiming to launch a career as a TV host and reporter while a student at the University of Southern California. She was sent to cover President Obama's 2009 inauguration on one of the coldest days on record in Washington D.C. — and got actual frostbite in the process. "I was literally freezing," she says. "I was under 10 of those silver blankets that make you warm and my feet got so cold I had minor frostbite and the next day on the flight home I was in so much pain... I had to wear flip flops because I couldn't fit into my shoes because they were so swollen."

"People are going to have opinions on who these characters should be [...] you're never going to be everyone's perfect version."

Her toes stayed intact after that frigid day, but the Golden Globe Award-nominated actress (for 2016's Rules Don't Apply) found herself freezing again in the streets of Brussels this past winter for one of the biggest roles of her career. Collins takes on the iconic part of downtrodden Fantine in the upcoming BBC adaptation of Les Misérables, also starring Olivia Colman, David Oyelowo and Dominic West, which will reach American audiences this spring. "It was mental," she says of the five-month shoot in Belgium. "It was, at one point, I think minus 13 [degrees]. I was out in the streets. They filmed the end of [Fantine's] life first because it had to go chronologically in terms of weather — from winter to summer — and the end of Fantine's life happens in the winter. My second day of filming I had to die. And I worked my way back — literally raised her from the dead."

Taking on one of the most coveted roles in the world for a young actress was a feat not lost on Collins, especially given the intense emotional attachment Les Mis fans feel to the story. But when asked if she felt any nerves on how superfans might receive the six-part non-musical, she appears pretty even-keeled. "People are going to have opinions on who these characters should be and how they should act," she says, "and you're never going to be everyone's perfect version of these things. [Les Mis director] Tom [Shankland] was a huge advocate for me of bringing me."

That blend of Collins's personal journey and the willingness to deep-dive into the lives of the characters she plays continues to serve her well as her career thrives. Shortly after Les Mis premieres, fans will see Collins in Tolkien, the much-anticipated biopic about the legendary author that sees the actress playing J.R.R. Tolkien's wife. In the meantime, though, she's already laying the groundwork for another memoir. "I'm constantly taking notes and adding to the file for number two," she says. "[I'm] having conversations with friends where I go, 'Oh my god, this is amazing. Wait a second. Please hold. Don't think I'm being rude. I just need to make this note because I don't want to forget anything.'"