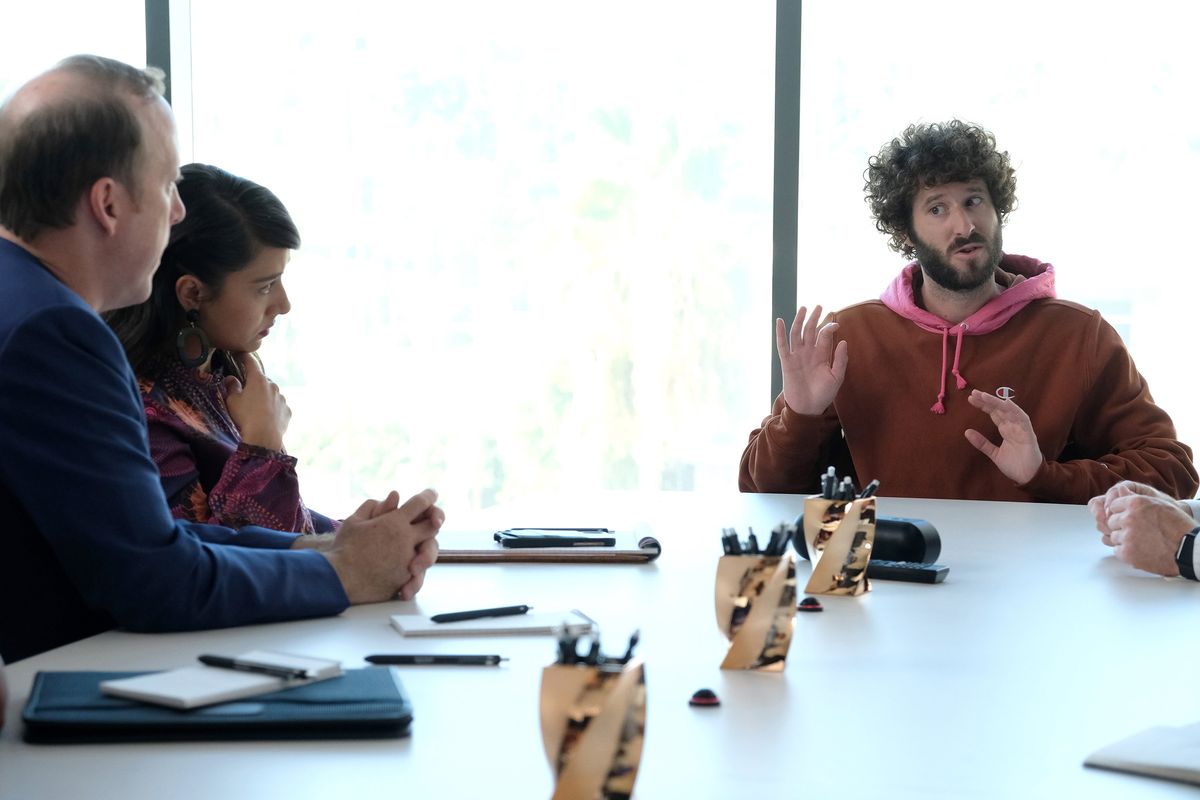 In Defense of Lil Dicky

Lil Dicky is a polarizing figure in rap music. On the one hand, you have those who "get what he's trying to do" and think he's a funny artist who is expanding on the idea of what it means to be a rapper while writing great satire. On the other, those who think he is a clown who makes joke hip-hop that reeks of white privilege. What's undeniable is his technical skill, but the impressive delivery and complex rhyme schemes are contradicted by shticks, penis jokes and fake voices.

His first big release, a 2013 video entitled "Ex-Boyfriend," racked up over one million views in 24 hours. He spends a third of the song talking about his girlfriend's ex-boyfriend's penis and how much better it is than his. It's a harmless and mildly funny take on masculine insecurity. Another early release, "White Dude," was intended to be thoughtful but mostly ended up tone deaf. His megahit "Freaky Friday," featuring Chris Brown, shows Lil Dicky in Chris Brown's body excited to be able to say the N-word and Chris Brown in Lil Dicky's body thrilled to be rid of his checkered past (read: domestic abuse). The track was all kinds of problematic, and fully exposed that which Dicky was presumably aiming to satirize about himself.

When someone is attempting to cram topics that our world's greatest thinkers haven't yet been able to solve into four-minute comedy songs, things can begin to feel try-hard and contrived. Every line is either a joke or a boast, which makes repeated listens exhausting. So when a friend suggested I watch Dave, I initially shrugged the suggestion off, expecting more of the same — especially since, for the uninformed, the show is about a very roughly fictionalized version of how Dave Burd's path to rapperdom actually played out. However, the friend's persistence convinced me to give the show a shot. I did so with extreme scepticism, but was surprised by what I found.

The show finally makes clear that Lil Dicky is a comedian who just happens to be very good at rapping. He even said himself that he always used rap to get attention comedically so that he could hopefully one day write scripts and act. Compared to scripted television, comedic YouTube music videos are a blunt instrument when it comes to addressing ideas around race and power. When given room to ruminate across ten 25-minute episodes, those themes feel like they're coming from real places with real stories and real feelings. We learn what makes Lil Dicky tick and gain insight into his many neuroses and absurd confidence, which upon relistening to his music and reading past interviews become all the more evident.

The opening scene of the entire series is, of course, centered around a dick joke. His viral hit in the show is entitled "My Dick Sucks," and Dave's genital insecurities stand in for his larger inferiority complex as a white rapper trying to make it in a Black genre. It's a plight that surely no one, save for a few Asher Roth and Lonely Island wannabes, would take much pity on, and nor should they. In watching Dave you don't empathize with Lil Dicky's struggle to make it in the rap game, but you are drawn in to his feelings of inadequacy and self-doubt anyway. The show tackles topics around mental health, relationships and escaping the past with surprising nuance and creativity, as in episode six, when we see Dave murder his younger self Tyler Durden-style after a series of flashbacks reveal how he used to publicly embarrass himself at summer camp for attention and a sense of belonging. We see him come to the realization at the insistence of Elz, his former bunkmate and current producer, that his camp friends only kept him around for amusement.

Lil Dicky's personal journey aside, a bounty of supporting characters also bring depth to the show. Real life hype-man GaTa, in his first acting role, plays an integral part in the story, serving as a constant voice of reassurance behind Lil Dicky and at the same time growing as his own character. The show really hits its stride in episode five, when GaTa admits to the crew he is bipolar, bringing them all closer and illuminating why he is who he is. His girlfriend Ally, played by Taylor Misiak, is a major character for most of the show and objectively hilarious, although she primarily seems to serve only to help develop Lil Dicky without having many hopes or goals herself other than for Lil Dicky to be a better boyfriend; a new-age manic pixie dream girl of sorts. Andrew Santino plays Dave's roommate and eventual manager, Mike, with just the right amount of scepticism coupled with deep-down belief in Lil Dicky's rapping career, so much so that he quits his job in finance to become Dicky's manager in an industry he knows nothing about. In a hilarious exchange, he discusses meeting famous rapper Todd Dillerson, who obviously isn't a person. Dicky finally gets to the bottom of the mystery and susses out that it was in fact Ty Dolla $ign. Christine Ko is a hilarious stoner-creative friend who sets Dave on the right track and humors, with a firm hand, his neurotic impulses. His producer, Elz, played by Travis "Taco" Bennet of Odd Future has an arc developing self confidence approaching other rappers, namely Trippie Redd, to work with him.

Countless musicians play smaller roles in the show, helping to illustrate Lil Dicky's ascendence: you'll find cameos from YG, Mackelmore, Young Thug, Gunna, Justin Bieber, Benny Blanco and more. Even Kourtney Kardashian pops up. And it's no surprise the show has such star power when you look at some of the people involved in its production. Jeff Schaeffer, of Seinfeld, Curb Your Enthusiasm and The League is co-creator and executive producer. Other EPs include Kevin Hart, Scooter Braun and Superbad director Greg Mottola.

Dave takes cues from Donald Glover's Atlanta, also on FX; Dicky's character is similar to Glover's in his burning desire to make it when others doubt him. GaTa was clearly made in the mold of Darius as well. Make no mistake: Atlanta is the more innovative, original and frankly, better show. But where Atlanta often feels like a fever dream in its off-the-wall randomness, Dave feels more like a lucid one depicting a man battling his inner demons in an attempt to accomplish his life's goal. And on top of that it is genuinely funny. FX is arguably the best network of the past decade, and Dave fits their programming perfectly.

As a 30-year-old white man, I'm clearly Dave's exact demographic, even if I didn't want to enjoy the show at first. But I think there's something here for others, too. Whether you're a fan of comedy or hip hop or both, the question of who gets fame and why is eternal, as are the themes of insecurity, doubt and running from one's past. In the year 2020, should a slightly tonedeaf white Jewish guy get not only a string of viral rap hits but also his own TV show? And if the answer is yes, how can that TV show remain entertaining while also thoughtful and self-aware? Dave is at least trying to answer these questions honestly, and that makes it worth a watch.