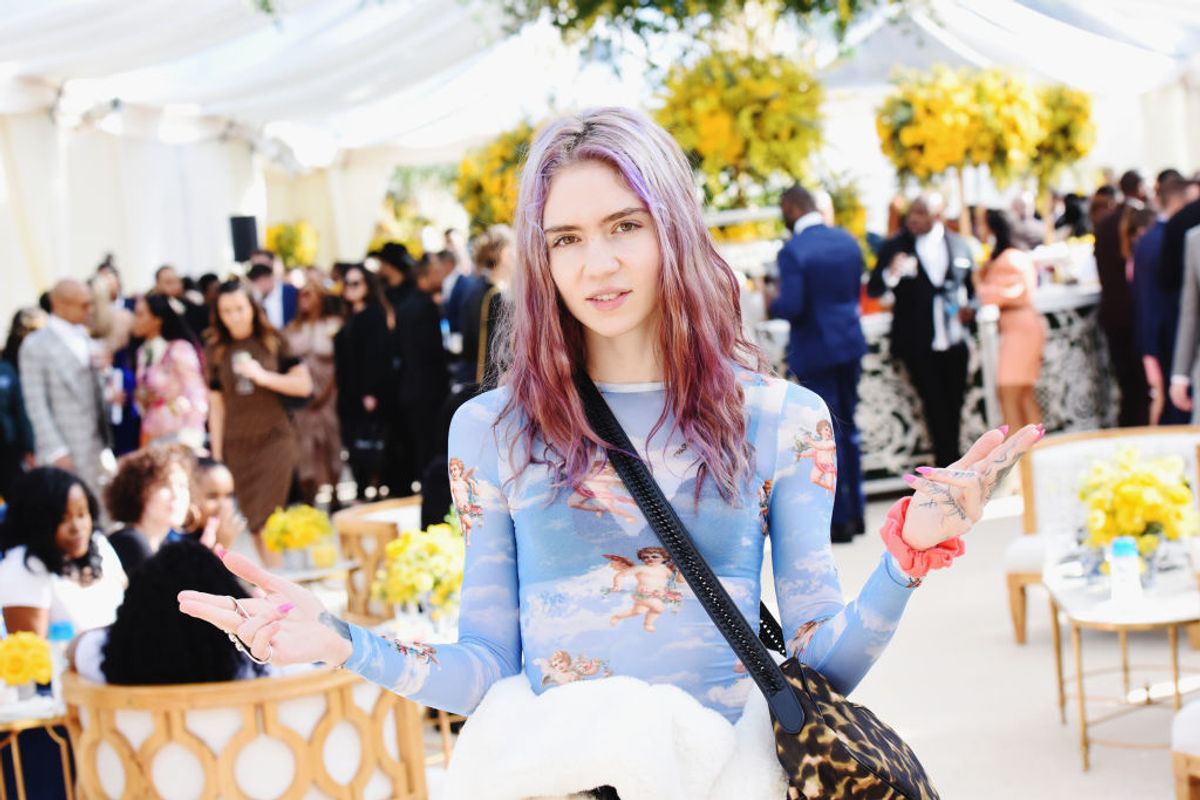 At first glance, it wouldn't appear that Lana Del Rey and Grimes have too much in common. Grimes once opened for Lana's Endless Summer tour back in 2015, but their artistic styles couldn't be more separate. In a new conversation for Interview, though, the odd couple find common ground.

Both musicians have spent time cultivating fanbases based on thoughtfully created personas, and their albums are essentially universes for those alter egos to dwell in. They even share a tendency toward using all-consuming romance as creative inspiration. "I so need to be in love to make good art," Grimes confesses to Lana. "The best is being heartbroken, or in a volatile relationship. My worst creative periods have been when I've just been in a stable relationship."

Additionally, both Grimes and Lana have reached exciting, rewarding points of their career. Del Rey's latest album, Norman Fucking Rockwell, was a critical darling, and received Record and Album of the Year nods at the Grammys. Grimes' upcoming album, Miss_Anthropocene is highly anticipated by both fans of her increasingly eccentric internet presence and those interested in themes of climate change and personal autonomy. (Grimes has a separate chat with actress Brit Marling to further unpack her theories on A.I., the future, and then some.)

Here's what else we learned from the Grimes and Lana conversation.

Miss_Anthropocene is inspired by the heavens

When Lana asks about influences on Grimes' next album, Grimes brings up her fascination with gods and goddesses. "I'm really obsessed with polytheism," she says. "I love how the ancient Greeks or the ancient Egyptians lived in this weird anime world where there were just tons of gods that could be anything." On Miss_Anthropocene, Grimes will explore the concepts of "anthropomorphizing...every form of pain" by creating a "a modern demonology or a modern pantheon where every song is about a different way to suffer or a different way to die." It's hard to know what that means exactly, but with dramatic song titles like "Violence" and "So Heavy I Feel Through the Earth," it certainly seems like... mission accomplished?

Grimes is in a chaotic but strong place these days

It has been a turbulent time for Grimes, especially since she's in a public relationship with controversial tech Elon Musk and notably, since her public beef with Azealia Banks. Lately, Grimes says she has "recently fallen into a place of extreme flux, where [she] feels like [she] doesn't know myself at all, but it's also the most self-assured [she's] ever been."

Right after mentioning her tendencies to "[say] stupid shit in the press or tweeting dumb shit," Grimes transitions to talking about outrage culture (which is...Twitter culture) driving interactions online. She muses, "We live in this weird time where we didn't evolve to engage with this many people, and we didn't evolve to be observed as much as we're being observed, or to observe other people as much as we're observing them."

Grimes states, that, on the whole, she believes we're transitioning from a period of monoculture to more diverse interests again. "Everyone was in agreement on who the biggest stars in the world were. Everybody knew Michael Jackson and Madonna," she says. "But now, with the internet and all of these different forms of media, we're entering a new period of customization again where people are able to customize their existence more."

Grimes believes the last generation of human artists is now.

With the continuing progress of artificial technology, Grimes thinks that, "We might be in the last decade of people who get to make art without competing against computers that are ten million times better and faster and more exciting and more intelligent. We might be some of the last human artists who aren't completely rendered obsolete by artificial intelligence."

...and that AI can totally dominate mankind, but not in the way we expect. In fact, it might be "cool?"

Though some popular films might suggest that AI will someday overrule humanity by trying to kill all of us, Grimes proposes the theory that blackmail might be the route they take. She states, "What scares me is an artificial intelligence getting online, seeing everybody's search history, and then blackmailing all of us into doing whatever it wants." Taking the perspective of an AI, she continues, "It seems a lot easier than a violent takeover. If I'm an AI, do I hold everyone hostage with nuclear bombs, or do I just blackmail everyone? Killing a lot of people seems hard." But on the other hand, Grimes also thinks AI and carbon-based lifeforms could live harmoniously, "Everyone's so worried about the evil AI wiping us out. I think the AI will be cool."

Grimes needs an "edge" for her art, which includes rocky relationships. She says, "I so need to be in love to make good art. The best is being heartbroken, or in a volatile relationship. My worst creative periods have been when I've just been in a stable relationship." She says of her romance with Musk, "In my current relationship, we're both super alpha, crazy people. It's just level ten all the time, which is great, even though it's very crazy."