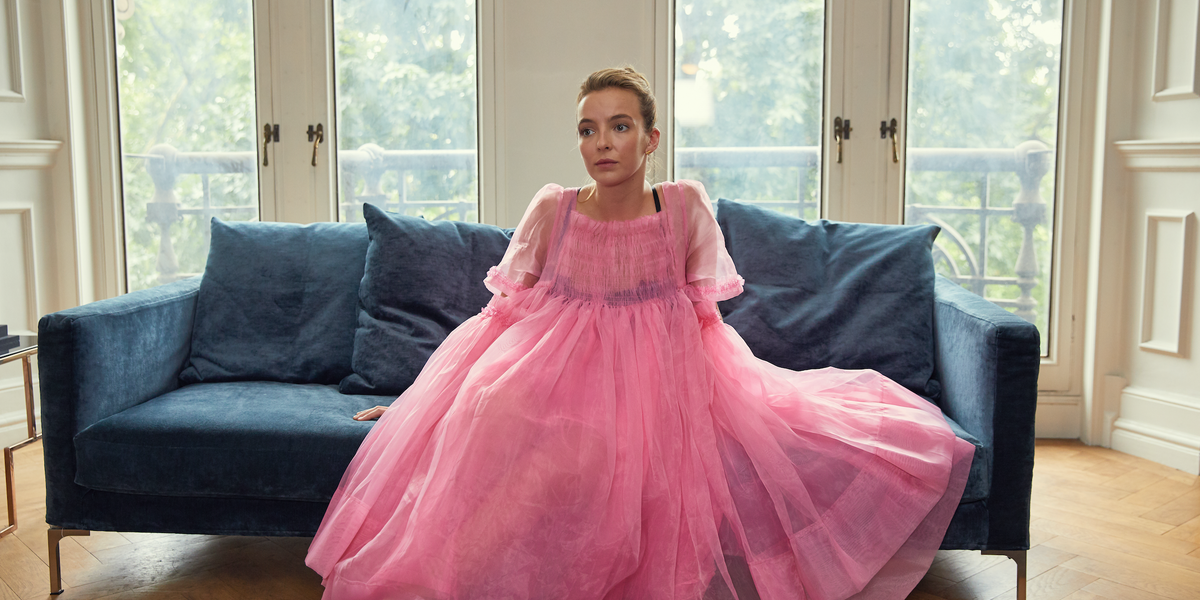 This article is a sponsored collaboration between AMC and PAPER

When the world was first introduced to Oksana Astankova (aka Villanelle) two years ago, no one could have predicted that such a blood-thirsty sociopath would become a huge fashion sensation. In fact, there are whole Instagram fan accounts now that are dedicated to the Killing Eve assassin's impeccable, power-feminine style.

Indeed, whether she's preying on her victims in tailored Chloé separates or in some irresistible vintage finds, never has a murderous on-screen villain looked so utterly captivating. She provides a perfect foil to the series' protagonist (and Villanelle's complicated love interest) Eve Polastri, whose muted and serious wardrobe is the polar opposite of her counterpart's.

Season 3 premiered earlier this month and if the first four episodes are any indication, costume designer Sam Perry is continuing to stay true to Villanelle's polished aesthetic while adding some of her signature whimsical touches. So in honor of everyone's favorite killer gracing our screens again, we decided to look back and dive deep into some of her biggest fashion moments from the show, from that romantic all-black veiled confection to the monumental Molly Goddard pink tulle moment.

The pink Molly Goddard dress that launched a thousand ships — or at least memes, fan accounts and countless Reddit and Twitter threads. It almost single-handedly revived the tulle trend for the entirety of 2018 from the runways in Paris to the sites of fast-fashion stores. But it also became the benchmark for a new time of TV villain that we hadn't quite seen before: someone whose enchanting, frothy exterior belies her murderous motives and all the complexities between.

One of the most heart-sinking moments of the first season was when Villanelle stabbed Eve's close colleague Bill multiple times in a crowded nightclub. The fact that she carried out the task in an alluring printed brocade suit by Dries van Noten is all the more jarring considering how heavy and dark the scene was.

It's not all designer labels for the style icon as she deftly demonstrated in this scene from Episode 3 where she's sitting outdoors in a frilly top by JW Anderson and tortoiseshell specs by H&M. Turns out high and low can co-exist happily in Villanelle's twisted world.

When Villanelle is given an assignment to kill Eve at her home, she shows up in a dazzling black sheer floor-length gown and custom polka-dot veil, her version of a "mourning dress," if you will. The dress is a rare 2012 couture find from Alexander McQueen, which I will certainly wear to my future husband's funeral one day.

Some of Villanelle's best fashion moments have come when she has to blend into her surroundings and wear something that doesn't scream "Killer on the loose!," as evidenced by her interpretation of a collegiate preppy look (khaki trousers by Raey and vintage shirt + tie) when she visits the Oxford campus to threaten Eve's husband Niko.

For the climactic final scene of Season 2, Villanelle sported a bright red peplum top and matching trousers from Lanvin paired with a wide Gucci belt that looked splendid on the cobble-stoned streets of Rome. Except most elegant women don't go around shooting their would-be lovers and leaving them for dead in plain sight.

Clad in an Isabel marant blouse and metallic pants with a horse-print blazer by Chloé, Villanelle effortly channels that Parisian cool-girl aesthetic women everywhere strive for when she returns to her hotel to meet Konstantin for the first time since she shot him.

When her new handler gives her a ton of money following her first assignment (which she was told not to spend all at once), Villanelle immediately goes crazy and has tons of shopping bags from big fancy broughts brought to her room. The queen of high-low, however, immediately steps out in these bohemian looks by Topshop and Anthropologie when she pays a visit to Niko's school.

This season sees Villanelle want to climb higher up the villain pole with the job of "handler" at the top of her list. Among her first fashion picks in her new role is this bold floral floor-length dress by The Vampire's Wife with a handy basket tote bag by Dragon, both labels of which are aptly named.

Villanelle continues her streak of sporting indie brands in Season 3 with this geometric shift dress by La DoubleJ which she pairs with Golden Goose cowboy boots for a country-meets-'60s mod fashion moment.

Watch the new season of Killing Eve on AMC and BBC America on Sundays at 9 PM ET and join us this Sunday, May 10th for a special after party at 10 PM ET.