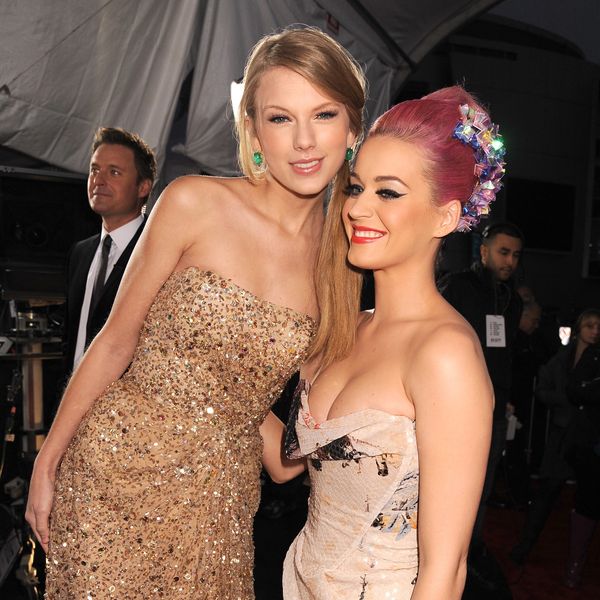 We thought we would never see the day where two of the biggest women in pop would finally bury the hatchet, but it seems like Katy Perry and Taylor Swift's longstanding feud is truly over.

Dating back to 2014, Swift claimed that Perry tried to sabotage an entire arena tour leading fans to speculate that "Bad Blood" was written about her. Perry responded with a subtweet "Watch out for the Regina George in sheep's clothing..." which would be the first of many subtle drags and digs exchanged between the two over the years, from shady fragrance names to a Nicki Minaj-assisted diss track. There were some revelations over it actually being about backup dancers, but by the time that got out it almost felt irrelevant.

As far as feuds go, it was like watching two soccer moms passive aggressively gossip about one another on a PTA Facebook page. And in keeping with the suburban mom theme, the feud fittingly ended last year with a plate of cookies. Perry even made a cameo alongside every gay person to ever exist in Swift's "You Need to Calm Down" music video to make it crystal clear that it was all water under the bridge.

A little over a year after that reconciliation, Perry is speaking out publicly about why Swift and her chose to end their feud in such a public way. Appearing on The Howard Stern Show Perry explains "Gossip and lies, they take the elevator. But the truth takes the stairs, and it just takes time. ... Time will tell my story. What I'm so grateful for is that we did get to make up and we made up publicly, and we got to be an example of redemption for young girls."

Perry goes on to say "It's hard for young girls, growing up [with] cliques and high school and pettiness and all that stuff, so now we're super friendly and I've always wanted the best for her and we can talk about the best we want for each other."

So there you have it folks, it looks like the Katy Perry v. Taylor Swift feud is officially a thing of the past which means it's time to find a new home for all those snake emojis.