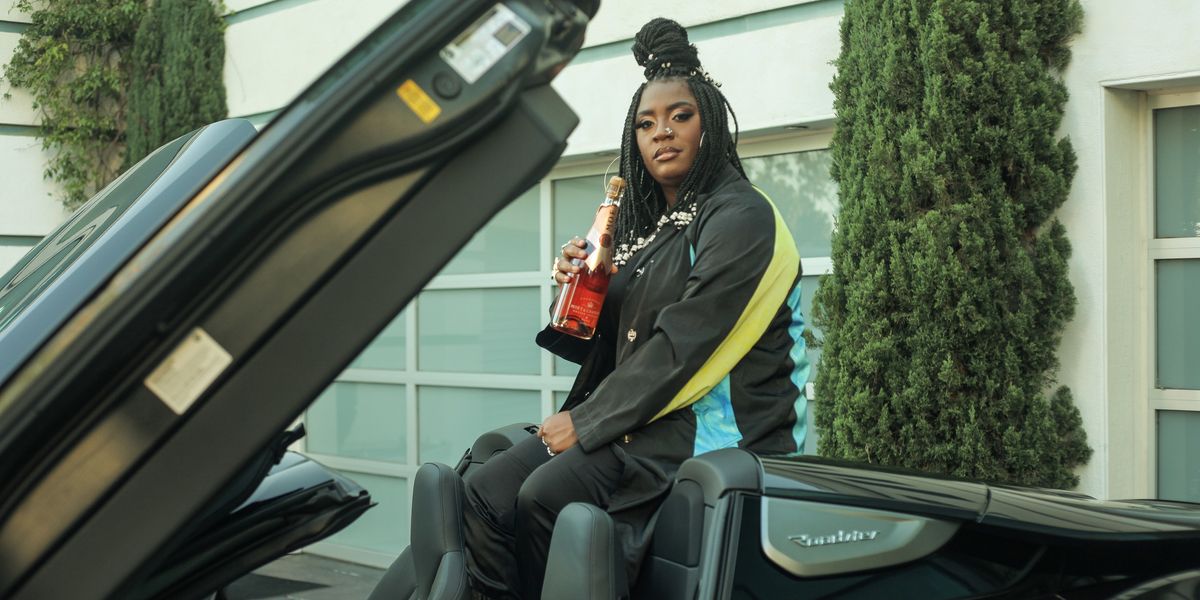 "I don't need nobody else," repeats Kamaiyah on "Pressure," the confident single off her 2020 album, Got It Made. After being stuck in a restrictive major label contract with Interscope for several years, the Oakland rapper's latest effort is a testament to her independence — and, more simply, her ability to execute a full-length project after being quiet since 2017's Before I Wake. "Find another me that's unlikely," she asserts on the track.

But Kamaiyah wasn't done after dropping Got It Made, an impressive 10-track project with features from the likes of Trina and Capolow, and hilariously addictive tracks such as "1-800-IM-HORNY." In June, following the murder of George Floyd and Black Lives Matter uprisings, she dropped a more serious anthem, called "Black Excellence," as yet another statement of her power. "Check my melanin," Kamaiyah raps, telling PAPER the song is about knowing your worth.

PAPER caught up with the Bay Area legend on the set of her next music video, which will be announced soon, to talk about why she's "'bout to boss the fuck up." Read our interview, below, and check out exclusive behind-the-scenes photos from the video shoot.

In 2016, you released your debut mixtape, A Good Night in the Ghetto, and followed that with 2017's Before I Wake. After being independent, you signed to Interscope and never released an album. What happened?

When I signed a deal [with Interscope], it halted my career and it altered me consistently dropping music. It wasn't my decision to not put out music, I wasn't eligible.

This year, you independently released Got it Made on your own imprint, Grndwrk. What did you want to say with this new album?

That was me proving to everybody — and especially my old label — that I could put a body of work out fast, because my I technically couldn't put out my other album and I had another project with an artist I couldn't put out. Everybody felt like I needed them, and Got It Made was my "no I don't" moment. I created this body of work in less than a month and it came out, so it's like, "Bitches, this is what I'm born to do."

You're an Oakland native. What's your favorite late-night hang?

On some late-night shit, on some real ghetto shit, go to Waffle House. Those are only the places you go, for real. And to drink, man, where I be drinking at? [Pauses and smiles] In the car. I mean for real, car bar.

[Laughs] That the real shit, I been doing like 135 mph in that car. I need to slow down before I get a damn ticket. It doesn't help that I just moved to the beach and I am flying up the coast line, top down, see ya.

When you're driving alone, what's your favorite song to sing?

As of recently, I be listening to Roddy Ricch. I listen to a lot of oldies, so if you get in my car you gonna hear The S.O.S. Band, Shalamar, Patrice Rushen. The instrumentation makes me happy, plus the songs are like five or six minutes long. After listening to a few songs I'm usually where I need to get to, so it makes the drive go better.

You released a song and video for "Black Excellence." With everything happening in the world, what is the story behind that song — and especially its message for your younger fans?

"Black Excellence" was a record that was already made, and it just happened to become a moment because of George Floyd. It let people know I'm strong, I'm Black, I'm proud and I don't give a fuck. The message I have for little girls is stay confident, know your worth, don't fold, and just honor and respect your own people. Love your own tribe because that's the problem right now. There is a lot of division, so in order for us to become a unit together, we gotta first conquer our own race and love each other again. How do expect other people to love your people, when you don't love them?

We've heard that you choose not to engage with social media. Why is that?

I just want to be normal. We are at a place right now where people have to know you ate plums for breakfast. Why do you have to know I ate a plum for breakfast? If this was 1995 and you were reading Vibe, you wouldn't know that. You would have had to wait to see the BTS to see what someone was eating. I don't want every moment of my life to be documented because I'm still human. I want to have human experiences, so if someone just happens to document something and it goes viral, I'm cool with that. I just don't want to intentionally chase the moment.

What's next for Kamaiyah?

Shit, blowing up, superstar, mega-star status. I know it's happening, so I'm getting ready for it and embracing my calling. I'm 'bout to boss the fuck up.

Stream Got It Made by Kamaiyah, below.