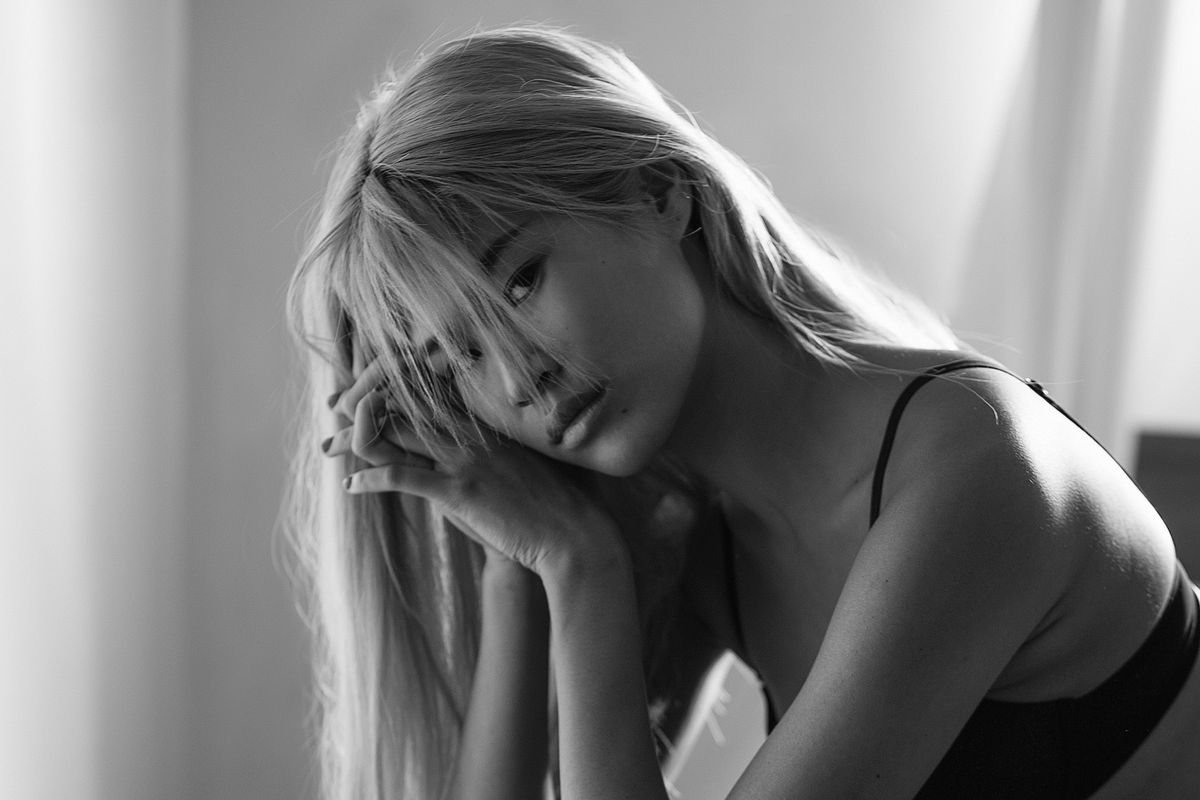 Justine Biticon Is a Model Citizen

Justine Biticon's spontaneous rise to fame is a story out of the movies. Against her parents' wishes, the then 17-year-old left home in Panorama City, California to compete on the reality series America's Next Top Model — only to be eliminated in the second episode. But rather than be defined by what would have ended many a career, Biticon pulled a complete 180, signing with Ford Models and landing a coveted campaign with Nike Women within a year.

While Biticon's streetwear-centric style and fiery smolder have become her unofficial modeling trademarks, it's her disarming, down-to-earth attitude that's allowed her notoriety to transcend lookbooks and runways. After her elimination, Biticon tweeted out selfies of herself in front of her crying face, going viral overnight. She's since amassed over a million combined followers on Instagram and Twitter, joining Internet™ darlings like Chrissy Teigen and Jaboukie Young-White to become a voice on of-the-moment issues like feminism, diversity, and mental health.

"Honestly, it's just me being me," Biticon says of her spirited Internet persona. "I've always been rebellious — my parents never even wanted me to go on [ANTM]. I didn't tell them until the day before and just kind of left. The social media personality just came naturally after. Even now, I don't really understand how it started. I haven't changed anything except that I'm more conscious of what I say since I want to be a better role model for youth."

Biticon is perhaps most vocal in her representation of Latinx and Asian communities — her mother is an immigrant from the Philippines, while her father is from Mexico — quick to clap back against harmful stereotypes and advocate for better representation of POC's in media and entertainment. The 20-year-old has also earned praise for defending other females of color in the industry and championing diversity in modeling.

In spite of everything she's achieved before being able to legally drink, Biticon says the crowning moment of 2018 has been her decision to independently host her upcoming Snow Daze ice-skating fundraiser for RAICES, the Refugee and Immigrant Center for Education and Legal Services. On December 22nd, Biticon will take over LA King's Valley Ice Center with special guests such as Kehlani to help provide legal services for immigrants in need.

"I was listening to my dad tell his story of crossing the border to find work and become a citizen," Biticon recalls. "I was thinking — what if he had needed help? What if you were an immigrant, supporting a family of eight and you couldn't pay for a lawyer? I want to be able to help the kids and people out there who can't afford legal services."

In advance of her fundraiser, PAPER sat down with Biticon to talk activism, self-care, and inclusivity within the industry.

How and when did you get your start in modeling?

I started when I was around 16. My friend from high school saw that I was really tall and said, "Oh, you should try modeling." I never thought I had the look or personality to be model, but people started reaching out and I was freelancing straight off the bat. Then, my best friend told me to go for America's Next Top Model to see if I could push my career even further.

Beyond modeling, you've become well-known for speaking on social issues on Twitter. Do you consider yourself a feminist, even an intersectional feminist?

I would definitely say I'm a feminist. I'm all for women. I'm pro-vagina. It wasn't always like that. Feminism still has a negative connotation for some people — even my mom, who came from the Philippines didn't know a lot about it and so I used to think it was stupid. When I grew older, I understood that feminism is all about pushing women to be stronger and more confident. I do think my feminism is more for women of color since I can only directly relate to Filipina and Latina women. Women of color are sexualized a lot more, especially Asians who are seen as docile, timid, and submissive. And Latinas are seen as brash and rude when we are really just strong, passionate, and caring.

"Women of color are sexualized a lot more, especially Asians who are seen as docile, timid, and submissive. And Latinas are seen as brash and rude when we are really just strong, passionate, and caring."

How does being biracial affect the way you approach modeling, and life in general?

I remember I hated being Filipina because of the self-internalized hate within our community. At the same time, I wasn't Mexican enough for the Latino community. So it was hard for me to accept both sides of my culture at the beginning. But now, both are a part of me and have made me the person I am today. I never used to see people who looked like me in modeling, so I felt like it was my turn to show the kids that you can be a person of color, and be dark, and succeed in the industry. Now, I can celebrate what my parents gave me and be as transparent as I am. I've learned to stop trying to be someone else.

Do you think the industry is where it needs to be when it comes to diversity?

I love that more diverse models are being promoted, but often times they tend to be white-passing. Of course, that doesn't take away from their culture and their achievement. I just think there needs to be a wider range of diversity when it comes to darker skin and flat noses — we should push beyond Americanized beauty standards. And no, the industry isn't exactly where it needs to be. Look at Miss Spain, who is the first transgender contestant in Miss Universe. That was long overdue. Even Victoria's Secret says they don't want to cast trans models because it isn't "consistent with the fantasy" — that's bullshit. I hope that brands using diversity to connect to people isn't just a passing trend, but that those changes stay forever.

You've also spoken out about mental health, and encouraged your young followers to be mindful of their own self-care. What do you think are the issues stressing our generation?

Part of it is just being young. You know when you don't really know what you're doing in life, and you're confused trying to fit in and change the world at the same time? We see people our age doing amazing things and it distracts us from what we're doing right now. I have to tell myself, "Chill out, you're 20 years old. You have so much time." It's also social media — yes, it's a great way to promote things and connect to people, but it's also a plague on our youth because the expectations are so much higher.

"I never used to see people who looked like me in modeling, so I felt like it was my turn to show the kids that you can be a person of color, and be dark, and succeed in the industry."

What else do you do to cope with stress and just stay sane?

I know it sounds cliché, but put the phone down! I sometimes put my phone on "Do Not Disturb" and go out and do things with friends. I've also been figure skating since I was little, so my close friends know I'm stressed out when I go ice skating.

It seems you're channeling at least some of that into your fundraiser for RAICES. How do you feel about the current political climate surrounding immigration, and the proposed border wall?

It's fucking stupid. America is made up of immigrants. We make up the workforce, we fuel America. It makes no sense to be anti-immigrant. And to waste billions of dollars on a border wall, when we could be directing that money to low-cost medical care for Americans? The whole thing is just ridiculous.

Where do you like to hang out in Los Angeles? Do you live at home?

I live at home with my mom, but I think I'm moving out towards the end of this month. I am starting to hate LA but there's this tea place, Clementine, in Century City that does a whole afternoon tea time and they give you those trays for the snacks. That's my favorite.

"I've never been able to do anything that helps people the way I'm helping people now. And that's the point of my career."

What was the defining moment for you in 2018?

A few months ago, I would probably say working with Nike. That was the peak of my life. But now I'd say my fundraiser would be the peak of my life. I got to plan the whole thing, be the main coordinator, and do everything from the beginning. I've never been able to do anything that helps people the way I'm helping people now. And that's the point of my career.

Any big hopes and dreams for 2019? Any brands or editorial publications you want to work on?

I really want to work with Balenciaga — it's my favorite brand. I also would love to work with Chanel and Dior. I've never done a magazine before. I think Flaunt and Wonderland would be cool, and PAPER of course.