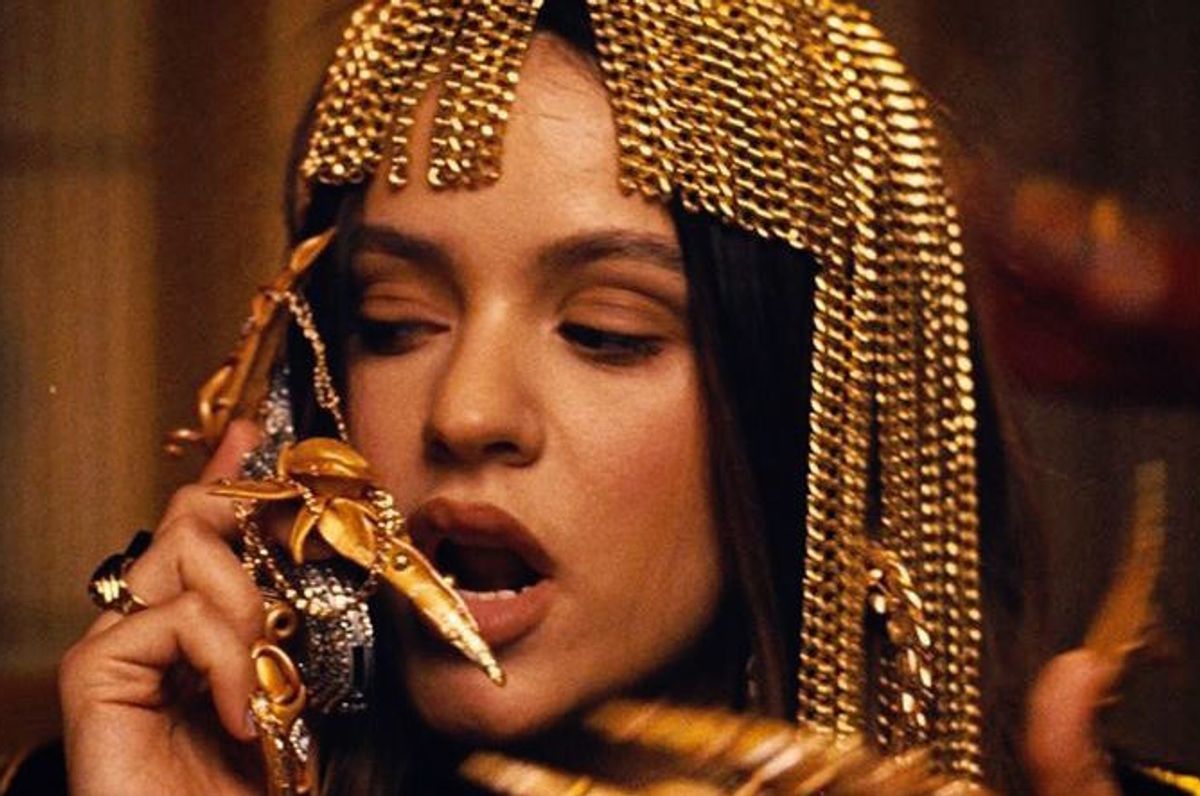 The Nail Artist Behind Rosalía's Gilded Claws in 'Aute Cuture'

Exactly one year to the day since international neo-flamenco sensation, Rosalía, snatched the world with her unforgettable lead single, "Malamente" from her debut LP, El Mal Querer, the tireless newcomer released the much-anticipated visual for her latest single, "Aute Cuture." In a video that's described as a "fantastical ode to femme empowerment, viewed through the lens of nail art," the performer is putting the classic elements of flamenco hand performance front and center.

In a teaser released last week, model Tzef Montana revealed the video's premise, saying the "perfect fucking nails" Rosalía and her posse of femme fatales sling in the desert town are "said to contain uncanny magic." The video is directed by Bradley & Pablo (the duo behind "Motorsport") and puts a campy, misspelled twist on the french phrase that translates to "high dressmaking." With a surreal "Tarantino vibe" that's playful and vicious, Rosalía and her beauty gang are seen slinging nail art and busting up bad guys like the Green Bros, or the "nasty business associates," the singer gashes in the face with her gilded claws.

As for the artist behind the tribute to the hard-hitting feminine appeal of nail art, the video's ornate nail sculptures are courtesy of Juan Alvear of Nails By Juan. The fine artist with a background in sculptures applied his deft ability to creating the over-the-top talons for the entire girl gang. Given the singer's colossal output of music and strong visuals over the past year, it's not surprising to hear the commitment Rosalía has to working with the absolute best to achieve her vision.

Juan Alvear told PAPER how his latest project came about and how he got into nail art.

As a kid I was always collecting and hoarding small objects. One of these things was nail polish. I loved the way it looked, the scale and how much variation there was — it felt magical. In middle school and high school I spent a lot of time painting and I figured I would make a painting using all of the lacquer I bought and continued to buy on clearance. I have a pretty extensive background in fine art — primarily painting, drawing and sculpture — and I majored in art at Cooper Union. One day I finally brought my hundreds of bottles planning to make a painting (finally) but instead started a finsta (@nailsbyjuan), which included the messily painted nails of my friends. Very quickly this hobby of painting nails merged with my sculpture practice, which felt like a match made in heaven.

Where does your inspiration come from? Do you have any other creative outlets?

I'm not entirely sure what drives me to create, but I feel the need [and have] an impulse to. Maybe similarly to how people like to play games, tell jokes, or eat. I feel like all three of these things are necessary in my life. I am currently working on a series of paintings and sculptures, which I'll be showing sometime in January (TBA). I've also been experimenting with making jewelry, which I'm really, really excited to share.

What was the concept behind the nail art in the "Aute Cuture" video?

If you look closely at the sets, they all have a unifying rose theme (Whether that be thorns, petals, vines or full on roses). I had the idea to unify them with the rose theme because of a few reasons. In the video the story implies that the group of girls were known for making nails that contained magic, and initially the idea was to imply that the nails gave you eternal life.

What's the significance of this theme in the video?

Because of this, Rosalía's nails are golden rose nails. In alchemy, the gilded rose is a symbol for completion of an important project — invocation of cosmic energy (since the goal of alchemy is to create gold from basic materials). The second reason being "Rosalía" means rose, which made me feel like the alchemy reference would fit perfectly. Her dancers and video cast were given nail variations consisting of rose iconography to show solidarity and harmony with Rosalía.

How was it collaborating with Rosalía?

It's always very rewarding working with people who are present in the moment and who care about their vision. It was great working with her and the team and I definitely hope to work with her again. I made sketches of the nails before making them to get an okay, and the rest is history.

How was this experience of working on the video? Any standout moments?

It was completely unreal to be in California in the middle of the desert surrounded by a village of people wearing otherworldly nails made by me, completely a vision come to life.