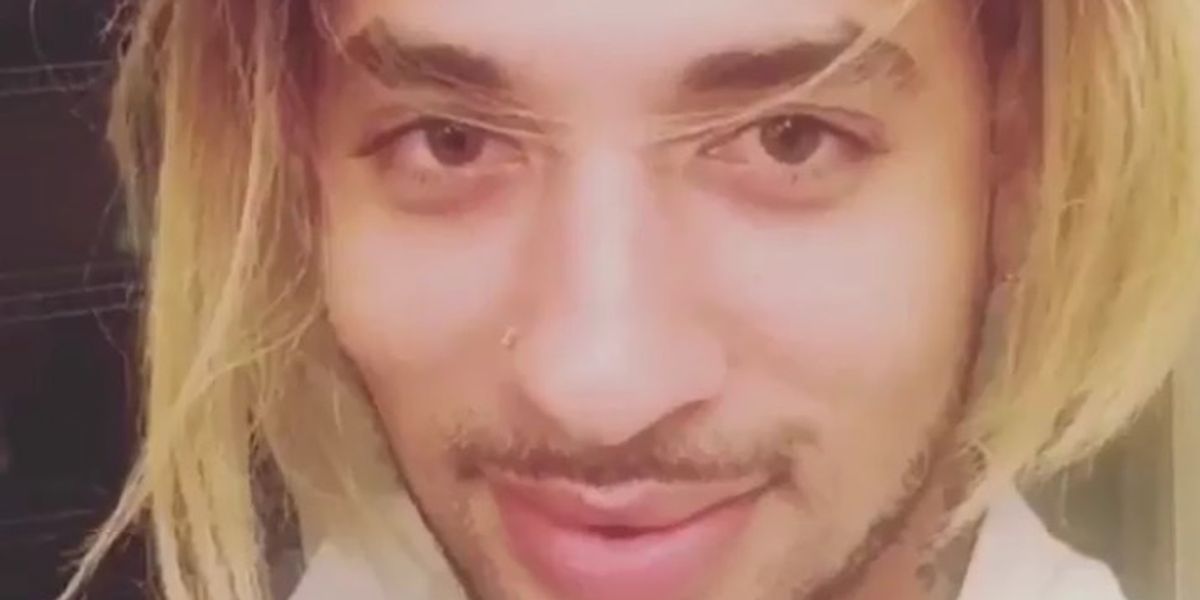 Joanne the Scammer is a slice of Internet divinity conceived by comedian Branden Miller, of Miami, Florida.

His muse, who tweets under the name @JoannePrada, is a gorgeously exaggerated meshing of meme culture and the darkness of the deep web and Craigslist with elements of gender fluidity, hip-hop and the ball scene tossed in -- all working in tandem to create a supernaturally confident character who makes a living scamming.

Scamming what, exactly? We're not sure. There's frequent, vague talk of fraud deception, and extortion that range from credit card and identity theft, to more small-potatoes shakedowns involving eBay, low-budget electronics, even Subway; Joanne the Scammer never really clarifies what her scams actually are, and that's the genius of it.

Caught me in the middle of a fucking scam.. Smfh pic.twitter.com/WRy4iq8GuZ
— Joanne The Scammer (@joanneprada) January 2, 2016

Joanne's Twitter account—featuring funny videos and written mini-tales—catalog her daily, jaw-dropping misadventures. Not surprisingly, Joanne has attained a bona fide cult following, with praise from all corners of the Internet, including celebrities like Solange Knowles and Amber Rose.

Guys I won't be tweeting for a while after this. I have to dispose this new iPhone 6 I just stole. I'm gagging. pic.twitter.com/dzB0Qob9p4
— Joanne The Scammer (@joanneprada) March 23, 2016

Miller's Joanne character is an anti-hero who both personifies this exact moment in the Internet's dominion—where slick social media stars have a veneer of perfection; the "Click the link in bio!" industry.

Meanwhile, Joanne, with her messy lo-fi, guerrilla-style approach, is the antithesis of that oppressive sheen, while besting it entirely.

More than anything, Joanne the Scammer is the savior our validation-addicted, social media selves have been waiting for.

We caught up with Branden to talk the origins of Joanne, and where he sees the beloved swindler heading.


How did the character of Joanne the Scammer start?

From a character named Miss Prada, which I'd been doing for a while now, but didn't really know how to develop. She was a prostitute, at first. And at first, I was trying to do like that Media Take Out-type of humor, and honestly, it was depressing. So I set out to do something more natural, and more me; something that's actually funny. Joanne just kind of evolved.

When did the scamming element get introduced?


I came to a point where I thought 'I don't give a shit anymore.' So I picked up my phone and it happened -- the "scammer" part just came out of nowhere. I didn't think people would even like it, because it's really dark.

It's dark, but there's clearly something resonating with everyone who follows you.

I always expected there to be an audience it, but I never anticipated that it would be picked up so easily, and by so many; people relate to Joanne.

Because she's a mess. I don't want to look perfect.


How do you come up with these videos? Are they spur of the moment, or planned out?

There's a formula to Joanne the Scammer stuff; I plan it all out.

In terms of the "scamming," I wonder if we even know what exactly she's scamming, or if it's just scamming in general.

It's just scamming in general…I'm not going to say! If you leave the question of "what," it's funnier.

Joanne's allusions to sex work via the Internet, a recurring and poignant plot point, are probably exposing that concept to a lot of people who'd never knew about it. Was that ever your intention?

And Joanne feels like an anti-hero; doing things people aren't brave enough to do.

Exactly; people get to live vicariously through her.

Would you say the character is a response to the constant need for validation on social media?

People are so self-absorbed on social media; they want to feel famous. At the end of the day, I don't want this fame for myself. I don't act like Joanne in my daily life. I don't live like that. I dress like a boy, I look like a boy; I have a full-on beard. But I also don't care what you think about me. So, I don't want that validation; I just want to be a fucking mess.

Have you ever encountered a scammer in real life?

Totally. Not every day, but a lot. I'll say that. They're out there.

I don't think any are as interesting as Joanne.

It's funny to laugh at, but it's not funny when it's happens! That's the one thing I will say about the character. The people following are like, "We like you, but bitch, don't ever come over to my house." I could never create a GoFundMe account.

So you think a lot of people aren't sure if it's real or not?

I love that people question if it's real. In my head, my Twitter's like a movie. I want to take you guys on a journey of this life of Joanne, and you know, I can't do it through YouTube, and I don't have my own TV show; I use Twitter as my outlet.

Do you ever perform or make appearances in the Joanne character?

The only time I've performed was at a Miami venue's opening, but other than that I don't. I go back and forth about it, but I feel like I'm more of a comedian -- I don't want to be a drag queen.

Do you have TV or movie goals for Joanne?

I think the character is larger than life; I'm not just saying that. I think whatever she gets, she can tackle, because she just is this personality that's stronger than most people you'd come across; I feel like the sky's the limit.

Especially now, with all the celebrities taking notice, have you been approached for TV or movie projects?

But don't you think Joanne should be the one who grabs us by the wrists and tells us how it is?

If they put me on TV, I would do something that no one's done before. I've studied pop culture; I know a lot about all this stuff. But more importantly, I don't care; I'm a mess. I admit my flaws. I'm an every day American; I'm struggling, and people can relate. If Joanne the Scammer is a huge "movement," it's because it's relatable.

Related: Amazing Women To Follow On the Internet In 2016 (And Always)