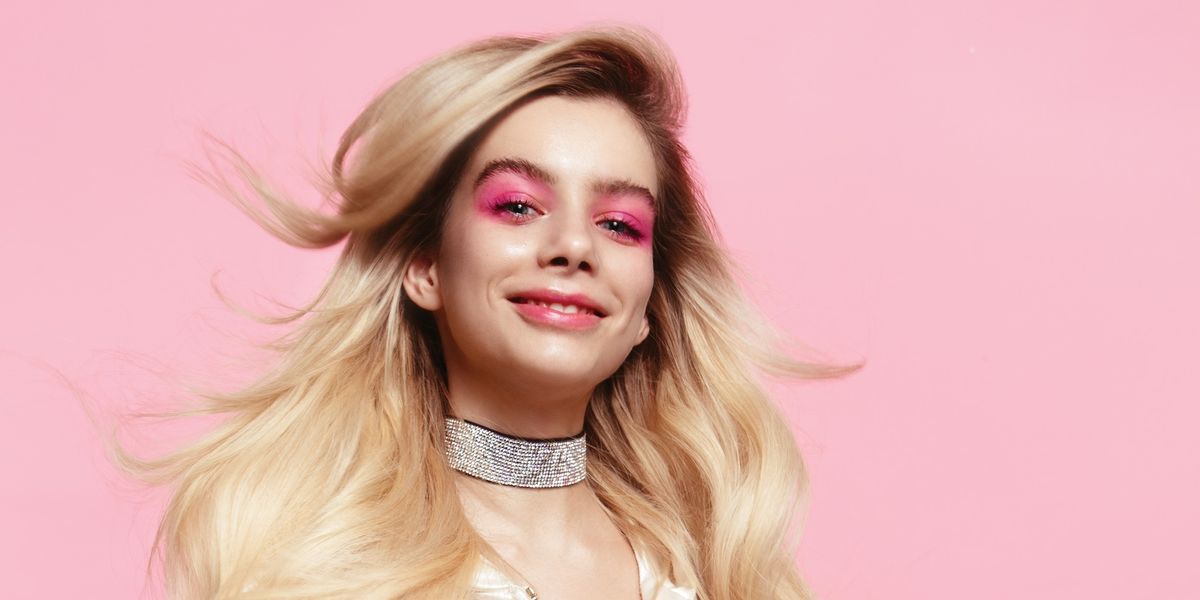 Polish model and up-and-coming DJ Joanna Kuchta has amassed more than one million followers on Instagram who can't get enough of her blonde Barbie locks and '90s model off-duty wardrobe. The cyber It Girl turned to the Internet after relocating from her native Gdansk to rural Ireland at 13 and finding she had little in common with her new classmates. "I didn't have many friends and was considered a bit of an outsider," she recalls. "Then I went online and found people who liked the same things as me, and I started posting pictures."

Now signed to Models 1 and going back and forth between London and Dublin, where she's enrolled in university, the 20-year-old has become a pint-sized beacon of positivity on the 'gram. Kuchta champions a Good Vibes Only mantra: "Girls should be proud of who they are. I only support body confidence."

I am originally from Poland. When I was 13, I moved from Poland to a really small town in Ireland called Donegal. My family moved for work and I didn't know any English when I arrived. I read a lot of books and would write in the words I didn't know in Polish; I would then reread the chapter until I learned the words, which is how I learned English.

I have always liked fashion; I used to want to be a model or work in the entertainment industry, so when I moved to a town with only 2000 people I worried there was nothing for me to do. Everybody was into sports and nobody dressed like me or knew what I was talking about, so I went on the Internet and found inspiration for fashion there. I set up a Tumblr and started making friends online with people who shared my interests.

I had Tumblr and Twitter and when I turned 18 I got my first iPhone. I always took my own photos, but I took them on a camera and then uploaded them to my computer, so it was a much longer process. When I finally got an iPhone it became much quicker and I could just take photos of my outfits, with my boyfriend at the time, and quickly post them online. At first I would just post these on Twitter and I began getting a lot of retweets. When I launched my Instagram account, I put my new handle in my Twitter bio and people started following me. I have always enjoyed making my photos fit together nicely and showing off my outfits and having a theme.

Was there a moment when you realized how popular you were becoming online?

I didn't ever really think of it like that, I have always just really enjoyed doing it. I have always thought, I'm doing it for me and that's nice that other people like it too. I have never properly used hashtags. I have always used Twitter to share my thoughts and interact with my followers because I think that is important, whereas Instagram is more like a visual diary. Together, they show me as a real person, as opposed to just some Instagram girl. I also use Snapchat to show my day-to-day life.

Has social media made you more confident?

Yes, definitely. I didn't have many friends in school and was considered a bit of an outsider or a weirdo. Then I went online and found people who were interested in the same things as me, and I didn't feel so much like a loser. When I started posting pictures and people began commenting with really nice things, it felt like I was doing something right. A lot of people comment that I am very body positive, and it encourages them to love their own bodies, and I think that is great; I don't want people to feel bad about themselves.

Do you use social media to discuss any issues you are passionate about?

I use Instagram mainly for pictures but on Twitter I try to speak up as much as I can about issues I feel strongly about, like Black Lives Matter. I have 180,000 followers so I like to offer exposure to things when I can, especially as a lot of my followers are young people.

I have always spoken a lot about body positivity. I would post pictures that are a little bit on the revealing side and people would give me a lot of hate, saying, “Oh you're such a hoe, you're a slut for posting that." They didn't get that I was posting the picture as a positive thing, because girls should feel proud of their bodies; I definitely wasn't looking for the wrong kind of attention. 70% of my followers are female, so I don't think boys are even that interested.

Have you received any other negative feedback?

I don't normally wear bras because I don't really need to and at the beginning, when the Free the Nipple campaign was quite new, I got quite a lot of hate from people who could see that I wasn't wearing a bra.

Do people ever ask you for advice?

Yes, I get a lot of private DMs on Instagram from girls asking for all sorts of advice, including relationship advice and I try to spend as much time as I can answering each message. People who have been following me for a long time know that I am from a small town, I go to university, I was in a long-term relationship and went through a break-up, and people relate to these issues.

I try to be positive on social media, as people look up to you and it is unhealthy to be negative. If you post about being unhappy, it will just make you more unhappy. If somebody asks me a question though, I will be honest.

For a while I was very pink and baby-girl; it became my thing and I wasn't sure how to break out of it. Right now, I'm trying a few things but I'd probably say I'm a little bit emo, but still a bit pink, and I'm really into funny slogan T-shirts. I would say my style is quite chill.

Who or what inspires your style?

I like a lot of different styles in fashion and like to experiment with these in my own wardrobe. I follow about 900 people on Instagram so there is no one person that I love, but I am constantly inspired. If I see somebody in the street and I like what they are wearing, I'll approach them and let them know, and I am also inspired by film and music.

I like a lot of old, eighties music. My favorite song is “This Must be the Place" by Talking Heads, I listen to it every single day. I play guitar so I like bands a lot: The Pixies, The Sex Pistols. I also like proper techno music, like you hear in Berghain in Berlin, and I am also starting to DJ. I want to mix old classics with house music and disco – I love disco too.

I love Berlin. When I visited, I made sure I went to every club; I love Berghain and I also like Tresor and Prince Charles. I love the style, everyone is so chill. It's really European and it reminds me of Poland a lot.

Do you have a Polish fan-base?

I have a lot of Polish followers and a lot of people comment in Polish. I always go back to Poland in the summer and I am really proud to be Polish. Poland has an amazing fashion industry and there are some really cool up-and-coming brands. One of my favorite Polish brands is MISBHV, which presented at New York Fashion Week last year. There are a lot of great Polish exports right now.

One of my favorite brands is UNIF, which is vintage-inspired. Right now, I am wearing Oh My TEE, which always makes really funny T-shirts that I love and I really like Acne too.

Have you ever had a part-time job?

I worked in a vintage shop in Dublin and I am still really good friends with the people there, and I still work there sometimes. I love working in a shop because I love talking to people. When somebody is nice to you, it makes your day a little bit better.

Have you made a lot of friends on Instagram?

Yes, I met all my good friends online. I might have known them for four, five years and finally met them when I came to London. It's harder to meet people at events as people have their guard up, but online people are much more chill and comfortable.

What other hobbies do you have?

I love reading, because that's how I learned English. I like taking pictures, I love music and fashion obviously, and I like cooking. I'm not a sporty person.

Do people online often ask about your diet?

A lot of people do ask me about my diet and measurements, but I never give them out as I don't think it's promoting a healthy lifestyle at all. In terms of diet, anything goes. I'm naturally slim, probably because I am young too.

What advice would you offer other young girls hoping to make it big on Instagram?

Be yourself. That would be my advice for anything, not just Instagram.

On Joanna: Shorts and jacket by Tommy Hilfiger, bag by MCM, pins and stickers on bag by Skinny Dip