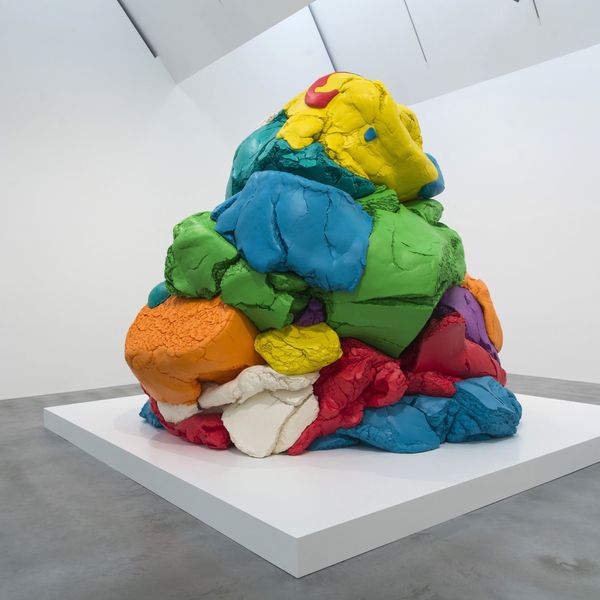 Jeff Koons Play-Doh Sculpture Selling For Up to $20 Million

Controversial art darling and recent Louis Vuitton collaborator, Jeff Koons is back with more antics. On May 17th, Koons' nostalgia-laced construction Play-Doh will go on sale at Christie's evening sale. Part of the "Celebration" series, this is the first time a version of the project has entered the market.

Standing at 14 feet tall, Play-Doh isn't actually made of the childhood-favorite namesake. Starting with plastic molding, Koons' team created giant pieces of painted aluminum that aren't held together by an adhesive at all. Each piece in the structure is perfectly fitted together. The cracks on the surface were also created through technology, which in itself was a challenge.

"It took years for Jeff to get to a point where he felt like the original sculpture was finished," Andrew Pharmer told Artnet. "The cracks really have to be done by hand and by eye — that's part of what took so long. It's really as tedious as you can imagine."

While many critics see Koons as a revolutionary in the art scene, criticism is rampant, as well. For example when he showed his huge balloon dog in Versailles, French media wasn't having it.

The president of the Foundation du Patrimoine heritage group, Edouard de Royere commented, "I have nothing against contemporary art but I am shocked by this intrusion into a magical place like Versailles." The president of the Union National des Ecrivains de France, Arnaud-Aaron Upinsky also said that the piece would "soil the most sacred of all symbols of our heritage and identity."

Despite all of this, Koons doesn't seem to care.

His 10 feet tall sculpture, Balloon Dog sold for $58 million in 2013. And if history repeats itself, Koons will be $20 million richer next month.