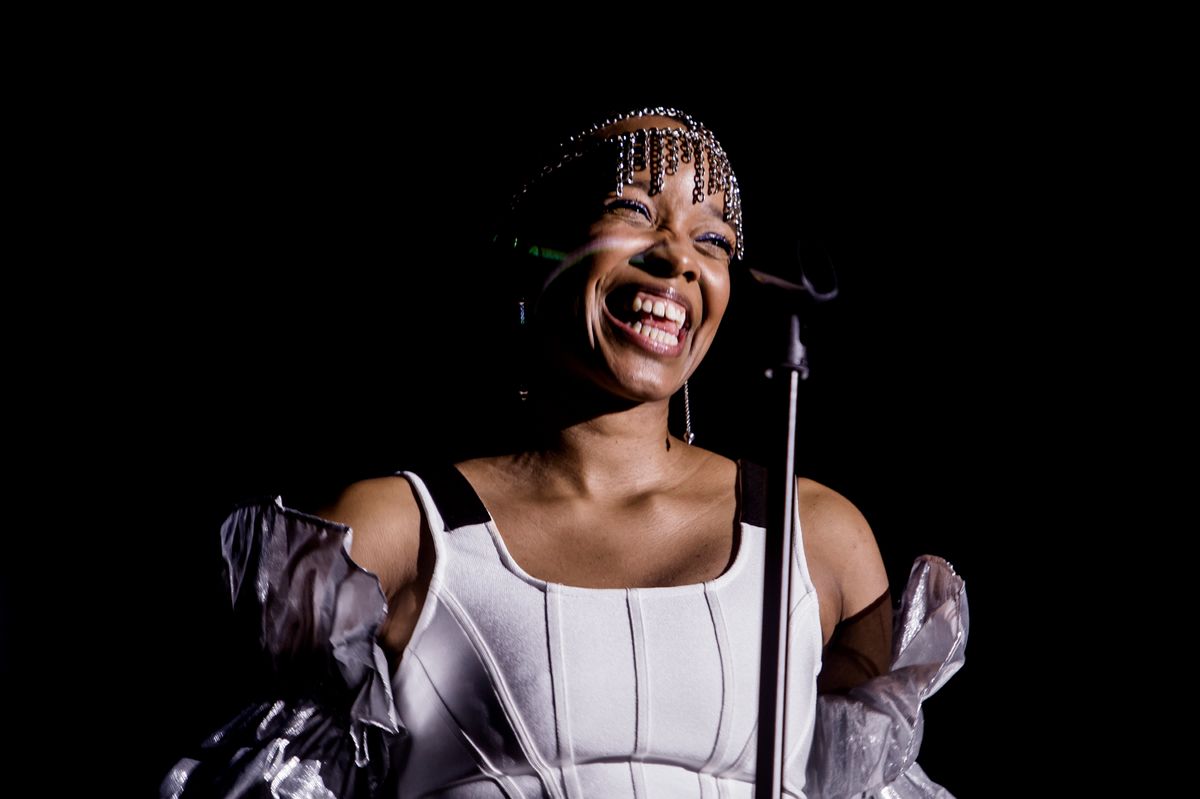 This is fitting, as Legacy! Legacy! draws on the name recognition, strength, and legacies of historical, cross-disciplinary Black figures to create personalized songs that apply to multitudinous Black experience. Though she's become more well-known for her music, which fuses experimental Black jazz with modern soul and hip-hop, Woods works to this day as an educator in her hometown, teaching poetry and literature to the next generation of Chicago youth at Young Chicago Authors.

She understands and undertakes the labor of drawing audiences into her complex messaging, which addresses systemic oppression and other social ills through the multidimensional lens of Black self-love and autonomy. Her songs fuse jazz and modern R&B touchstones, but Woods communicates that there are innumerable ways for Black people to love themselves. In the show, she explained this belief was internalized for her through a Zora Neale Hurston essay called "How It Feels to Be Colored Me."

As if to illustrate the endless and numerous facets of Blackness in real time, Woods staged her Red Bull performance in the round. Her five-piece band and three backing vocalists surrounded Woods in the center. Visual projections by VAM Studio were similarly organized above the stage, showing archival videos of Jean-Michel Basquiat avoiding an interviewer's probe on what makes him angry, and Eartha Kitt laughing wildly at the idea of compromising herself for the love and validation of a male. These served as introductions and inspirations for Woods' music.

On every side was the audience, viewing Woods from every possible angle, as she changed mid-show from an architectural dress with ruffled sleeves into a sheer, multi-fabric du-rag with a long train trailing behind her. Onlookers screamed "go off, Jam!" when she transitioned between songs.

Dancers Chatal' Ashante Hill of Hiplet and Po'Chop delivered fluid choreography to on-screen interludes of Nikki Giovanni performing "Ego Trippin" and that aforementioned Kitt video. Guest performers Jasminfire and theMIND accompanied Woods during "Sun Ra." Nico Segal helped close out the show on Woods' "Baldwin," a powerful thesis that works to sum up Woods' purpose in staging her album in such intimate fashion: "You don't know a thing about our story, tell it wrong all the time," she sings.

And poet Danez Smith brought down the house with a reading of "Dear White America," a raw and visceral response to ongoing state-sanctioned violence against Black people. PAPER caught up with Woods during rehearsals for Unfolded. She talks about her teachers, what she encourages in her students, and why all Black stories matter.

Since Legacy Legacy! is based on heroes and teachers of yours, what are you hoping to show with Unfolded?

I love playing with my band and they're all amazing. Our shows are really high energy, so I wanted to tailor it back a little so the music and inspirations shined through equally. I'll be able to show a lot of the videos, interviews of some of the people talking that help me write the songs, and describing the experience of making each song — almost like MTV Unplugged. Then, of course, I have special guests and performers, all help bringing to life the ideas, writings, and teachings of the folks I drew from to make this record.

What made you decide to focus on these figures, from Zora Neale Hurston to James Baldwin, when making this project?

After making my first album [2017's HEAVN], I was feeling stuck. I think people will feel this way about this sophomore album a lot. So I was just giving myself a lot of writing prompts and one of them was to try to write a song version of Nikki Giovanni's poem "Ego-Tripping." That was the first thing I did, and that started a pattern of naming songs after people that have influenced me — teachers — and figuring out 13 different ways of approaching each one. What all these figures have in common is this unapologetic energy of owning who they are. I was trying to manifest that energy in myself, particularly, as a more introverted person and a Black woman trying to navigate this industry. Even my manager one time said, "You're the boss of all of us, you have to tell us what to do." I wanted to manifest some of that assertiveness through this project. Singing those songs gives me that power. I'm trying to collect different energies that I've needed for myself.

Through this project I realized that I do love history. Of course my ancestors are connected to history, but in school, my understanding of history was similar to the way I didn't know I loved poetry, until I found these spaces of people of color teaching people of color. I think that it's a crime that I didn't learn about Zora Neale Hurston in high school or anything like that — that I didn't learn about Baldwin until college.

The album definitely presents a range of influences. I'm sure you have more than 13 heroes you look to for guidance. How did you narrow it down?

I definitely had a longer list of people who I was trying to write about. Toni Morrison was on the list, and she was still living when I was thinking about it, but that was almost too much. I couldn't even think of how to put the effect Toni has had on me into a song. So I had to give myself permission to be like, "You don't have to put them all into this, there's different ways they'll all show up." Like, there's Pat Parker and Lucille Clifton, Audre Lorde. But I just tried not to force it and be in the moment.

I also was thinking about the balance. The album is frontloaded with femme energy, which I thought was important. None of these people I wanted to put on pedestals as if to say they were perfect people — for instance, including Miles Davis, who is an amazing artist but has a very complicated personal history. But I wanted to mostly center women who inspired me and how I think about womanhood. My mentality was almost like, "If we're going to have these people in the room, Betty is going to speak first, and Miles is going to wait." [Laughs]

Who were some early mentors or influences who really taught you what you know now?

Definitely Avery R. Young, a poet and musician. He's one of my first poetry mentors. He taught me the importance of connecting into what it is that you wrote and not just performing, but allowing yourself to feel it in a way that's safe. In spoken word poetry, there are a lot of young people who get coached to improperly showcase their trauma onstage. Avery taught me how to find a safe, healthy way to connect with the emotion behind what I write every time you perform it. Also him and Krista Franklin, a collage artist and poet, who showed me that you don't have to choose one thing to focus on. You can be a poet, you can be a musician, you can be an artist. You can do it all.

Looking back, is there a moment from your childhood or in your artistic process that has encouraged you to showcase your own complexity?

Being an artist helped that a lot, because I encounter similar minds in this field. Early on, I went through navigating school environments that would try to put people in boxes. Artistic people are always considered the weird people, but in my eyes, they are the coolest. I specifically think about reading Zora Neale Hurston as a moment that helped me realize that identity is expansive. She was writing about how she learned about her Blackness when she was Black in school, surrounded by white people all the time and felt othered, but then she also learned about her Blackness when she was surrounded by her people. They all laughed the same, and they would all listen to this music together. I grew up in Beverly [on Chicago's South Side], and in white circles, there was all this code-switching, and always feeling like I had to be the "right kind" of Black. My work has been to realize that I simply am. I don't even know what that means because I'm still discovering it, and so no one else can possibly tell me what that means because it's still evolving.

As a teacher yourself, what's something you try to impress upon your students?

It can feel like a big pressure to figure out your voice, especially when you're just starting as an artist. So I always encourage students to figure out what they like and why they like it — to not be ashamed of their inspirations or influences, and to try to not have this pressure to be all original when really that's wrong because we're all made up of so many things. I might tell a student to read this book of poems, and find their favorite one, then try to write their version of it and just cite that author, because they were inspired by them. I also try to pass on the idea that one doesn't have to figure out all the things that they are right now. You can decide you're also a photographer tomorrow. And that's not going to fight your poet self; it's going to make your poet self stronger.

What do you think of the moment we're in now, where it seems Black art is more visible in its many dimensions and mainstream spaces than it has been in quite some time. In other words, Black stories and art seem to be taking up more deserved space in a way that challenges non-Black people to notice.

It's definitely exciting. Right now, off the top of my head I think about so many different presentations of Black queerness or Black femininity. When I was younger, maybe there was the one person. And so I think that I can definitely see the impact it has, especially working with young people, on them sooner feeling permission to express themselves any way that they choose. I also think there's always a flip side in thinking about how tokens can always be made from invisibility. I feel like it's important that there's not only visible representation, but the people who are controlling the narrative, or the people who are producing the interviews, or producing the segments are also the Black women or the queer people, too, because that's just as important — that we also get to tell our own stories how we want to tell them.