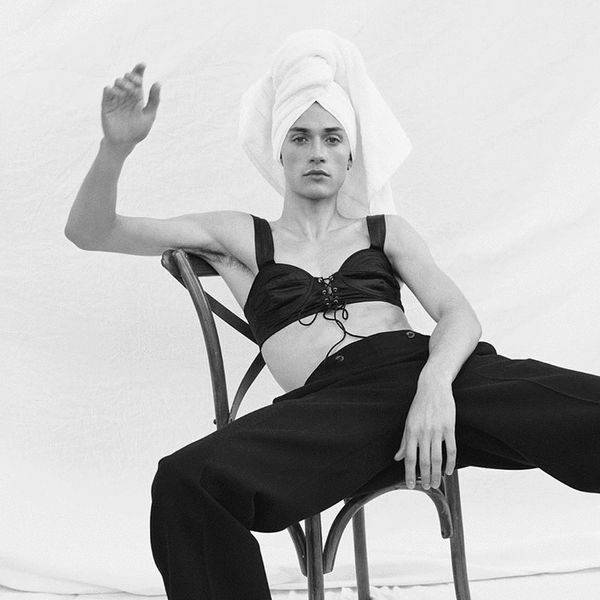 Helming his eponymous fashion line for almost 50 years now, Jean Paul Gaultier is nothing if not iconic. He's responsible for some major statements like the often-imitated cone bra for Madonna's Blond Ambition tour in 1990 to releasing the ever-enduring "Le Male" fragrance in 1995 with Gaultier's trademark sailor stripes on the male torso-shaped bottle.

The classic fragrance was created by perfumer Francis Kurkdjian and was designed to invoke the smell of a man's clean sweat crossed with some heavy lavender notes that reminded the designer of a '50s barber shop. Producing some very iconic images throughout the year of his sexy sailors, this year's Pride campaign with Jacob Bixenman turns "Le Male" into a 21st century advocate for equal rights and commemorates the Stonewall Inn on a t-shirt.

Bixenman feels the full fantasy, posing with a rainbow can containing the fragrance and wearing a sailor hat with pants undone on a rooftop or lounging about in a corset bra with hair wrapped in a towel. Beyond lending his classic good looks and flair to the campaign, the model understands the scope of this honor writing, "Really insane to be included in the legacy of a brand and fragrance that's contributed so much to the imagination of queer imagery in fashion/advertising. And the corset bra! It's all too cool."

Get into these #jpglovespride pictures, below: