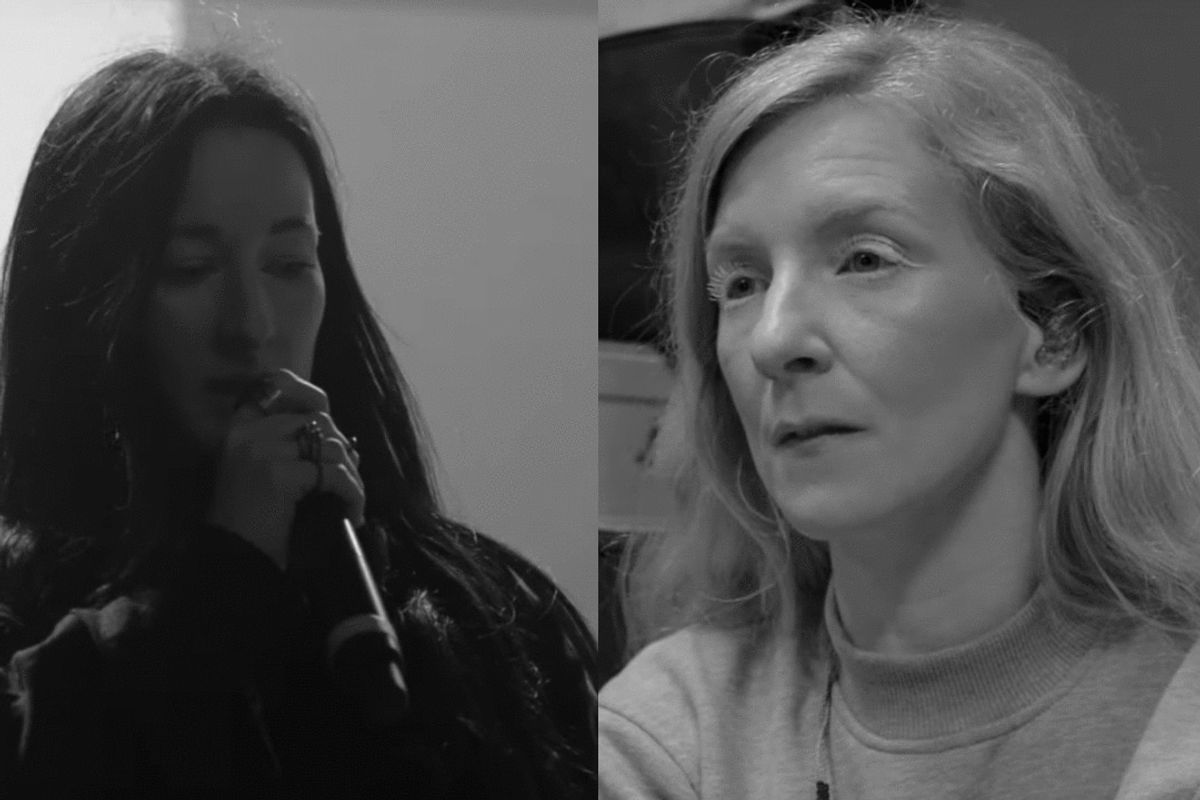 How Zola Jesus and ionnalee Made 'MATTERS'

When ionnalee and Zola Jesus came together to make "MATTERS," they created a song clocking in at more than 6 minutes long. But they produced something much bigger: a soundscape where both of their bodies of work, however far off from the norm they might be, can exist and interact.

Both ionnalee and Zola Jesus have, in the past, had their tracks reduced to ominous alt-Halloween, dark-pop cuts, when in reality they're creating much more solid works than many of their alt counterparts. Having found similarities in their tracks and processes, ionnalee first reached out to Zola Jesus in hopes of having her be involved with her 2019 album, Remember the Future. "MATTERS" eventually made the cut, and the two documented their first performance of the track in Los Angeles for the official video.

PAPER put the pair in conversation to find out more about how the two legends decided to come together and collaborate on something equally dark and hopeful. Below, ionnalee and Zola Jesus delve into their relationship with each others' music, performance rituals, and favorite parts of making "MATTERS."

How did you become aware of each other's work?

Zola Jesus: I have been aware of [ionnalee's] work probably since 2009 or 2010. I remember seeing these little clips and videos on YouTube, and they're getting passed around, and everyone was trying to figure out who this was. Who is this great beauty? "Is this Christina Aguilera?" People didn't know. Everything was so fully formed, it just felt so magical. These little pieces dropping on the internet, and from then on I've been a fan and following her work.

ionnalee: That's really sweet. The first time I heard your voice was in the intro of M83 Hurry Up, We're Dreaming, I think. And then I heard "Dangerous Days." That was in a playlist, and I think that must have been like 2013 or 2014? I really loved that song, and I started to listen to your stuff. We both come from sort of a classical singing background, at least as far as I know, but that really appealed to me. The depths of your voice — there's a world around your music which is really appealing to me.

Do you feel like your approaches to that world-building within your music are pretty similar?

Zola Jesus: I think we're probably pretty similar. I mean we're both very — I don't want to say control freaks, but I guess that's the better word for it. We're both steering our own ships. We have to see it and then we make them happen. That's something that I really respected, and was really excited to discover in [ionalee's] work, that she's really at the front of it all. She's making her own costumes, and she's making the music videos. It's such a good DIY process. Same over here, we're just both trying to make our vision a reality.

ionnalee: There's the voice, the songwriting and the production, and how you use your voice as an instrument. But also you're super vocal and you're steering your ship. Before we even messaged there weren't many words said, but I think from what I knew, and the impressions I got through your work, I knew we would have a good connection somehow. That has been amazing to me.

Zola Jesus: It was an easy, intuitive process. I feel like as soon as I met you, I felt this instant comfort. We're on the same page in terms of personalities, how we express our creativity and things like that.

How long was that time after the initial point of contact when you actually got to meet, and what we see in the video?

ionnalee: Maybe eight months or something? Six months? Do you know?

ionnalee: From saying hello and admiring each other's work, and then I got to ask Zola to be a part of the album, and then we were sending files back and forth. Also, it wasn't just one of those collaborations that's done in one day either, it's something we worked on for a while. From that, it was technically three or four months and then we could meet! I was happy you wanted to come to LA.

Zola Jesus: Yeah, it was fun!

The video for "MATTERS" is beautiful, the story within the video of meeting on stage and seeing everyone light up. Was that the point of the video, to highlight this collaboration and how the stars aligned?

ionnalee: We have this documentary footage I told you we were going to shoot whilst you were there. We were doing soundcheck and everything, but there wasn't the plan to meet and make a video about it. But the whole moment was really special because we had this position, and obviously the song itself tells the story of how we met. We weren't allowed to film high quality in that venue, which was a little bit of bummer for me. Just having footage from the fans, because they sometimes provided footage of us actually performing the song live or it's our own footage. Being able to capture the surrealism really, because I didn't know what to expect from you as a performer live. Obviously you see things online, but that's different. That was a real, intense thing that I felt off of you and I think you can get that from this video.

Do you have similar pre-performance rituals, or very specific aspects of your performances that you feel are integral?

Zola Jesus: I think we're pretty similar. I was a part of your world, but after that night, I guess I had a better idea of knowing what was similar and what wasn't. I would say we're very similar, just in terms of how we get ready, also how we let a show revolve around the crowd and everything. I did learn a couple of things from [ionnalee]; she gave me some tips. I felt like I learned from you, watching you perform. Sometimes I think I get a little too lost in the music downstage, but I feel like you have the ability to get lost in the music and also harness the control of the performance. I really admire that, so I took that with me.

ionnalee: It felt like that moment was really long and at the same time, we get off stage, it was like "What?" I wanted to do more of it and make it longer, this collaboration. One, because obviously one song took so many hours of travel for you, and also that was the end of the tour! I think I would love to see you perform and be part of the scene, and just get a glimpse of how you are behind the stage and on stage, when you're in Europe and controlling your performance. I owe you one, you know.

You said the moment felt long, but the song itself is a pretty lengthy soundscape. What was producing "MATTERS" like?

ionnalee: When we recorded it, it was more of a traditional arrangement. The song was written in a weird way. Then you added so much interesting stuff to work with, from the shouting part to the humming part that we built, they just had to fit, get their own space. Eventually, we added the second verse to the end and it grew longer and longer. It didn't feel full speed, because sometimes I feel like, "Oh, why is this song 10 minutes if it's not a natural sort of progression?"

Zola Jesus: I love the song.

What have your past years have been like creatively? Are you working on anything new?

Zola Jesus: I've certainly been working on my next record. I'm in the writing process. It's been a real creative journey, a lot of ups and downs. Working on the track with [ionalee], she hit me up with it while I was working on my own stuff. So it was really interesting to be able to put myself into a different world for a minute, and I really was inspired by the feeling of being part of such an atmosphere. That made me excited to rekindle, reconnect with the atmosphere within myself creatively. I've just been writing, and [ionalee] and I talked about that if it was up to us, we would go to northern Sweden and film a 30 minute music video, or a whole visual album together. That would be awesome. We're definitely going to continue working together in some capacity, it's just about when and how.