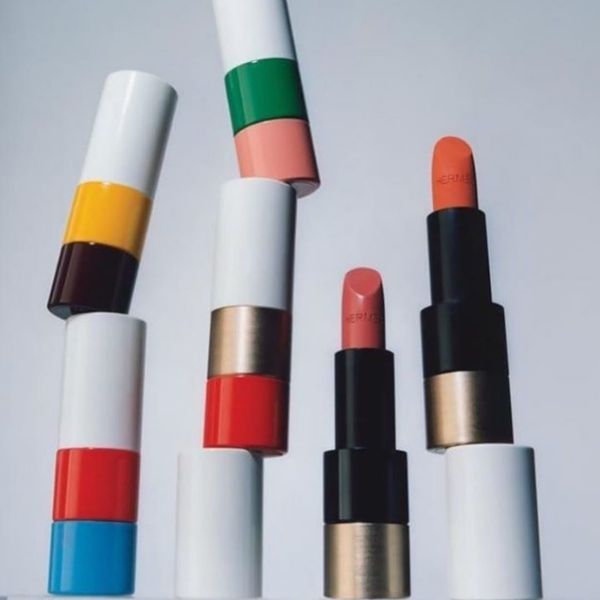 For the first time in 183 years, French luxury brand Hermès is launching its own makeup. Its historic first product launch? A line of lipsticks called Rouge Hermès — resurrecting the same name it used for the brand's perfume collection in 2000.

Paying homage to Hermès' luxe heritage products, the texture of the lipsticks will reportedly emulate the bag's soft leather, while the satin finish will celebrate the silk scarves. The lipsticks will come in 24 different shades along with two different finishes — matte in addition to the signature satin.

Crafted using natural ingredients — like beeswax and white mulberry extract — at Hermès' laboratory in Normandy, the colors range from a deep purple and neutral rose to a true red and a bright orange.

According to the Wall Street Journal, the lipstick has been two years in the making and was carefully crafted to include a delicate custom scent and refillable packaging designed by Pierre Hardy, creative director of jewelry and shoes. "We wanted to do refillable so we could use more luxurious materials that had their own value," Hardy told WSJ. "The idea is a form that's both simple and playful enough to allow it to be done and redone ad infinitum. It's rare for an artistic director to think about packaging over a long period of time and not just a one-off. "

Related | The Internet Is Upset With North West's $10K Birkin

Although the brand did not reveal if it'll be dropping any other products, it's supposedly a part of its larger expansion into cosmetics, that will eventually span into skincare. Fans can expect to see a new category including foundations and blushes in the next six months.

The Parisian label's ascent into cosmetics, echoes a recent pattern within the luxury fashion industry where several brands such as Burberry and Gucci have also launched their own beauty products. With beauty now a $532 billion industry, it's no surprise that everyone wants a piece of the action.

The Rouge Hermès lipstick is priced at $67, while a refill will cost $42. The collection is set to launch in March.