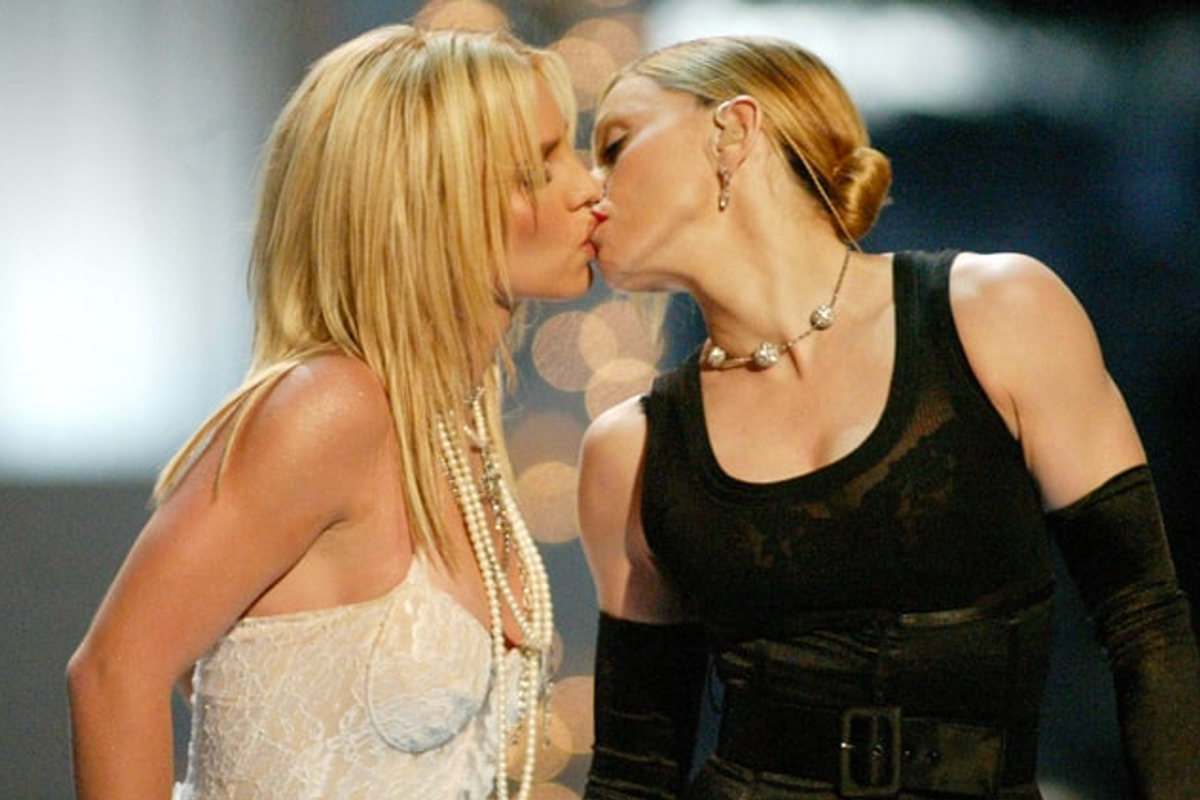 Here Are the Most Iconic VMA Moments of This Millennium

MTV's VMAs is undoubtedly one of the most exciting events on the musical calendar, likely because its a space where artists are free to shock and enthrall (without cussing, of course) however they see fit. The drama and spectacle throughout the years has given us endless material to reference in GIF form and for that we will be forever grateful. So, in honor of the 33rd annual Video Music Awards, let's take a look at the moments that were the most memorable.

Even in 240p, Britney damn sizzles up the screen. When she pulls out a real snake and finishes her routine with it around her shoulders, well, that just can't be topped.

Seeing this had an eight year-old me unbelievably shook. This is and will forever be the sexiest, objectively fantastic moments in VMA history (as well as, you know, history history). Never forget the camera cutting to sweet baby Justin Timberlake who looks like he saw a damn ghost. What a dream.

In an interview with Billboard, Britney's manager recounted the whole scenario, explaining Madonna was unbelievably strict ensuring Britney attended rehearsals. She then apparently gave him "a big kiss on the lips," backstage after her performance and said, "You see Larry, it was all worth it."

I think we can all collectively agree that Britney needed more time than six months between the time when she shaved her head and pulled out an umbrella, and her comeback performance in underwear heavily lip synching to "Gimme More."

Here it is, my sweets: the "who is she?"-feud to end all feuds. It kicked off some longstanding beef, followed by a brief reconciliation, a Snapchat exposé courtesy of Kim Kardashian, thousands of snake emojis, Taylor owning her snakiness and finally, a new album branded "Reputation" in Old-English font (an unfortunate choice). Hectique!

When Kanye grabbed that mic to announce his passion for Beyoncé's "Single Ladies" with a simple, "Taylor I'm really happy for you and Ima let you finish," who knew Taylor would still be mining it for content eight years later. Not me, not I.

Gaga was fresh on the scene in 2009, but this is undoubtedly one of the greatest performances we will ever see. Still deceased.

Jo Calderone is super hot and this almost-kiss could've been a real kiss and boy, how I wish it was. Also, this was a relatively slow VMAs year, save the fact Beyoncé performed pregnant with Blue Ivy and announced it on stage.

2013: Miley twerking on Robin Thicke during her Bangerz phase.

Sometime after Miley's Hannah Montana phase, came her Ashlee Simpson-esque "See You Again" phase, followed by her serious actor phase and then came Bangerz — a hip-hop-cum-pop album produced by Mike Will Made-It. During the latter, Miley performed at the VMAs in a teddy bear costume, then twerked on Robin Thicke in a latex bikini. They were the best of times, they were the worst of times.

This was absolutely amazing and beautiful and breathtaking and everyone's heart is still racing, am I right? She was also dressed in a mosaic/disco ball leotard before declaring herself a feminist. Sweet angel. I have chills.

After Nicki Minaj called out the VMAs for only celebrating a certain typer of body and not recognizing her viral video "Anaconda," host Miley got involved (as did Taylor Swift) and told her to simmer the hell down. Nicki got her revenge on stage, throwing it back to Miley and calling her "the bitch who had a lot to say about me the other day in the press." Miley then tried to recover while twirling her blond dread. Oh, you've got to love it.

What more is there to say.

2016: Beyoncé serves up a big pitcher of Lemonade

The 2017 VMAs were a big moment for Beyoncé. Her world-stopping Lemonade visual album had made her one of the most anticipated guests at the event already, but before the ceremony had even started the mother of three made headlines for arriving on the red carpet next to the mothers of slain Black men Eric Garner, Trayvon Martin, Mike Brown, and Oscar Grant.

But even that act of political wokeness couldn't properly prepare the audience for what was to come inside. After having taken complete ownership of the stage for her 15-minute BEYONCÉ takeover in 2014, she was ready to return to the same stage — but this time, for a giant 17-minute performance art piece of Lemonade favorites. Once she was introduced by a fabulous-looking Serena Williams (who referred to her as "a woman I am lucky enough to call my friend"), Beyoncé powered through "Pray You Catch Me," "Hold Up," "Sorry," "Don't Hurt Yourself," and "Formation."