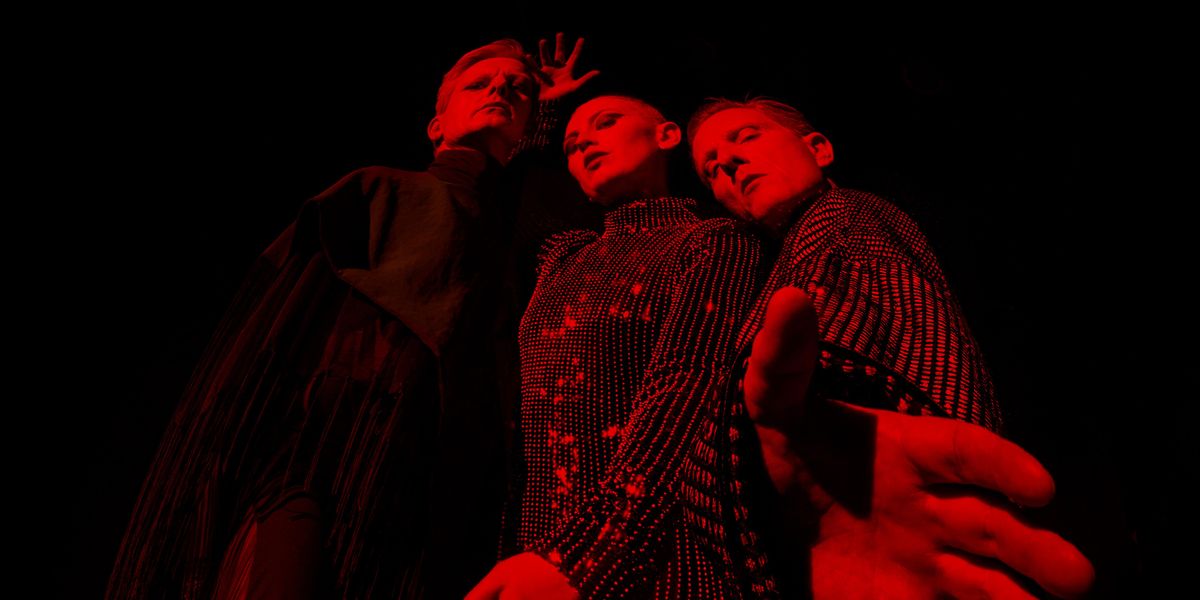 GusGus Finds a 'Mobile Home' in Our Technological World

Having been around for a quarter of a century and undergone many different transformations along the way, Icelandic synth pop collective GusGus is back with their 11th studio album, Mobile Home. Now with the addition of Vök's Margrét Rán on vocals, GusGus' latest project sees the electronic outfit pushing their sound to new heights and extremes as they parse through humanity's fraught relationship with technology and the world at large.

Ranging from the adrenaline pumping highs of tracks like "Higher" and the ambling chiptune churn of "Our World" to the downtempo broods of songs like "Love Is Alone," Mobile Home shows GusGus working with a vibrant sonic palette full of bright neon synths paired with pensive lyricism. Taking cues from '80s new wave acts like New Order or Pet Shop Boys, GusGus adds a 21st century polish to produce tracks that are equally danceable and thought-provoking.

Described in a press release "as a window into a futuristic dystopian world that has been overtaken by machines," Mobile Home explores feelings of isolation, uncertainty, pleasure and aimlessness spurred on by a reality steadily growing more and more automated. While not necessarily taking an outright technopessimistic stance, the album does ruminate on the effects of a society mediated through the black tint of a glass rectangle held in the palm of your hand.

Whether it's interrogating the mob-mentality of social media on "Our World" — "Crucified on a frame/ Approved by everyone/ You can light it up in flame/ Our world is yours to play" — or the unfettered hedonism of "Higher," Mobile Home is constantly in search of escape from our lonely reality. It may not have been intentional, but emerging from a year dominated by isolation, helplessness and fear all experienced in the growing discomfort of our own homes over Zoom calls and never-ending Twitter feeds, the message of Mobile Home feels all the more prescient without pretending to have all the answers.

PAPER caught up with the members of GusGus to discuss Mobile Home, the group's new partnership with Palomo Spain and looking back on the collective's 25-year legacy.

What was the inspiration behind Mobile Home?

Daníel Ágúst: The inspiration musically was to continue our research that we'd started on Lies Are More Flexible, where we delved into slower tempos, '70s arpeggios and '80s chord progressions. Lyrically and conceptually, it reflects our observations of the world we live in.

Biggi Veira: I think that the way the band became streamlined and was whittled down to an electronic duo in 2015 triggered a new era in mine and Daniel's minds. It felt like being in an early '80s group, like some of my favorite acts such as Soft Cell, OMD and Yazoo. We created a track called "Sustain," which featured on the album Mexico. This was one of the tracks that split up the band, being very '80s electronic infected. It was also a lot slower than most tracks we had produced before and I think it has since triggered a new direction for our experimentations — playing with "post punk," "new-wave" and other early synth revolution attitudes from that era.

What was the recording process for the album like? How did it differ from previous albums?

Daníel Ágúst: The process began 7 years ago just after releasing our Mexico album, after which we went exploring for new ideas that then came partially into fruition with the release of Lies Are More Flexible. We still felt that there was more exploring and further experimentation to do and this turned into our new album Mobile Home, which sounds very different from our older work.

Biggi Veira: What changed everything was the introduction of Margrét Rán from Vök to the group. She managed to nail down a wicked vocal on a demo that later became the track "Higher" on the new Mobile Home album. It was her aura that we needed in order to finish some of those really early ideas that we did not know how to finalize on tracks "Our World," "Stay the Ride" and "Simple Tuesday."

I love how abrasive some tracks like "Higher" and "Our World" feel. What sort of sonic palette did you work with on these records?

Daníel Ágúst: Yes, there are a few aggressive parts on this album with the aim of giving the whole experience a more dynamic feel. If it would have stayed smooth the whole time it would have been boring and vice versa.

Biggi Veira: The tracks are really emotional and the soundscapes reflect that. Combining a seemingly conflicting blend of simplicity and complexity, with a dash of over-arousement is what creates goosebumps all the way down to my calves.

The title, Mobile Home, has all these nomadic connotations that I'm sure feel relevant to touring life as an artist. I'm curious as to where the title of the album came from and what it means to you, especially in contrast to the past year where everyone lives were forced to be a lot more static?

Daníel Ágúst: It's true, our physical lives have become a lot more limited and restricted which has given our other virtual existence in the social media algorithm a super boost. We are living parallel lives, one in lockdown and the other is mobile and free. We've found ourselves a mobile home in technology.

Biggi Veira: Going higher into the conceptual layers we created, the title also reflects on how humans have still not yet found a way to make this planet our permanent loving home. We still behave like we can move somewhere else when we exhaust this one, and this rave is not very peaceful at all, though some of the chillout rooms are very nicely decorated.

You've also brought Margrét Rán into the band's fold on this. How did that collaboration initially come about and what was it like working together?

Biggi Veira: I worked with Vök mixing their EP Circles back in 2014 and came to know Margrét then. I loved her voice and that special something she has in her take on performing this instrument of hers. In The Dark with Vök was one of my favorite albums of 2019, and at the release show I met Margrét after her performance to congratulate her on the album and the amazing show they'd put on. She then asked, "When will I sing a track with GusGus?" I stumbled a bit as I was already excited at the prospect of working with her. I then sent her this strange Vangelis-Reggae-Techno demo that I had, and she sent it back with the first verse and the chorus for "Higher." With Margrét now in the equation, I felt that she was perhaps that special something we needed in order to finish some of these ideas we had previously been stuck working on. After she did her vocal piece for "Stay The Ride," we realized that she was a part of the new GusGus sound.

Margrét Rán: I was so impressed working with Biggi back in 2014 and I had been a GusGus fan for as long as I could remember. I'd always been really drawn to the electronic productions and the vocal soundscapes. That GusGus sound, which is not really like anything else, almost otherworldly. So it was always a no brainer to work more together in the future and here we are. I'm happy and proud to be a part of this new GusGus era and excited to create even more together in the future.

What do you hope people take away from this album?

Daníel Ágúst: We hope people will enjoy the music we have been making for the past few years. We put all of our emotions and observations into the music as well as the lyrics, and hopefully hidden and obvious messages will get across to our audience.

Biggi Veira: It is a bit open as to what people can extract from this album and entwine with their emotional system. I know for some it will be powerful and addictive.

Margrét Rán: I hope whoever hears it will sink deep into the Mobile Home adventure, which the boys have been working their asses off creating for the the last few years. I hope everyone can enjoy it to the fullest and hopefully enjoy me being on the ride, as well.

This album marks GusGus' 25th anniversary as a band. Looking back across the years, what have been some of your favorite moments and personal highlights so far?

Daníel Ágúst: Making the first album was a magical time where everybody felt like we were making something exceptional and significant. We were signed to 4AD and Warner Bros, and toured the USA in a huge tour bus and thought we were conquering the world, which made us feel pretty special. Making each album after that has been a highlight for everyone involved, and has expressed our diversity and portrayed our adaptability in the industry, taking us to new places mentally and physically.

What drew you to work with Palomo Spain on the wardrobe and styling for this album cycle?

Daníel Ágúst: We wandered into each other's magnetic fields by destiny. Wearing his clothes gives our souls wings and makes life more fun.

Biggi Veira: It was all about the right pick-up-line actually. We were at this Spanish LGBTQA award ceremony in Tenerife and Omar, our manager, pointed Palomo out to me and said that we needed to approach him somehow, as he was amazing designer. He showed me few of his items online and I was like, "Yes!" We then walked towards him and asked, "Nice shirt, where did you get it?" He just laughed and then we found out he was a GusGus fan. So it just clicked like that.

Margrét Rán: I'm happy to be a part of this collaboration with Palomo Spain. His clothes are such a perfect match for GusGus and I think all of us as individuals. That androgynous style that all of us represent is a match made in heaven I would say.