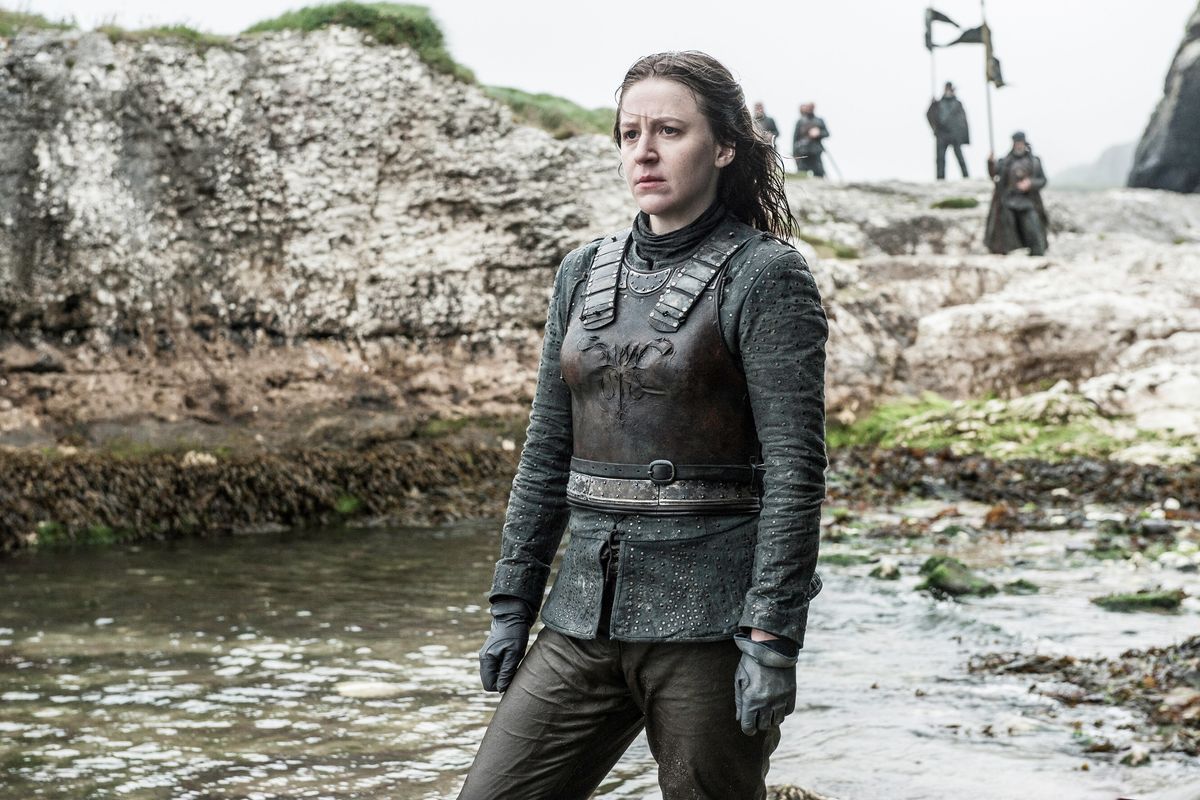 Gemma Whelan's depiction of Yara Greyjoy's swaggering bravado, rousing speeches and intolerance for the nonsense of the men in her family, was one of the many highlights of watching Game of Thrones. Remember when she winkingly half-proposed to Daenerys, lovingly bullied Theon into retrieving his will to live via a drinking game, and later literally head-butted her dumb little brother for abandoning her whilst being kidnapped (and helped him up after)?

Nearly every moment on-screen with Yara/Gemma embodied the best of Thrones: a cocktail of discomforting emotional tension, fraught conflicts of loyalty and morality, sex appeal, and dark humor. Unfortunately, Yara's character arc was seriously neglected in the meme-factory of a final season, which you might have heard concluded last night. This D&D oversight that had Twitter asking every episode:

However, because of her wise decision to spend the season taking care of her own (i.e. reclaiming the Iron Islands from her creepy, power and Cersei-thirsty uncle Euron), Yara managed to evade all of the season's icy or flaming massacres, returning in the finale as one of the sanest and sturdiest people in Westeros' population of capricious backstabbers. Yeah, maybe she was ready to follow a genocidal crypto-fascist, but at least she stuck to her word. She also became the only queer central character to survive Game of Thrones (RIP Ellaria, Oberyn, Renly and Loras Tyrell), and triumphed as one of the women in power who will shape the universe's fictional future.

While she humbly credits her costume and the show's writing, the British actress and comedian's off-beat charm and blunt, growling delivery are what defined Yara, as the rebellious queer cult queer icon she became over the show's eight seasons. Following the wrap of Thrones, Whelan headed directly into (another) gay, sexy HBO period dramedy, Gentleman Jack, in which she plays the sister of swashbuckling 1800s lesbian industrialist Anne Lister.

Leading up to last night's finale, PAPER caught up with Whelan about saying goodbye to Yara, sexuality on Game of Thrones, and what's next for her.

How did you become Yara Greyjoy? What appealed to you about her character?

The brilliant writing does a lot of the work, and the costume does the rest! I read the relevant chapters in the books to get a sense of her, but I really feel very close to who she is, so it was a delight to turn the volume up on the qualities we already share.

What were the best and the most challenging parts of playing Yara?

It's very difficult to pick a favorite part because it was such a pleasure to play her. Even when it was freezing cold and you're soaking wet! The main thing I try and do is respect the work and come up with the goods every time. Nobody wants to let the show down in any way. There's a great sense of duty to the show.

"There's a great sense of duty to the show."

What was it like to watch her become such a dominant, beloved character over seven seasons? Was it hard to say goodbye to the role?

It was an incredible privilege to become Yara Greyjoy. It wasn't hard to say goodbye to the role because all good things must come to an end, but I will carry her with me for the rest of my life. She has been so pivotal. My last day on set was very emotional, I am quite a sanguine person, but I was surprised at how many tears I shed.

How did you perfect Yara's swagger and bravado? Any tips for embodying her no-fucks attitude?

The costume helps a lot! I think everyone really wishes they could give no fucks all the time so it was a pleasure to play that.

You're also a comedian. Yara's usually pretty serious, but she's also got this great dark sense of humor. How did your background in comedy play into her character?

I think most people can find humor in the darkest moments, so hopefully I was just playing with humanity of it and her.

There's been some confusion over Yara's sexuality, or if she wouldn't be into labels at all. You know her better than anyone else — what do you think?

As she says herself... she's up for anything!

Yara was basically raised as a boy, to embody masculinity. How do you think that affected her?

I guess she didn't know any different, did she? So it made her who she is which is a total badass, but also someone who cares deeply about her family, especially her brother.

How do you think Yara would've fared if she ended up on the Iron Throne?

She'd totally own it and take it in her stride.

"I will carry her with me for the rest of my life."

No, I think it's a TV show and most people have been killed off brutally one way or another regardless of their sexual preferences.

Were you a fantasy/sci-fi fan before Game of Thrones and are you interested in doing more fantasy?

I wasn't, but I am now and I'd certainly be game for more!

Feels like Yara would be proud of your new show Gentleman Jack, all about insubordinate queer woman! Maybe she and Anne Lister would be friends (or lovers!) if their universes crossed. Tell us about working on Gentleman Jack, and playing a woman who seems very different from Yara.

She and Anne would be best friends for sure! It was an incredible privilege to work on Gentleman Jack. I am a long time fan of Sally Wainwright and Suranne Jones, so to get to perform Sally's wonderful scripts alongside the brilliant Suranne was an incredible honor. It's always nice as an actor to play a variety of roles, and to play someone so different Yara was fun. However, I love every role I'm lucky enough to land.

The final season of Game of Thrones is available to watch on demand on Sky and NOW TV.