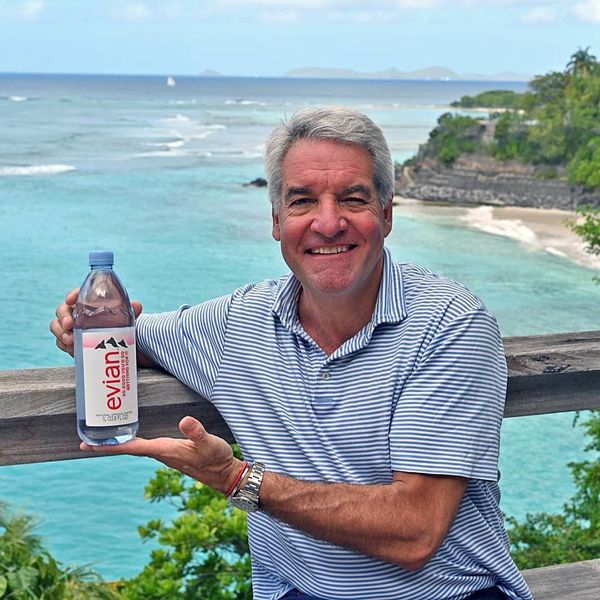 Andy King is the only person to emerge from the wreckage of Fyre Fest with a viral following and business prospects (sorry Ja Rule, the tax app is not going to happen). On the anniversary of the Netflix Fyre Fest documentary that made him famous, King revealed a new partnership with fancy water brand Evian on Instagram, including a line of bottles baring the slogan "So good you'd do anything for it."

In case your brain hasn't been broken by Twitter, the perpetually cheerful events producer went viral last year after recounting in Fyre: The Greatest Party That Never Happened, how he agreed to suck a customs officer's dick to get water shipped onto Exuma Island, as a favor to Billy McFarland.

As legend has it:

"Billy called and said, 'Andy, we need you to take one big thing for the team,'" King said. "'You're our wonderful gay leader, and we need you to go down. Will you suck dick to fix this water problem?' I literally drove home, took a shower, I drank some mouthwash. I got into my car to drive across the island to take one for the team. And I got to [the head of customs'] office, fully prepared to suck his dick."

Congrats to Andy on his first sponcon! He joins a long line of prominent Evian partners, including Lea Michele, Luka Sabbat, Maria Sharapova and Kylie. Of course, if anyone deserves to profit off the Fyre Fest scandal it's certainly not King, but rather the Bahamian business-owners and service and construction workers who got more fucked over than any attendee or investor. But you have to hand it to King, who has "FYRE Festival Survivor 🏃🏻" in his Instagram bio... lemons, lemonade, etc.