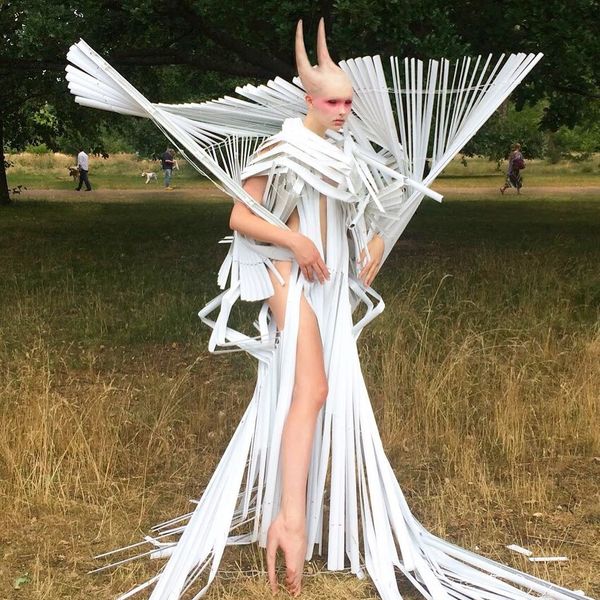 Fecal Matter Made Their Nightmare Heels a Reality

Montreal fashion duo, Fecal Matter, is known for their otherworldly designs, best described as H.R. Giger dropped in the middle of a '90s warehouse rave. The pair blurs the boundaries between costume and couture in a way that is exciting and a little bit scary. Their designs incorporate a variety of nightmare cage-like accessories, gravity-defying heals, and prosthetics reminiscent of 2009 movie Splice, to imagine a future where body modding is taken to grotesque extremes.

Having garnered a 300k-strong following online, Fecal Matter has achieved their looks through a mix of makeup and digital manipulation, selling bespoke garments on their own Depop, until now. Vogue broke word today that the duo has made their viral skin heels a macabre reality.

With long flesh-covered spikes jutting out and perched on top of a plastic disc, the skin heels are truly an impressive feat of optic trickery. A brushed aside skirt reveals that the form-fitted shoe extends all the way up to the thigh to give the easily-concealed illusion. In the interview with Vogue, Steven Raj Bhaskaran of the duo said that they wanted to put out the shoe to prove to the world that they were more than just a Photoshop gimmick.

As for the price tag on the freakish footwear? A cool $10,000. But that is a small price to pay for having potentially one of the most insane Halloween costumes ever seen.