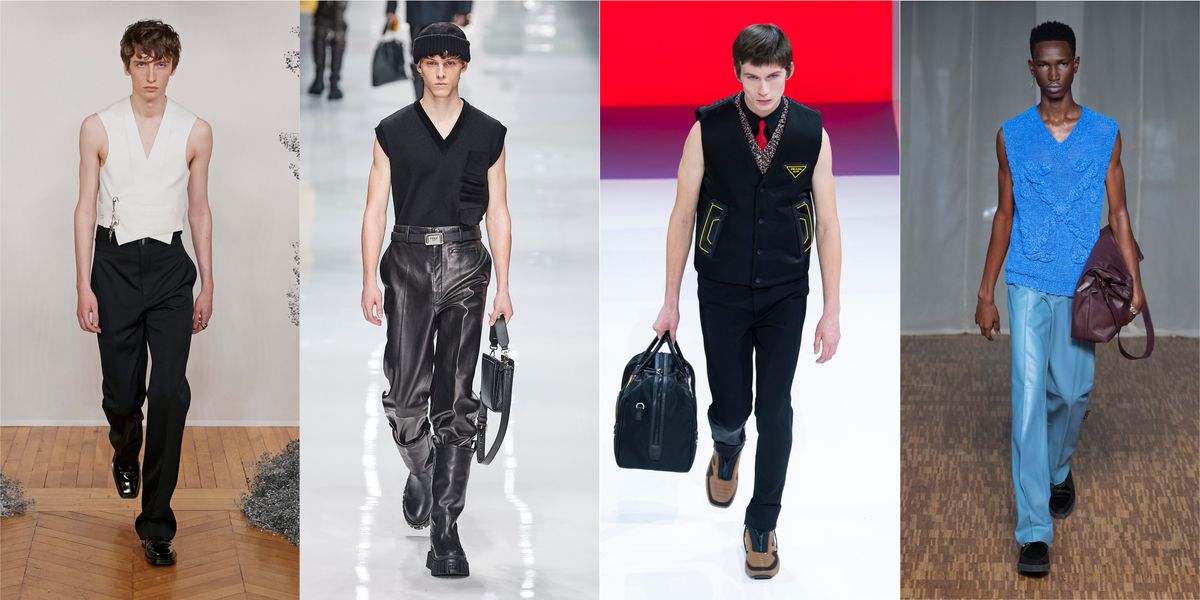 What feels as though it started the day after New Year's finally ended on Sunday — the four-leg tour of menswear shows for Fall 2020, where collections were showcased in London, Florence, Milan and finally Paris. With the new decade upon us, designers explored a variety of themes this season as it relates to how men should feel free to dress.

The biggest takeaways revolved around two major concepts: The idea of childhood, vulnerability and innocence, and the modernization of traditional couture designs. Turning back the clock to a time where one can see the world (and clothes) through the eyes of a child were a big theme at Gucci, Loewe and Louis Vuitton, while the focus on haute couture techniques made waves at Dior Men, Givenchy and Valentino.

This resulted in a curious tension between the two, as on one hand designers sought to evolve traditional dress and business codes for men, while on the other, many looked toward the archives from past couture collections. What's clear, however, is that the tides are shifting. We saw a return to elegance begin to form last season, with less and less streetwear tropes infiltrating the runways.

For Fall 2020, this became even more pronounced, with some designers avoiding sneakers on the runway altogether, while others treaded more cautiously with a sort of street/tailored hybrid. Either way, there was a stronger sense of individuality this season, much like we saw in the women's shows, with unique styling cues, unconventional materials and new colorways being introduced. If there's one unifying theme, it's that the old rules of dressing are continuing to be broken down.

From windowpane checks on traditional suiting at Fendi to neutral gingham patterns at JW Anderson, plaids came in all shapes and forms this season.

Everyone from Prada to Etro interpreted the classic menswear fabric into modern iterations in unexpected colors and silhouettes.

Wear It On Your Hip

The crossbody bag was the most popular accessory for fall, whether it's an oversized hobo bag at Rhude or a bag worn all the way down to your knees ala Marni.

The Gloves Come On

From short length gloves at Telfar to the longer embellished opera versions at Dior Men and everything in between, there's no limit to how designers are personalizing the cold-weather accessory this season.

One Color Fits All

One of the biggest trends from the women's season, the monochromatic looks trickled over into menswear with head-to-toe single hues in a variety of colors.

Whether it's a slouchy jacket from Random Identities or a boxy striped suit from Martine Rose, the oversized tailored look remains a popular look.

Puffers are no longer just relegated to outerwear, as the material was incorporated in everything from pants like Telfar or single sleeves ala Undercover.

Perhaps the biggest trend to emerge from Milan, the sleeveless look dominated the runways in Fendi and Prada with Paris coming in close ala Givenchy.

The return of elegance and sophistication, a concept that started to emerge last season, made a big splash for Fall 2020, with Officine Generale and Ferragamo leading the way.

From cargo pockets at Louis Vuitton to buckle straps at Rhude, utility gear was seen on all the runways this season.