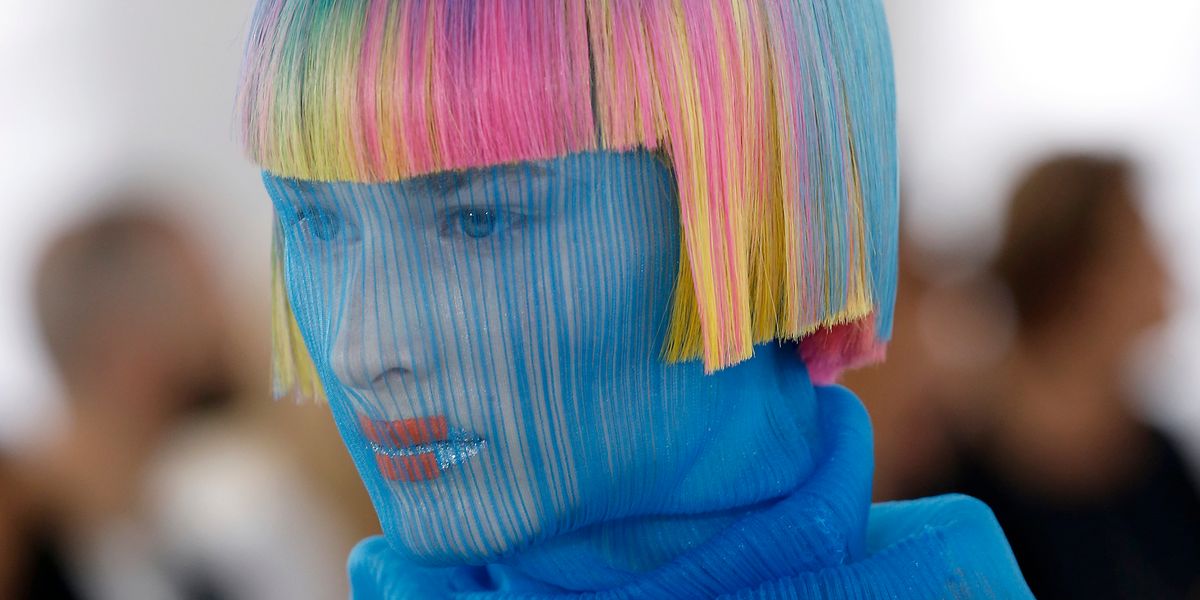 Eugene Souleiman has clocked more than three decades in hair styling, helming the creative divisions of major beauty corporations from L'Oreal to Vidal Sasson, while also simultaneously styling for celebrities like Lady Gaga. His dynamic portfolio boasts some of the biggest names in fashion like Maison Margiela, Yohji Yamamoto, Chloe, Celine, and Chanel, among others.

Yet the former Creative Director at Bumble & Bumble hesitates to reduce modern hair-styling to trends, scoffing at the notion of ultra-stylized hair that looks unnatural: "We're not looking at beauty in such a visual way anymore, we're kind of feeling it. Beauty is about the person and enhancing the person and making them feel more beautiful. Not conforming. It's creating a look around the person that's their look. Not one look for everybody."

"We're not looking at beauty in such a visual way anymore, we're kind of feeling it."

As the current Global Creative Director of Care & Styling for Wella Professional, he has a precise vision, shared by the likes of Khaite, The Row, and Jeremy Scott — the three main shows he'll be styling during New York Fashion Week.

Talking with PAPER, Souleiman breaks down what looks will reign, his top hair predictions for the season, and what modern beauty means to him.

Tell me about the shows you'll be working on this season

One of the most exciting brands I'm working with this season is Khaite. It's a young designer and I guess the best way to describe them would be like the American Céline — I mean, the old Céline not the new Celine [Laughs]. It's a really chic show. It's quite diverse and the whole show is based on feminism throughout the ages. I'm also doing The Row and Jeremy Scott. Normally, I would have done Thom Browne and Tommy Hilfiger, but they're not showing in New York. So this season it's only three, but normally I do about eight shows.

Can you tell me a little bit about the looks you'll be creating for them?

I've only done one fitting. It's a little bit early for me to say. But I guess the New York shows, aside from Jeremy, are going to be based in the real world, in terms of hair. I think America is such a huge country, each state here is like a country, so there are lots of different elements you have to consider. When I'm here, what I do has to really make sense; my point has to be clear and work for the diverse audience. The way to make something clear is to keep it in the real world, give it a reality. I mean obviously there's a dream and aspirational aspect to it but in terms of hair, it has to be wearable and translate to the woman. Beauty in America is still perceived in the traditional sense where people want a woman to look cool, beautiful, and intelligent, but also feel healthy. That plays a big part in how I start styling. For me, it's really about things that are achievable; they're not like the McQueen or Margiela shows, which I've done in the past.

So you're saying nothing too dramatic?

Yeah, I mean crazy stuff. Simple doesn't necessarily mean that you don't care or it doesn't look good, it just means that you have a different mindset that's more paired down. I think there's something really nice about doing something that's a bit more personable. I kind of like shows that have a sense of empathy to women of color, or to women that are from different backgrounds. It doesn't narrow down our vision of beauty and it really gives a lot of people more options. In beauty today, we're really catering to everyone and I think that's a really good thing.

Also, when you're moving away from the crazy, over-the-top hair, it's just much harder to communicate your aesthetic. It's not something that you can talk about, right? It's something you feel. For New York Fashion Week, what I'm trying to do is make people feel more beautiful and enjoy their hair. I quite like the idea of doing someone's hair and they can just go out afterwards feeling great. There's a very fine line we're walking as hairdressers. What we're trying to do is trying to keep strength in a woman but still retain an element of femininity, which is very hard because normally when you think about strong people, you think about severity. So I think we have to kind of find a balance, a meeting place.

What I trying to do right now to do is to create something that's not very easy, where the hair feels as if it's air dried but styled at the same time. I want people to ask, "did she style her hair or did she not style hair?" where the hair looks really good, so you're thinking "she must have done something to it." So that's kind of where we are.

What would be some of your major hair and beauty predictions for the season?

I think it's so early to say but there's an intelligent, kind of minimalist femininity involved in styling now. It's not vulgar, masculine, asexual, androgynous, none of that. It's really about creating hair that has a soft sharpness to it. I think hair away from the face is really great. A lot of women at the moment don't have the time to do their hair, and you'd probably put more makeup on than do more to your hair, right?

That doesn't mean we're not doing anything to hair. It's more about styling hair in the real sense and not thinking about it as a picture.It should be hair that you're not afraid to touch. I kind of want it to feel like hair, and not something that's so precious. It's like when you use high heat on a straightening iron and the hair looks perfectly straight, but when you touch it, it doesn't move. There's no life in there that can make it do anything, right ? And I'm thinking maybe you should've turned the dial down. To me it's not really beautiful, whereas hair that has a little bit of life to it, is. There's fluidity to it; it looks believable. If there is a trend, it's kind of where it is achievable and less labored. What we're doing is looking at women as muses and not mannequins. There's a different kind of mindset.

What do designers feel about it?

So you see, we're not looking at beauty in such a visual way anymore, we're kind of feeling more. Beauty is about the person and enhancing the person and making the person feel more beautiful, not conforming. It's creating a look around the person that's their look, not one look for everybody. Everything feels more bespoke, it feels customized. Before you could do a fitting in two hours, now it takes seven hours. At Margiela, our fitting's like four days. Everyone's a character, even though they're a crazy character, but they're a character. The age we're living in, people are receiving a lot more information. But what it does is it kind of gives them a lot more options and people want to see a lot now.

Do you have any product recommendations for different kinds of hair?

We're working with a lot of natural textures this season. For the Khaite show, we're working with a lot of curly hair and women with curly hair use a lot of hydrating products, so we're using a little bit of the extra volume mousse. Then we re-hydrate using keratin spray oils. Some girls have thin hair, so for them, we're using a lot of lighter products. Sugar Lift is one of my favorites because there's no hydration in it, so it creates a kind of fullness. So you're combining a lot of products; it's really kind of similar to having a pop up salon backstage at the shows. A lot of stylists and designers are sensitive to the kind of women they want in their shows; they want diversity because they want it to relate to everyone. That's the objective of the game and not to segregate and stick to one market. That works for a year or so, because you just cut a lot people out of the equation.